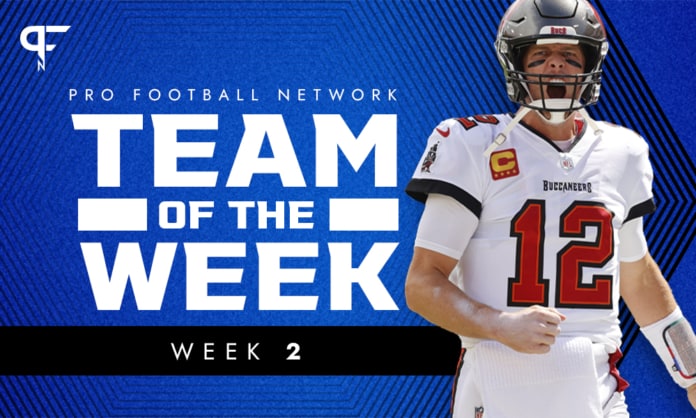 The NFL Team of the Week in Week 2 is a who's who of NFL greats and burgeoning stars. Who made the cut after this week's action?

Just like in Week 1, the second week of the NFL season was dominated by some incredible individual performances on our NFL Team of the Week. Whether it was 5 touchdown passes, long plays, or dominant defensive stands, some of the world’s best athletes were on display in Week 2.

NFL Team of the Week for Week 2 | Offense 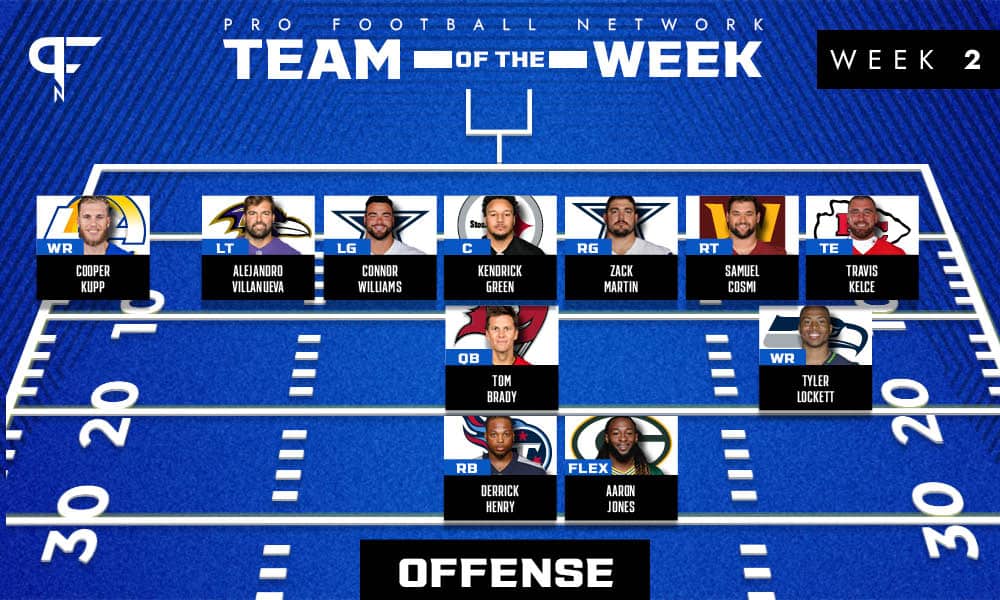 Much like last week’s quarterback on our Team of the Week, Tom Brady threw 5 touchdown tosses in a dominant victory over Atlanta. Brady completed 24 of 36 attempts for 276 yards and 5 scores, including 2 touchdowns each to Rob Gronkowski and Mike Evans.

When you carry the ball as many times as Derrick Henry, you’re bound to break one. Doing so without breaking something on your own body is another task. Henry is a testament to what hard work and determination can achieve week in and week out.

The fifth-year RB carried the rock 35 times for 182 yards and 3 touchdowns in Tennessee’s come-from-behind victory. Henry sparked the comeback when he broke contain and jetted up the field for a 60-yard touchdown in the fourth quarter. He was also integral in the Titans’ efforts to tie the game and eventually win in overtime.

The Cooper Kupp breakout season has been confirmed after he posted 163 receiving yards and 2 touchdowns against the Colts. Kupp hauled in 9 receptions and moved the chains more often than not. He’s become a valuable target for new Rams QB Matthew Stafford, and that doesn’t look like it’s changing anytime soon.

The NFL’s most underappreciated receiver keeps showing up and showing out. Tyler Lockett once again hauled in a dramatic string of receptions, including a 63-yard touchdown reception against Tennessee. He finished the game with 8 catches for 178 yards and 1 score.

What more can you ask of your tight end than a 7-catch, 109-yard output through the air? Despite the final result for Kansas City, Travis Kelce put up those numbers and chipped in with solid effort in the blocking game. He has recorded at least 1,000 yards in six straight seasons and looks well on his way to repeating that feat in 2021.

The Packers got back in the win column on Monday night, with a big thanks to Jones. Finally alone in the backfield, Jones scored 4 total touchdowns, 3 of which came through the air. With the hot hand, the Green Bay offense looked a lot like a college offense in ways they manufactured touches for Jones.

Whether it was a pop pass for his first score, flare-outs in the red zone, or glorified screen passes to the boundary, Jones was seemingly unstoppable in the passing attack. He totaled 115 yards from scrimmage and 5.0 yards per touch.

It was hard to miss Alejandro Villanueva on Sunday Night Football — literally. Between his massive 6’9″ frame, close-ups of his blocking, and the discussion of his jumping out of airplanes, the former Army Ranger was prominently featured on the broadcast. However you saw him, Villanueva was routinely dominating Kansas City defenders.

Making the switch to left tackle after a lowly effort at right tackle last week, Villanueva looked much more comfortable. He was dominant in pass protection and more than the Chiefs could handle on the ground.

Connor Williams may have taken a backseat to his dominant guard teammate in Zack Martin. Yet, his performance was just as impressive. Williams moved well to the second level after holding his own at the point of contact.

He’s moving nicely and quickly becoming one of the league’s top left guards. With more play like this, Wiliams will land on our Team of the Week more often.

The only player keeping Pittsburgh’s offensive line — or maybe the team’s offense as a whole — churning on Sunday was Kendrick Green. The third-round rookie showed grit and tenacity, routinely finding defenders to flatten or rushing lanes to carve out.

Green constantly sparred with Raiders defensive linemen and came to the aid of his teammates on more than one occasion. The immediate future may not be bright for Pittsburgh, but they’ve already got a cornerstone center.

What more can you say about Zack Martin? An All-Pro and perennial Pro Bowl player, Martin returned to the lineup in Week 2 and didn’t look back. He was singled out during the national broadcast on multiple occasions, and for good reason.

Mauling defenders at both levels, Martin was also barking out calls and making adjustments at the line of scrimmage like the seasoned veteran he is. He was absolutely integral to Dallas’ victory over the Chargers.

Yes, another former Texas Longhorn on the NFL Team of the Week. And yes, another athletic, dependable player on an NFC East offensive line. Samuel Cosmi was awesome on Thursday night, moving well and batting defenders down like flies in the wind. Cosmi’s run blocking was perhaps most impressive as he got out in space and flattened Giants en route to the victory.

Next Page: Team of the Week | Defense and specialists