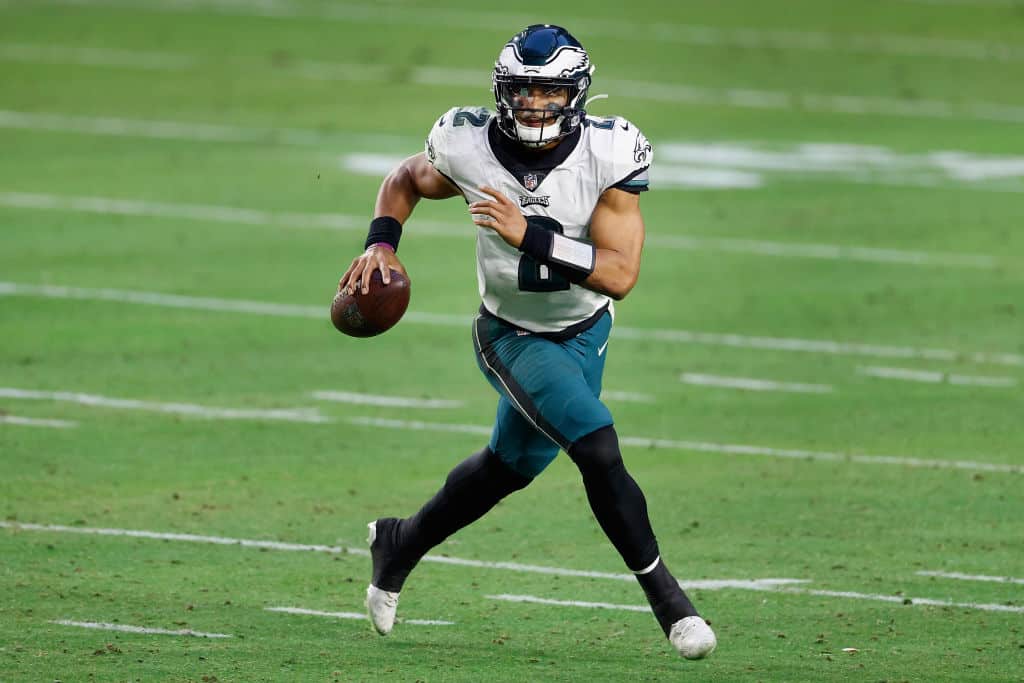 With the all-important championship matchup looming, Pro Football Network is here to answer all of your NFL Week 16 start ’em and sit ’em fantasy football questions. If you find yourself wondering who you should start this week, make sure to read our comprehensive guide below. Can Jalen Hurts bring you a fantasy title? Is Mitch Trubisky the savior we all expected him to be?

Jalen Hurts has the ability to put up Lamar Jackson and Kyler Murray numbers this week against a Cowboys defense that is allowing over seven yards per passing attempt and a league-high touchdown rate.

Hurts is one of the easier start ’em or sit ’em options in Week 16. Looking at last week, he was able to get it done on the ground (63 yards and a touchdown) while also seeing success in the air with 338 passing yards and three TDs.

Something I never thought I would be saying, but Mitch Trubisky has been balling! In one of the more surprising turn of events this season, Trubisky has been averaging almost 10 yards per pass attempt. He has a juicy matchup this week against a Jaguars defense that has allowed multiple touchdown passes in eight consecutive games.

Justin Herbert has easily been the most impressive rookie quarterback of the 2020 NFL Draft class. Last week against the Las Vegas Raiders, Herbert carved up their defense for 314 yards and two touchdowns while adding a rushing touchdown for the game-winner.

Herbert set a new rookie record by recording his seventh 300-yard passing game this season. He now has 27 TD passes this year, tying Baker Mayfield for the most passing touchdowns by a rookie in NFL history. Look for him to break that record this year. Herbert is one of the most consistent start ’em or sit ’em quarterback options of the year.

Even without all of his pass-catching weapons, I still think Baker Mayfield can carve up this awful New York Jets defense. Look for a slew of passes out of the backfield to Nick Chubb and Kareem Hunt.

Sitting any QB against this vaunted Steelers defense is usually a smart strategy. That is even more so the case when they are at home. Even though Rivers has performed well this season, look for the Steelers defense to take out some of their frustrations from last week’s loss.

The same that was said above can be repeated for the Steelers. This Colts defense has been impressive against the pass, and Roethlisberger is struggling mightily right now. This is not the spot for him to get his groove back.

Along with Mitch Trubisky, David Montgomery has been balling in fantasy football. In each of his last four games, he is sporting over 100 total yards. This week, he takes on a Jaguars defense that allows over 150 rushing yards per game to its opponents. Look for Montgomery to have another huge game.

Jalen Hurts has opened up the running lanes for Miles Sanders, who has shined the past two weeks while carrying the Philadelphia Eagles backfield load. This week, he faces a Cowboys defense that is allowing five yards per carry.

I expect another high scoring affair here, which means that Sanders is likely to get in or near the end zone once or twice.

Wayne Gallman was the fantasy football surprise of the year when he took over for the injured Saquon Barkley.

Unfortunately, he has been less than impressive the last two weeks. I don’t know if that is going to change against one of the best run defenses in the NFL. With a hobbled Daniel Jones likely to make his return, the Ravens can stack the box without fear of the pass.

Julio Jones is out again this week, which opens the door for Ridley to explode against a Chiefs secondary ranked third in the league in points allowed to opposing wide receivers. Ridley is averaging over 100 receiving yards the last three weeks, so be sure to get this guy in your lineup!

Like we said with Calvin Ridley, the same can be applied to Russell Gage. With Julio Jones out of the lineup, look for Matt Ryan to spread the ball around much more. The Chiefs are arguably the best team in the NFL, but they can be scored on. The game script likely compels the Falcons to keep throwing.

The Eagles secondary is terrible. With Cooper coming off one of his worst performances of the season (two catches for 10 yards), I expect the Dallas Cowboys to try and get their star WR more involved. The Eagles have allowed more than 290 passing yards in three straight games.

With Daniel Jones returning, you would think the Giants pass catchers would see a boost in fantasy football value. Unfortunately, a less than 100% Daniel Jones does not inspire any confidence. Slayton would probably be better off with Colt McCoy under center.

Dallas Goedert plays in almost 90% of the Eagles offensive snaps and receives over 15% of the target share. Even with Zach Ertz active, Goedert has taken over the lead TE role. You have to follow one rule in fantasy football this year, and that is starting all your pass catchers against the Dallas Cowboys secondary.

Be sure to follow us on Twitter: @PFN365 to stay up to date with all things around the NFL and the 2020 fantasy football season beyond start ’em and sit ’em for Week 14! Also, continue to visit Pro Football Network for NFL news and in-depth analysis while also visiting our fantasy football section for more coverage and up-to-date rankings.