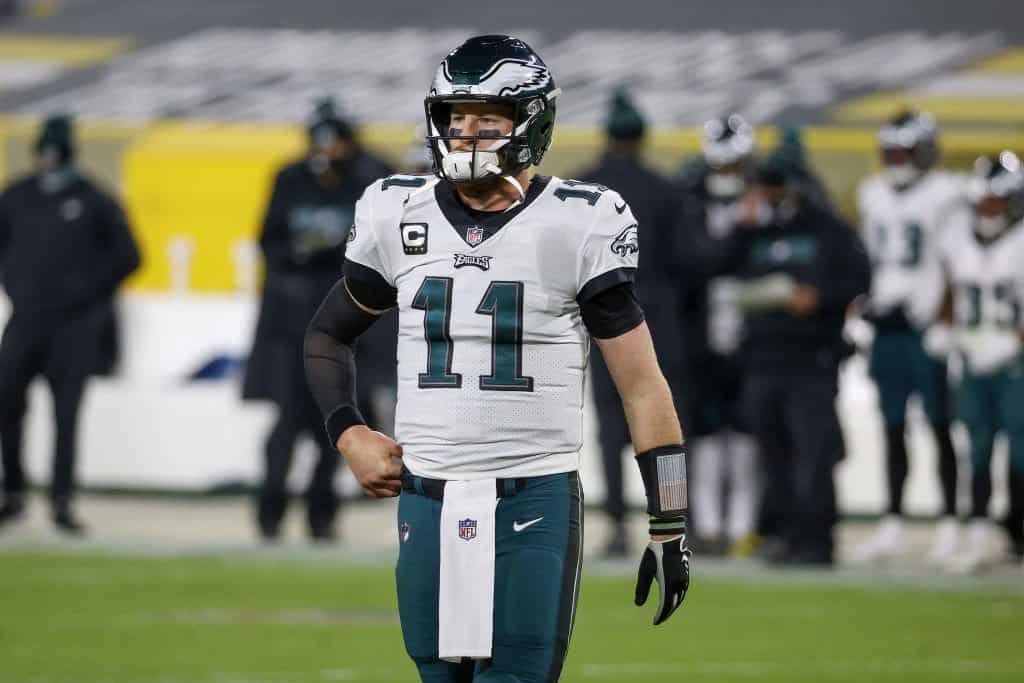 GREEN BAY, WISCONSIN - DECEMBER 06: Carson Wentz #11 of the Philadelphia Eagles walks across the field in the third quarter against the Green Bay Packers at Lambeau Field on December 06, 2020 in Green Bay, Wisconsin. (Photo by Dylan Buell/Getty Images)

December is upon us, and the NFL and college football seasons come closer and closer to an end. Tony Pauline dives into his mailbag to address some of your questions on NFL rumors, college football, and NFL Draft news.

Do you want to submit a question to Tony?

This week’s installment will cover my 2021 NFL Draft prospect rankings, what’s going on in Pittsburgh with Ben Roethlisberger’s replacement, Ja’Marr Chase vs. DeVonta Smith, the safest picks in the 2021 NFL Draft, and much more. First, we start with the moving pieces in the Philadelphia Eagles organization.

What kind of changes do you expect in Philadelphia for the rest of this season? Is Carson Wentz headed to the bench? Will Howie Roseman and/or Doug Pederson survive?

Obviously, the news broke that Carson Wentz is being benched this weekend since this question was submitted. While I doubted it would ever come to that, I also didn’t think Wentz’s play would continue to get worse.

As I said on last week’s podcast, league sources tell me the Eagles “could” fire Pederson. Much will depend on what happens in the final month of the season to see how this NFL rumor shakes out.

It’s unlikely Roseman is going anywhere. Besides the fact that owner Jeffrey Lurie leans on Roseman for knowledge and decision making, Howie has had a lot of success with that organization. And let’s not forget what happened the last time they pushed Roseman out of the picture; it turned into a disaster for the Eagles.

I know you have Ja’Marr Chase as your WR1 in the 2021 NFL Draft. But with how DeVonta Smith has performed this season, is there a chance Smith is the first receiver off the board?

There’s always a chance, but it’s a minimal one. Smith has played incredibly well this season and will end up with a big bump in his draft stock.

Ja’Marr Chase has a sturdier build and slightly better playing speed. He was equally as incredible last season for LSU.

Due to lack of tape/opportunity for so many players in their final college seasons in 2020, do you think many NFL teams may choose to trade out of the first round of the NFL Draft because of the scouting uncertainty?

Highly unlikely. Teams may trade out of the first round, but it won’t be due to uncertainty over the players available. Except for a few players who opted out, there will be plenty of tape on 99 percent of the top 99 players. And most of those who have opted out have plenty of tape prior to this season to focus reports on.

Do you think it’s time for the Pittsburgh Steelers to find the eventual replacement for Ben Roethlisberger as his NFL career nears its end? Have you heard any rumors that the Steelers may be in the QB market for the 2021 NFL Draft?

I’m sure if a highly-rated passer drops to them in the first round, or if a good signal-caller is available on Day Two, the Steelers will consider drafting one. I’ve heard of no particular quarterbacks of interest to them at this point.

Have the draft stocks of Shaka Toney and Jayson Oweh dropped amidst PSU’s struggles?

Toney’s draft stock has dropped because of inconsistent play. He shows up one game and looks terrific, but then he disappears for games at a stretch.

I was never a big believer in Oweh. He was always more potential than production or consistent dominance, which is why I’ve always had him rated much lower than most.

Have you heard any NFL rumors around who the Falcons might be interested in as their next head coach?

Right now, the belief is that owner Arthur Blank is going to make a big push for the combination of Eric Bieniemy and John Dorsey to accept the roles of head coach and general manager.

We will have a ton of head coaching updates during Wednesday’s live Draft Insiders podcast.

Who do you think is the safest pick in next year’s NFL Draft?

What are your thoughts on Cincinnati QB Desmond Ridder? I see you have him as a third-fourth round prospect on your big board. Might there be an NFL team tempted to take him early on the second day?

Ridder is a good athlete with a solid arm, and he’s a quarterback who makes good choices. I think he has upside, but also that he would really benefit from another year at the college level.

He needs to fine-tune his mechanics; Ridder gathers himself before delivering the ball, and he also needs to improve his downfield accuracy.

The Bearcats have several underclassmen, primarily James Hudson and Myjai Sanders, who are good next-level prospects but would benefit from another year on the college field.

Do you think that Steve Sarkisian is on the radar as an NFL head coach, or will he stay at Alabama — heard any rumors?

I don’t think he gets a job in the NFL, but I do believe he will be interviewed for any number of head coaching jobs that open up at the college level.