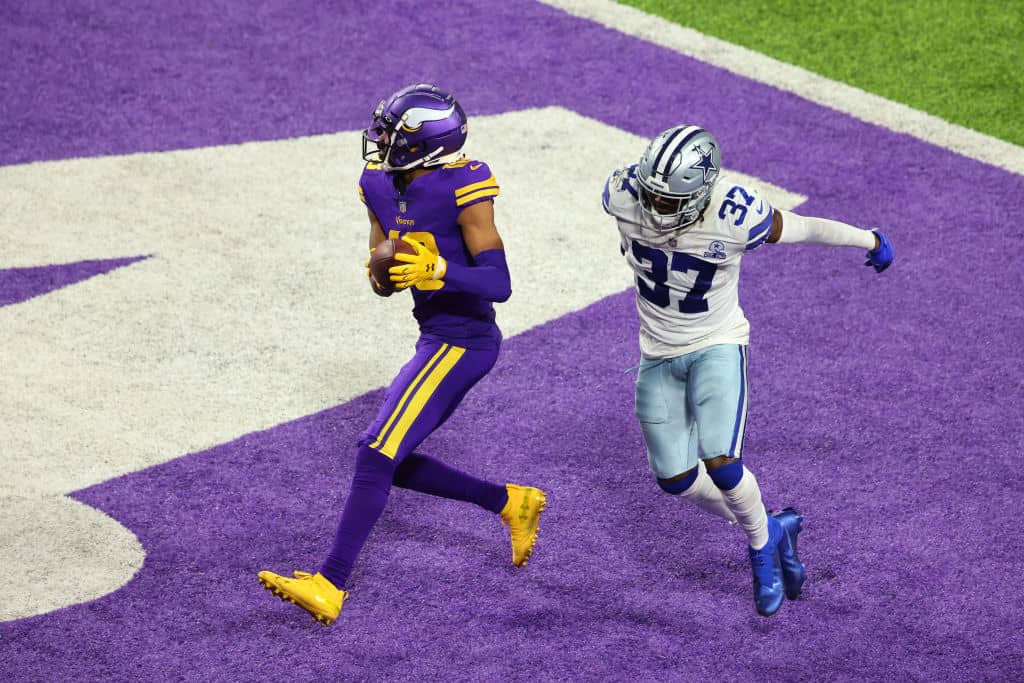 MINNEAPOLIS, MINNESOTA - NOVEMBER 22: Justin Jefferson #18 of the Minnesota Vikings celebrates following a touchdown catch in the fourth quarter during their game against the Dallas Cowboys at U.S. Bank Stadium on November 22, 2020 in Minneapolis, Minnesota. (Photo by Adam Bettcher/Getty Images)

Tee Higgins struggled mightily against Washington, as he’s not a natural separator and Washington CB Ronald Darby stuck to him like glue for the entire game. Higgins wins with elite concentration at the catch point combined with strong hands and great body control, but he will have struggles against bigger cornerbacks that can contest the ball in the air easily. Now that Burrow is out for the season, will Higgins’ production drop?

After a quiet game last week, Antoine Winfield Jr. was everywhere for the Tampa defense, registering nine tackles. In the second half of the season, he hasn’t been quite the dominant safety some think, but he’s still been excellent for Tampa Bay’s defense — one of the draft’s biggest steals and still one of the top NFL rookies. For now, Winfield sits right in the middle of our NFL Rookie Rankings Week 12.

The Lions struggled on offense without star rookie back D’Andre Swift and receiver Kenny Golladay, but Jonah Jackson still managed to play quality football. He’s been as consistent as any rookie offensive lineman and will be a major building block for whatever coach the Lions have starting in 2021. His athletic ability limits Jackson’s upside, but his nasty attitude and natural power make him a likely Pro Bowler in the future.

As the season progresses, Patrick Queen continues to improve. Someone I was personally low on during the draft process, Queen has done a great job fixing parts of his game that held him back, and he’s been transforming into a complete linebacker over the course of the season. Against Tennessee, he recorded nine tackles and a QB hit.

Jaylon Johnson was on bye this week but is still the undisputed top NFL rookie cornerback. He’s among the league leaders in passes defended and has been an immediate contributor on one of the most talented secondaries in the NFL. With a little more help, opposing teams will struggle to keep up throwing against this Bears secondary. This won’t be an easy task for the next half-decade.

James Robinson faced the top defense in football when the Jaguars hosted Pittsburgh. The vaunted Steelers defense had been wreaking havoc on opposing ball carriers, yet Robinson managed to have a productive day against the steel curtain. Posting 73 rushing yards and adding another 21 yards through the air, Jacksonville might have been completely outclassed, but Robinson was their best player on Sunday. He has been the top NFL rookie running back through this point in the season.

Antonio Gibson found the end zone for the fifth time in his last four games and now leads all rookie rushers in touchdowns. He also posted 94 rushing yards on 5.88 yards per carry, and another ten receiving yards. Gibson takes on Dallas in a Turkey Day showdown, and a huge game could have him overtake Robinson for rookie RB1. Will he take advantage of the opportunity, or will Dallas have an answer for him after he shredded them in their last meeting?

Jeremy Chinn was quiet in his game against Detroit, but the Panthers defense kept the depleted Lions offense from scoring at all. Chinn registered four tackles in the game. He’s done a great job utilizing his athletic ability to make plays near either sideline, but he still has growth to do in his processing and coverage abilities. If he can put it all together, he’ll be a terrifying weapon for Matt Rhule’s defense. He’s already producing like one of the top NFL rookies.

Clyde Edwards-Helaire was in desperate need of a big game, as he was starting to tumble down the rankings and in danger of falling off these Week 12 NFL rookie rankings completely. His response was a game with 69 yards and two touchdowns against the Raiders. As mentioned in many of these earlier rankings, Edwards-Helaire is one of the top NFL rookies, but his role in a loaded Kansas City offense will be volatile for the season’s entirety.

Jerry Jeudy wasn’t superbly productive in Denver’s win against Miami, but he made plays when he needed to. He only caught three of his eight targets, but that’s more a product of ball placement than anything. Jeudy has been one of the top NFL rookie receivers after the catch, as his change of direction is already among the elite in the NFL. If the QB play in Denver can achieve any level of consistency, Jeudy could be a real weapon.

A bye week halted Brandon Aiyuk’s streak of awe-inspiring performances, and now an appearance on the “sick” list could further slow him down. We’ll see if he’s cleared to play by Sunday, as he’s a major factor in the San Francisco gameplan. Regardless if he plays this week, though, the 49ers have to be excited about the electricity he brings to the offense as he’s been on the NFL’s most explosive top rookies.

D’Andre Swift was unable to play in this past week’s game, and it was evident by the way the Lions performed on offense. Swift was skyrocketing the rookie RB rankings until this week. Now with Robinson, Gibson, and Edwards-Helaire all having a strong Week 11, Swift will need a big performance this Thanksgiving to continue his upwards trajectory. He has a favorable matchup against the Texans struggling defense. Can this Thanksgiving matchup kickstart a late-season surge for Swift where he cements himself as one of the top NFL rookie running backs? (Editor’s note: Swift indeed was not able to suit up versus the Texans on Thanksgiving).

I was one of the few who had Derrick Brown outside my overall top 10 going into the draft, as I had him at IDL2 behind Javon Kinlaw. However, over the past few weeks, Brown has really started to put it together as a pass rusher. He’s yet to register his first sack, but he’s accumulated four QB hits in the past three weeks, and he’s already an elite run defender. It’s about time Brown starts getting recognized as one of the top NFL rookies.

Unlike Brown, Kinlaw has recorded 1.5 sacks on the season, and he flashes more as a pass rusher. However, what separates the two is how consistent Brown has been and how elite a run defender he already is. Kinlaw still possesses more desirable traits, and his pass rush upside is palpably higher. It’s pretty uncommon for rookie interior pass rushers to be a force out of the gate. Kinlaw’s best days are ahead of him.

Damien Lewis was an easy evaluation. He’s an elite run blocker with violent hands and natural power, but a lack of athletic ability and foot speed limits him to an average at best pass protector. So far through his rookie season, that evaluation is extremely accurate. Lewis has carved open rushing lanes for the Seahawks job and has done a serviceable job protecting Russell Wilson. He should be a starter in Seattle for a long time. Lewis enjoys his first appearance on these top NFL rookie rankings.