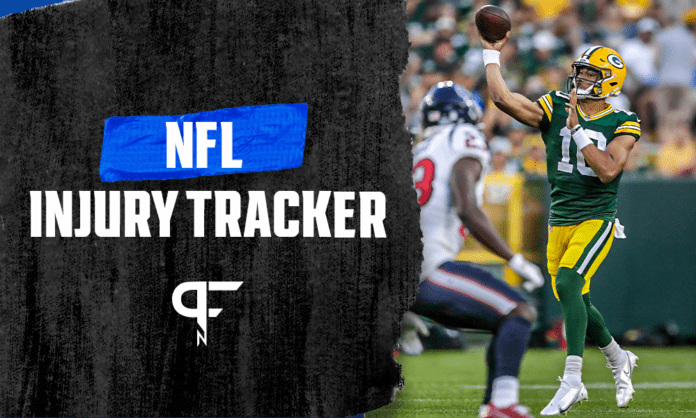 With just one NFL game on Sunday, Week 1 preseason action is all but in the books -- here's the latest on injuries from around the league.

Curtis Samuel is finally back. Jordan Love is “dinged.” And a handful of notable players are dealing with concussions. Those are some of the biggest storylines included below in our NFL preseason Week 1 injury rundown.

Samuel had spent the first two weeks of training camp on the Physically Unable to Perform (PUP) list after suffering a pretty significant groin injury during spring ball. WFT will play it safe with him in the coming weeks. However, Samuel appears to be on track for Week 1.

Samuel, who signed a three-year, $34.5 million free-agent contract with Washington in the offseason, also spent time on the reserve/COVID-19 list this training camp. Given the organization’s play-it-safe approach with injuries, it’s a long shot — at best — he appears in Friday’s exhibition game against the Bengals.

Jordan Love, perhaps the most polarizing backup quarterback in football, played the first half of the Packers’ preseason game against the Texans. Nonetheless, Matt LaFleur had actually planned for Love to play more.

Those plans changed when Love “dinged” his throwing arm and shoulder on a sack-fumble late in the second quarter. While the sense Saturday night was that Love’s injury wasn’t particularly serious, NFL Network reported Sunday Love will go for further tests on Sunday morning to make sure he didn’t suffer anything more than a strain.

“It was obviously just a precautionary reason, but I think I’ll be ready to go next week,” Love said after the game.

According to ESPN’s Adam Schefter, the MRI on Love’s shoulder came back clean and he is unlikely to miss time. Before his injury, Love had completed 12 of 17 passes for 122 yards and a touchdown.

There has to be some level of concern about Houston Texans wide receiver Anthony Miller’s availability for the opener. The wideout suffered what coach David Culley described as a “slight” shoulder dislocation.

Miller’s injury occurred while making a catch in the second half of Houston’s win over Green Bay. The Texans have scheduled him for an MRI to determine the severity.

“Most football players who dislocate their shoulder for the first time can usually return to play within six weeks of the injury once they reestablish full range of shoulder motion and strength,” according to Washington University physicians. “They must be able to perform all of the actions necessitated by their position prior to return to play.”

The Texans open their season in four weeks against the Jacksonville Jaguars.

Arizona Cardinals running back Jonathan Ward appeared to avoid significant injury when he hurt his ankle Friday [August 13] against the Cowboys. We’re told the injury is not too serious, and Ward should be good for Week 1 against the Tennessee Titans.

Meanwhile, we hear Cardinals safety Chris Banjo will miss a couple of weeks with a hamstring injury suffered Friday night. The organization is optimistic he will be available for the opener.

The NFL’s push to limit head injuries has had some success. Consequently, concussions will always be a reality in the NFL.