NFL Power Rankings Week 2: Try not to overreact to one game

Our NFL power rankings are back for Week 2, and we try our best not to overreact to the first week's slate of games. How'd your team fare?

Which teams slide into the top 10 as the favorites to make the 2021 NFL Playoffs? 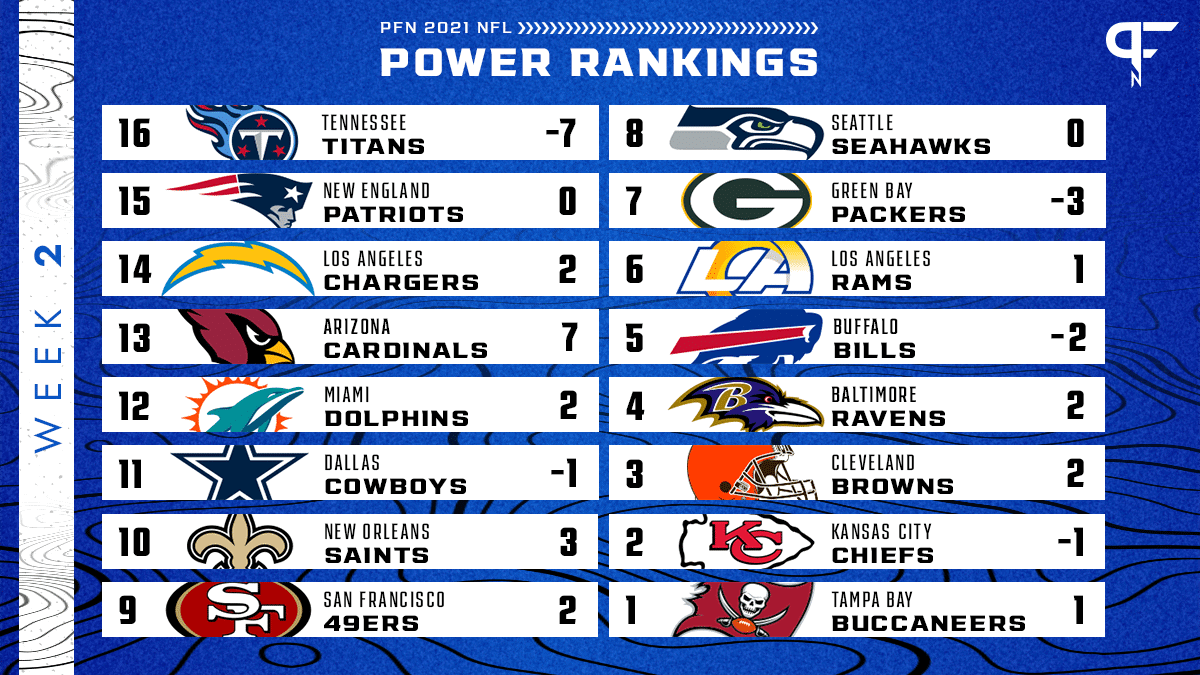 It’s never good to overreact to Week 1 games or any one-game sample, but man, Jameis Winston looked good against what should be one of the best teams in the NFC. He only threw the ball 20 times, but he completed 14 of them and threw 5 touchdowns. New Orleans’ defense made the reigning league MVP look over the hill. They face the Panthers in a divisional matchup in Week 2, and they jump a few spots here in the NFL power rankings after their massive win.

Their game against the Detroit Lions went exactly how we all expected it to, until about four minutes left in the fourth quarter. They completely dominated the game until the end. Then, the wheels almost came completely off. The offense gained nearly 8 yards per play, with Jimmy Garoppolo averaging 12.6 yards per attempt.

Russell Wilson was unbelievable, going 18/23 for 254 yards and 4 touchdowns. Tyler Lockett scored twice and had 100 receiving yards on the day, which included an incredible football tracking over his head. They also had their way with the Colts’ defense on the ground. The Seahawks rushed for 140 yards on 27 carries and controlled the game from the second quarter on.

R-E-L-A-X. The Packers will be fine. Aaron Rodgers will get it going, and this team will get back on track. That is unless all of the offseason petty and traveling actually did free Rodgers up in a negative way. See, I expected his happiness to drive him to greatness. Maybe this offseason he relaxed too much? Still, we won’t sound the alarm yet.

Losing all of your team’s running backs just before the start of the regular season is not good. Losing one of the best cornerbacks in the NFL to a knee injury won’t help, either. Still, the Ravens are one of the best organizations in football. They remain high in the NFL power rankings because Lamar Jackson helps that rushing attack go, no matter who is his partner in the backfield.

Baltimore played a weird game against the Las Vegas Raiders. Nothing particularly funky happened, but it felt … off. It seemed like the Ravens should have been up the entire game, given how poor Derek Carr looked early on. But they never distanced themselves from the Raiders and let Carr torch them late to tie it up. In overtime, Carr and Bryan Edwards took over for the upset.

The Rams have a ton of offensive firepower, and in the offseason, they upgraded their quarterback. They could cement themselves as one of the top teams in the league if they can string together a few big wins early in the season.

Los Angeles struggled a bit with Chicago’s rushing attack in Week 1, but they looked good otherwise. Matthew Stafford was efficient in his first start with the team, and the offense was explosive. With the 49ers and Seahawks close by, the Rams must continue to play strong football on both sides of the ball to win the best division in football.

No part of the Bills’ loss to the Pittsburgh Steelers makes sense with a quick glance of the box score. However, their high-powered passing attack didn’t show up, which kept the game too close for too long. The defense held the Steelers to 37 yards of offense in the first half but faltered in the second, allowing 16 points.

The Steelers blocked a Bills punt and returned it for a touchdown. Buffalo needs to bounce back next week, or they’ll find themselves tumbling down the NFL power rankings even more.

Sure, they lost against the Kansas City Chiefs, but they played incredibly well to begin that football game. Furthermore, they easily could have won that game. It looked like a battle of the Titans, but not the bad ones in Tennessee. Baker Mayfield played well but threw the ball away on their final possession as he attempted some late-game heroics.

Patrick Mahomes. That guy is really good. Despite being down 22-10 at the half, the game never felt anywhere close to out of reach. Their defense is still a work in progress, but Kansas City has an offense stellar enough to carry the team into the playoffs. The Browns were always going to be one of their most formidable opponents. If they beat Baltimore next week, it’s tough to look at the schedule and imagine many losses.

Despite playing a sloppy game, including 4 turnovers, the offense had its way with the Cowboys’ defense. Tampa Bay lost Sean Murphy-Bunting to a dislocated elbow, but they have more than enough bodies to absorb that blow. This is as complete a team as you’ll find, so they get the bump up to the top spot in the NFL power rankings. Once the Buccaneers clean up some of their mental mistakes, they’ll be an incredibly tough team to beat.