NFL Power Rankings Week 2: Try not to overreact to one game

Our NFL power rankings are back for Week 2, and we try our best not to overreact to the first week's slate of games. How'd your team fare?

NFL power rankings are back heading into Week 2, but we are trying very hard not to overreact about what we saw during the Week 1 slate of games. Some teams made more significant jumps than others, and some rose even in defeat. Only a few matchups caught us by surprise in Week 1.

We had some big movers after the first slate of games in the NFL’s opening week. 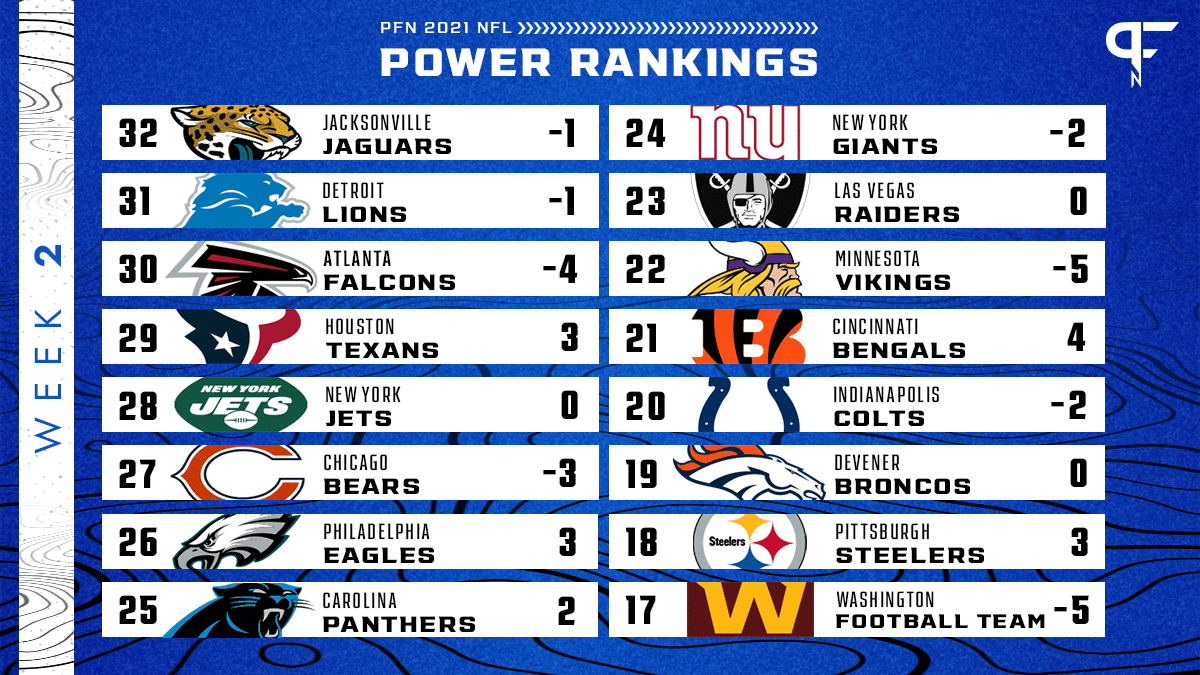 This one is pretty simple. We thought the Jaguars and Texans was a battle of the basement dwellers, but we thought Houston had to be worse. That ended up being very, very wrong. The 37-21 final score was far closer than the game ever felt. It appeared the Texans had the upper hand from the jump.

The Jaguars have a rookie quarterback and a rookie head coach, and it seems both have some growing pains to go through together. Today was Trevor Lawrence’s first-ever regular-season loss.

At the end of the game, the Lions showed a ton of fight against the 49ers, which is a good sign going forward. However, they simply don’t have the roster to compete right now, and cornerback Jeff Okudah is now out for the foreseeable future with an Achilles injury. They face the Packers in Week 2, who will surely be in a bad mood after getting crushed by the Saints in Week 1.

This was one of the more surprising outcomes of the early games. The Falcons looked lifeless against Jalen Hurts’ Eagles. Atlanta could only muster 6 points against the Eagles, and it was a concerning offensive outing. They gained just 260 yards, averaging 4.1 yards per play. It doesn’t get any easier for them, either. They face the Tampa Bay Buccaneers in Week 2.

Tyrod Taylor played well against the Jaguars, and Brandin Cooks received 5 passes for 132 yards. They’re low in the power rankings because no matter how good they looked against the Jaguars, we assume Jacksonville is currently the worst team in the league. The Texans travel to Cleveland for Week 2.

Zach Wilson looked like a rookie quarterback in Week 1. He made some nice plays, but he was also sacked 6 times for 51 yards. The offensive line struggled, and they lost Mekhi Becton, which doesn’t give us much hope for improvement. New York only rushed the ball 17 times for 45 yards, which certainly won’t help their signal-caller in Year 1. The offense must carry this team because the defense doesn’t have enough talent to succeed.

Andy Dalton and Chicago’s offense will struggle. Their offensive line is a mess, and Dalton is not mobile enough to survive. Matt Nagy must cultivate an environment for him to succeed. Furthermore, the Bears need to keep games close early, or else Dalton will be teed off on. We are all awaiting the arrival of Justin Fields.

Dalton and the Bears lost to the Rams 34-14. Dalton played fine from a completing passes standpoint, but he averaged just 5.4 yards per attempt and his longest completion was just 19 yards. Fields threw 2 passes and completed both, but his rushing touchdown is what got everyone excited. Nagy is going to keep hearing he’s wrong about starting Dalton. He needs to pull the ripcord, or the front office might pull his.

The Eagles dominated the Falcons in Week 1, leading to a rise in the NFL power rankings heading into Week 2. Jalen Hurts was practically flawless, going 27/35 for 264 yards and 3 touchdowns. He also rushed the ball 7 times for 62 yards. They’ll have a massive test in Week 2 when they face the San Francisco 49ers.

Sam Darnold looked good in his revenge game against his former team. He went 24/35 for 279 yards and a touchdown. The young Carolina defense dominated the Jets’ offense today. They allowed just 252 total yards and held the Jets to 14 points. The Panthers challenge the New Orleans Saints in Week 2, which could spell trouble, as the Saints molly whopped the Green Bay Packers in Week 1.

They are who we thought they were. Jason Garrett is a struggling offensive coordinator. And Daniel Jones is quickly going to have to start carrying a bad offensive game plan, or he’ll be looking to take the Sam Darnold route here soon. Jones actually had a relatively decent day, considering he was up against Denver’s defense. However, he’ll need to do a lot more in the air if this team wants to survive.

During Week 2’s Thursday Night Football game, the Giants offense played well against a presumedly good Washington Football Team defense. The offensive line played surprisingly well, at least in terms of protecting Daniel Jones. Jones played well also, showing his athleticism multiple times on scrambles. But the Giants made crucial mistakes when it mattered most, including a penalty that voided what would have been the game-winning miss.

The Vikings are one of the biggest losers from Week 1. They fall in the power rankings after losing to a Cincinnati Bengals team that we didn’t expect much from coming into the season.

Minnesota struggled to run the ball against the Bengals, who shouldn’t be good against the run when you look at their roster. They played sloppy, too. The Vikings were penalized 12 times for 116 yards in the game.

Joe Burrow looked comfortable in his 2021 debut against the Minnesota Vikings. He completed 20 of his 27 passes for 261 yards. He also threw 2 touchdowns, with one of them going to his college teammate, Ja’Marr Chase. Chase generated 101 yards on 5 catches in his NFL debut, silencing some doubters along the way.

Yet, Burrow was sacked 5 times, which is a scary sight for Bengals fans who lost him for the season in 2020 due to a knee injury.

The Colts dominated the Seahawks in plays ran and time of possession. Nevertheless, they could only produce 16 points against what on paper does not look like a great Seahawks defense. Carson Wentz looked serviceable, which we couldn’t say last season when he lost the Eagles’ starting job to Jalen Hurts. The Colts’ defense struggled, allowing 7.2 yards per play against the Seahawks.

The Denver Broncos were always some good quarterback play away from being one of the better teams in the AFC. They have players at all three levels of the defense, and they possess a solid OL and plenty of weapons in the passing attack. Bridgewater looked stout against the Giants, completing nearly 78% of his passes against what was supposed to be an excellent defense. Denver should start the season 2-0 as they face the lifeless Jaguars in Week 2.

Derek Carr had arguably his best season as a pro in 2020. The Raiders lost a few important pieces on the offensive line, but the offense could still be good enough to contend. I’ll wave the Henry Ruggs flag until they legally force me to retire it. Bryan Edwards was one of “my guys” coming out of South Carolina, too. Alongside Darren Waller, this offense looks exciting. And, for all his flaws, if Jon Gruden can do one thing, it’s call plays with the best of them.

The Raiders appeared to play poorly, yet they stuck with Baltimore deep into the fourth quarter and tied it at the very end. Carr played incredibly well late, leading the team to a surprise upset win against the Ravens.

The Steelers still have a lot of issues. Their offensive line is not good. Najee Harris didn’t have an inch of running room for the entire game. If it weren’t for a 25-yard scamper from Chase Claypool, the Steelers would have only rushed for 50 yards in the game. But they also just beat one of the best teams in the NFL from a season ago and made a perceived MVP candidate appear average. Pittsburgh’s pass rush might be enough to elevate this team in 2021.

The raw stats from their offense don’t look good, but Washington and the Chargers averaged 5.3 and 5.4 yards per play, respectively. The Chargers dominated time of possession and ran 29 more plays than Washington. The Football Team simply ran into a talented roster that had a better day than them. Missing Ryan Fitzpatrick for any significant time will be tough to overcome.

Well, what a way to save from getting to 1-1. The defense struggled with Daniel Jones and Sterling Shepard. Washington beat the Giants, but that didn’t necessarily make me feel better about this team. The offense looked surprisingly good, and Terry McLaurin is an absolute gem.

Hopefully, the loss of Arthur Smith wasn’t too much for the Titans to overcome in 2021, but they looked putrid against the Cardinals. They struggled to gain ground running the ball, and Tannehill couldn’t slide away from Chandler Jones all day. Their secondary is a massive work in progress, so if the offense doesn’t find a remedy against the Seahawks, they’ll start the season 0-2 and slide farther down our NFL power rankings.

Mac Jones made his NFL debut against his former college teammate and went toe to toe with an impressive Miami Dolphins defense. He completed 29 of his 39 passes for 281 yards, displaying outstanding efficiency for his first-ever start. New England’s defense stepped up, holding the Dolphins to just 17 points. However, they must convert on more drives and not settle for field goals.

Justin Herbert looked as advertised in Week 1, even against one of the most well-respected defensive units in the NFL. They struggled to run the football, averaging just 3.1 yards per carry. Regardless, Washington has an incredibly talented defensive roster.

Los Angeles faces the Cowboys next week, so both their passing and rushing attacks should have better days.

We knew Tennessee’s secondary might struggle a little in 2021, but we didn’t think they’d put up zero fight against Arizona’s passing attack. Kyler Murray passed for 289 yards, going 21/32 with 4 touchdowns and 1 interception. The Cardinals averaged 6.2 yards per play against the Titans and sacked Ryan Tannehill 6 times. DeAndre Hopkins saw our wide receiver rankings and made sure to make multiple big plays.

This felt like a divisional throwdown. Both offenses played about the same level from an efficiency standpoint. The Patriots dominated the time of possession and ran 18 more plays. Nonetheless, it was an evenly fought contest overall. It makes sense, given we’ve had them close on preseason power rankings. Miami needs to find some explosion offensively if they want to contend in the AFC, though.

Dallas’ defense struggled mightily against the Tampa Bay Buccaneers, but the offense was everything it was billed to be. They could not run against the Bucs, but that was always going to be difficult when they lost OG Zack Martin for the game. It didn’t help that Tampa Bay was the best run defense in the league in 2020, and Vita Vea was on a tear. Dallas has a tough matchup against the Chargers in Week 2.