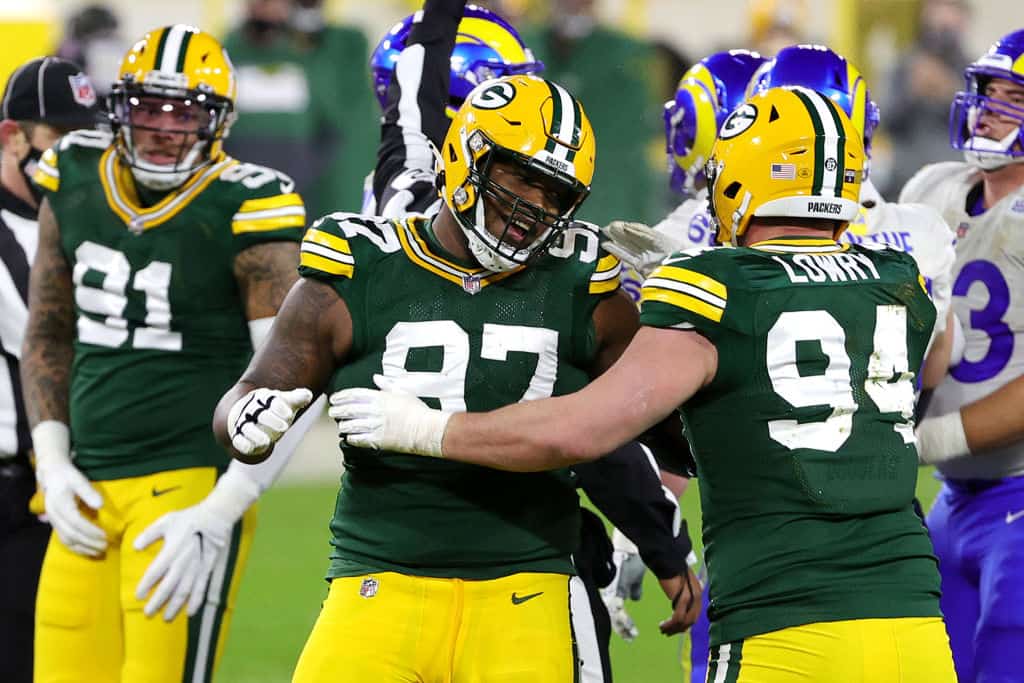 GREEN BAY, WISCONSIN - JANUARY 16: Kenny Clark #97 of the Green Bay Packers celebrates sacking Jared Goff #16 of the Los Angeles Rams (not pictured) in the fourth quarter during the NFC Divisional Playoff game at Lambeau Field on January 16, 2021 in Green Bay, Wisconsin. (Photo by Stacy Revere/Getty Images)
What's in this article? Click to show
What are the playoff results from Divisional Round Weekend?
Which teams are playing in the Conference Championship games?
Teams eliminated from the 2020-2021 NFL Playoffs

With the results from the Divisional Round now official, we can start to turn our attention towards previewing the Conference Championship games. Last weekend saw eight teams cut to four, but who will be the final two teams in the 2020-2021 NFL Playoffs?

What are the playoff results from Divisional Round Weekend?

In the first of our Division Round results from the 2020-2021 NFL Playoffs, the Green Bay Packers took care of business with a victory over the Los Angeles Rams. The Packers came out strong, leading 19-10 at halftime. They extended that lead to 15 points early in the third quarter. The Rams had a chance to tie it up in the fourth quarter. However, a 58-yard touchdown from Rodgers to Allen Lazard gave the Packers a 14-point lead that the Rams could not recover from.

Aaron Rodgers continued to show his regular season MVP form. He threw for 296 yards and made some impressive throws under pressure. He also added a rushing touchdown on a 10-yard scramble in the first half. However, the star of the show for the Packers was the run game. Between Aaron Jons, A.J. Dillon, and Jamaal Williams, they carried the ball 32 times for 191 yards.

The Rams got a spirited performance from Cam Akers, who had 90 rushing yards on 18 carries. However, they could not add another surprise result from the 2020-2021 NFL Playoffs by overcoming the odds and defeating the Packers at Lambeau Field.

In what was a surprisingly low scoring affair, the Buffalo Bills defeated the Baltimore Ravens in their Divisional Round matchup. The weather in Buffalo made it next to impossible to kick field goals or throw the ball downfield.

However, Josh Allen and Stefon Diggs were able to do enough to get the win. With Lamar Jackson missing the fourth quarter because of him being in the concussion protocol, the Bills kept it conservative with quick passes and enough rushes to keep the clock running. Diggs finished with 106 yards and a touchdown, while Josh Allen threw for over 200 yards.

After a strong start, the Kansas City Chiefs appeared to be in control of this NFL matchup — it looked like the playoff result most expected. They led 19-3 at halftime after a Rashard Higgins fumble went out of the end zone, costing the Browns a shot at seven points. The game looked to be out of reach when Baker Mayfield was intercepted to start the second half. However, Harrison Butker missed the field goal and the Browns managed to get back to 19-10.

The turning point of the game came when Patrick Mahomes was helped off the field. Mahomes was evaluated for a concussion before being ruled out in the fourth quarter. However, the Browns could not take advantage of a Chad Henne interception. The game came down to a 13-yard scramble from Henne, followed by a conversion on fourth and 1. Tyreek Hill finished with 110 yards receiving, with Travis Kelce adding 109 yards and a touchdown.

There is a cliche in football that says that it is very difficult to beat the same team three times in one season. Well, that cliche proved to be true when the Tampa Bay Buccaneers defeated the New Orleans Saints in the Superdome. Unlike the two previous matchups this season, Tom Brady did just enough to outlast Drew Brees and the Saints.

The real stars of this game were those on the Tampa Bay defense. The Buccaneers were able to force Drew Brees into throwing three interceptions, the first time he had done so since 2017. Tampa then relied on a heavy dose of the run game to milk the clock. Now, Brady will need to head on the road to take on the Green Bay Packers at Lambeau Field.

Which teams are playing in the Conference Championship games?

In this article:Featured, NFL Playoffs