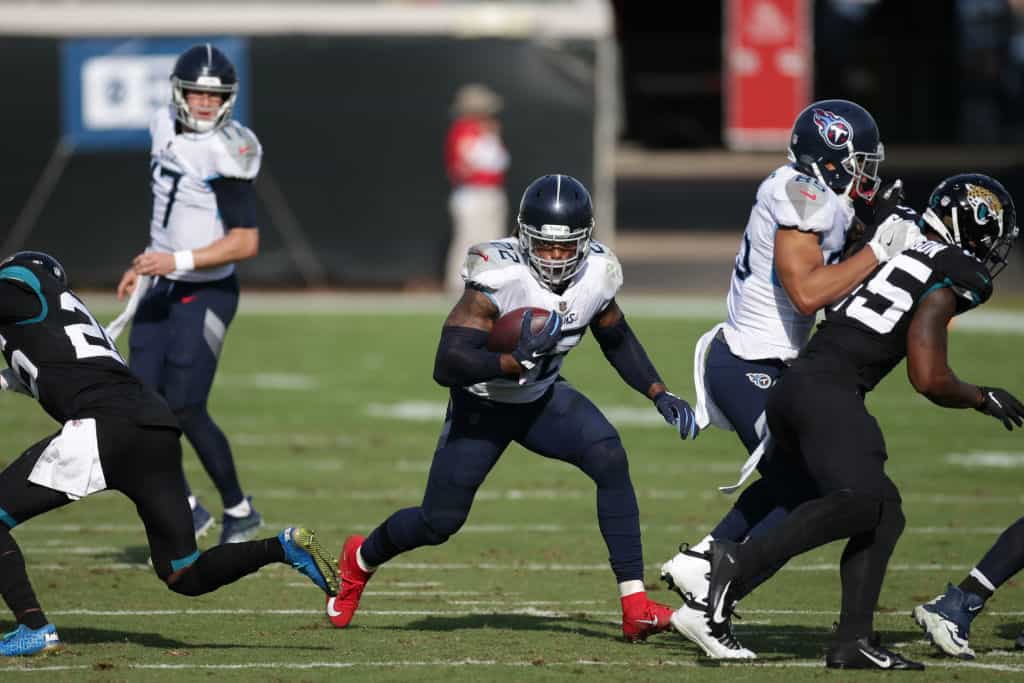 JACKSONVILLE, FL - DECEMBER 13: Tennessee Titans Running Back Derrick Henry (22) runs with the ball during the game between the Tennessee Titans and the Jacksonville Jaguars on December 13, 2020 at TIAA Bank Field in Jacksonville, Fl. (Photo by David Rosenblum/Icon Sportswire via Getty Images)
What's in this article? Click to show
Which RBs can be valuable in the Week 15 Rush Hour player props contest?
Which NFL players should I target in the Week 15 Fantasy Challenge?
Who are some options in the Week 15 Touchdown Dance contest?
Want more fantasy football analysis and news?

Picking player props are becoming more and more popular for NFL fans, and Monkey Knife Fight takes that one step further. Their innovative format allows you to get creative selecting NFL player props, as we will examine in our Week 15 selections for the Sunday, December 20th, 2020, early slate. If you have never played on Monkey Knife Fight, then be sure to check out their site using our promo code PFN and get a 100% instant match bonus up to $50.

Which RBs can be valuable in the Week 15 Rush Hour player props contest?

While there are several great individual matchups this week, finding games with two great matchups aren’t the easiest thing to do this week. However, that doesn’t mean there are no potentially profitable Rush Hour contests for Week 15, even if that means getting a bit creative.

Not all things in life need to be complicated in life. 2020 is hard enough. So how about a gift-wrapped win for the holidays? In Week 15, the NFL’s rushing leader gets the best matchup possible literally.

Additionally, they have allowed a league-high 23 touchdowns to running backs. Henry is coming off a 222 total yards game in Week 14, which was the sixth time since 2019 that he has eclipsed 150 yards or more in the regular season.

On the other side, it doesn’t hurt that rookie D’Andre Swift is a plus matchup. While he is in a slight timeshare with RB Adrian Peterson, Swift out-snapped him 36 to 16 last week. The team also was easy on him after he missed a few games, so I expect a full workload.

To hit our goal in this NFL prop, we need our picks to have more than 178.5 rushing yards if you choose the lowest prize of 2x. Anytime I can get Derrick Henry in a rushing prop on Monkey Knife fight, it is always one of my favorite NFL player props, which remains true for Week 15.

When looking at matchups to target for Rush Hour contests, I am looking for a stable floor first and then considering game script and opponent. With Jacksonville Jaguars RB James Robinson, he checks all the boxes. The UDFA is locked into a floor of 18 touches each week and has no competition for touches. Check.

In Week 15, he gets a Ravens defense that is not one we have to avoid for fantasy. They are hovering around league average in yards per carry (4.36), yards per target (5.44), and total touchdowns (11). They have faced 26.4 RB touches per game, and of the 10 that have seen 13 or more carries, nine have at least 81 total yards. Check.

Then we have the other rookie in this matchup in J.K. Dobbins. The lone downside is that he is in a timeshare, but he has the most upside of all the rushers. Not to mention, this matchup is almost as good as it gets. They are one of only five teams to allow 28-plus PPR points per game to RBs. The 25.8 carries per game are the second-most. This is big because it means that there is still volume to be found even though it’s a timeshare.

The Jaguars have allowed five different RBs to top 115 yards on the ground, including two over 150-plus yards. 157.5 rushing yards is the number to beat, and I think both James Robinson and J.K. Dobbins can bring a solid return on the deposit placed using the Monkey Knife Fight promo code PFN. I love this NFL player prop for Week 15.

No one said we couldn’t use a quarterback in this contest, did they?

I said we could get creative, and that’s what we will do with this one. Instead of doing a single game, we will use the Star Shootout to our advantage on Monkey Knife Fight. In this, we have access to the entire 1:00 PM slate of games.

Derrick Henry is locked, and for all the reasons we talked about earlier. In the second spot, how about the RB1 over the last three weeks? This running back has finished with 114, 135, and 165 total yards over the last three games. He also gets a team that sees 25.6 carries per game and allows a league-leading 5.38 yards per carry. Additionally, they allow a ridiculous 183.3 total yards per game to running backs.

Did you figure it out yet? It’s Indianapolis Colts RB Jonathan Taylor who gets the Houston Texans once again.

For the third option, let’s go back to Baltimore, but how about Lamar Jackson. The 2019 NFL MVP looks like his former self and not some number two version. See what I did there? In his last two games, Jackson has 94 and 124 yards on the ground. Everything we said about the game for Dobbins applies here.

Using our Monkey Knife Fight promo code PFN, you can play this contest and would only need more than 308.5 yards on the ground combined. NFL player prop picks like this is what makes using this site so much fun, especially if your fantasy team isn’t playing in Week 15.

Which NFL players should I target in the Week 15 Fantasy Challenge?

For those of us who play fantasy football, this might be the most fun. It’s what we know and love, and one of the reasons I was so excited to use Monkey Knife Fight promo code PFN and get started with a few more rubles in the account than I otherwise would.

Did I mention yet that I like the Titans and Lions game?

I have already talked ad nauseam about my thoughts on Derrick Henry and D’Andre Swift. In the Fantasy Challenge, we get to take advantage of their full skill sets. The other player I am going to add to this duo is Titans WR A.J. Brown.

Brown is coming off a Week 14 performance where he caught seven passes for 112 yards and a touchdown. Not only are the Lions bad against the run, but the Lions have also allowed the fourth-most fantasy points per game (42.0) to wide receivers. Also, both Desmond Trufant and Jeff Okudah are on injured reserve. Fire Brown up as a WR1 this week and expect big things from the Ole Miss product.

For this NFL prop in Week 15 on Monkey Knife Fight, I believe the combination of picks between Henry, Swift, and Brown should easily clear the 60.5 PPR points we need for the 2x prize. Only play this contest after using Monkey Knife Fight promo code PFN — it could make for a quite profitable week!

Who are some options in the Week 15 Touchdown Dance contest?

If you want a simple contest to enter when you redeem your Monkey Knife Fight promo code PFN, then this is the one for you. If you can identify three players who can combine for three or more touchdowns, you have a chance to win money. You will not find a much simpler process for NFL player prop picks in Week 15.

It’s hard not to pack this with running backs. Options like Derrick Henry, Dalvin Cook, James Robinson, and Jonathan Taylor all seem like surefire options that will land in the end zone at least once, maybe more. Combined, those four backs have accounted for 45 touchdowns on the season.

Playing this in the Star Shootout category, you can fit three of them into your lineups. Hitting the 1.5x prize of 2.5 touchdowns should be reasonably simple. If they can manage four scores, we are rolling in rewards thanks to a 4x return. Just for ease of picks, this is my favorite NFL player prop for Week 15.

If there is one play I am all over, it’s the Touchdown Dance between the New Orleans Saints hosting the Kansas City Chiefs.

If you have not made an account and took advantage of promo code PFN on Monkey Knife Fight, this is the one you need to do it on as it’s a virtual lock.

Drew Brees is back under center, and we know that means for the Saints offense, especially Alvin Kamara. Throw in the news that Michael Thomas is now in the IR, and Kamara is the RB1 for Week 15. He is locked into nearly every NFL player prop I can get him in. Alongside Kamara, is there any easier pick than Travis Kelce and Tyreek Hill?

For this NFL prop in Week 15 on Monkey Knife Fight, the combination of Kamara, Hill, and Kelce should easily clear the 2.5 touchdowns we need for the 2x prize. If you want to go higher, the 3.5 TD goal will bring a 4x prize. The ability to choose your goal is part of the beauty of Monkey Knife Fight. Only play this contest after using Monkey Knife Fight promo code PFN — it could make for a quite profitable week! You can’t find another DFS site that allows you to find matchups like this.