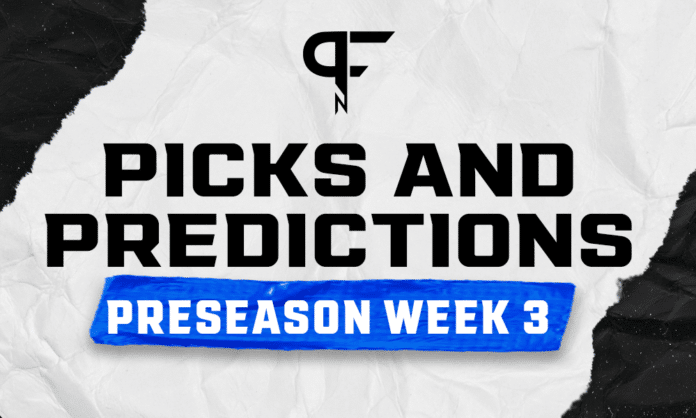 Free Week 3 NFL preseason picks and predictions against the spread

Check out PFN's free NFL picks and predictions against the spread for Week 3 of the preseason before placing your football bets this weekend.

With almost all major battles decided, figuring out which players will receive the most playing time is the biggest hurdle when determining picks and predictions against the spread. We pulled all this week’s odds from Sports Betting Dime.

Week 3 of the preseason has become one of the more difficult weeks to handicap with the extended regular season. Most positional battles have already been determined, and thus, fringe players and backups will spend most of the time on the field. Deciphering which players will play — and what strategies coaches will reveal– creates an unusual layer of information that needs to be considered.

Here are the preseason Week 3 betting lines and NFL odds for Friday’s games as of 7:15 PM ET on August 25.

Depth is typically my biggest deciding factor in determining preseason betting, especially at the quarterback position. The Colts field a superior depth at the QB position with Jacob Eason and Sam Ehlinger as the main backups compared to the Lions with Tim Boyle and David Blough.

As with most NFL preseason games, I expect this to be another low-scoring game that may come down to the final five to six minutes of the game. The Colts have more depth across the board, and I will back them to cover the spread.

The Eagles have looked lackluster. However, the final week of the preseason presents a different situation entirely. Philadelphia has more depth across the board with Joe Flacco and Nick Mullens (considering Jalen Hurts likely sits) and should finish the preseason with one victory. The Jets are the perfect opponent to do it against.

I doubt Zach Wilson plays much for New York. Looking at their overall depth, the Jets should lose this one outright as favorites. I will settle for the points with the Eagles and take +4 for this free NFL pick.

The Steelers’ quarterback combo of Mason Rudolph and Dwayne Haskins has extensive starting experience in the NFL and plenty to prove. They go up against P.J. Walker and Will Grier. This is another game where I like the underdog — the Steelers win outright and control this game from start to finish.

Regardless of the starters or backups available across the board, this is a strictly coaching viewpoint. Andy Reid is an offensive guru who can game plan for any player on the field. If Chad Henne plays a portion of the game, add that NFL starting experience to the reasoning behind backing the Chiefs.

Here are the NFL preseason Week 3 betting lines and odds for Saturday’s games as of 7:15 PM ET on August 25.

Seeing a spread of +8 in a preseason game with little insight on playing time and rotations seems absurd. That being said, the Packers are a top-heavy team in regards to talent, and the Bills have great depth across the board. The potential lack of Jordan Love for an additional preseason game has me leaning to the Bills here.

You must garner the courage of a warrior to go against John Harbaugh and the Ravens during the preseason, yet here we are. Taylor Heinicke and Kyle Allen versus Trace McSorley and Tyler Huntley? I’ll take my chances here with the Football Team and the points. However, if the Ravens continue their preseason dominance, at least I can rely on a field goal loss and still cover the spread.

Give me all the Justin Fields shares possible. He is the perfect band-aid for the poor Matt Nagy play-calling skill set, and he has turned trash into gold so far this preseason. Tennessee will likely rest all their starters, and the combo of Logan Woodside and Matt Barkley does nothing for me. The Bears should cover a field goal with ease against this Tennessee defense.

We’re still in the midst of the Jameis Winston and Taysom Hill battle, and that works in our favor for betting in the preseason. I expect a healthy battle to decide the Week 1 starting quarterback gig. After they leave the game, Trevor Siemian should come in against the third-string defense of the Cardinals. The -3.5 line isn’t ideal, but I think it’s indicative of what to expect in this game — I’ll back the Saints.

The Texans are 2-0 this preseason while beating up on teams like the Packers (who the Jets also beat) and the Cowboys (0-3 in the preseason). The Buccaneers are 0-2 in the preseason while highlighting a different quarterback in each of their two losses. The Buccaneers’ depth and talent are light years ahead of the Texans, and I think both teams move back into their expected ranges in this final preseason game. Give me the Buccaneers’ positive regression and the Texans settling back into their expected losing role.

We have another big point spread, and once again, the favorite is rightfully favored by the amount. With Teddy Bridgewater’s starting position locked in for the Broncos for Week 1, we have a few potential scenarios for this game.

Drew Lock could be shelved as a safety measure if anything were to happen to Bridgewater, or he could be showcased for the first half of the game to build his trade value. Either way, I feel comfortable backing Brett Rypien more so than the combo of John Wolford and Bryce Perkins. Take the Broncos to cover the spread.

Seattle’s backups have shown zero reason to back them as -5.5 favorites this preseason. Meanwhile, Chase Daniel and Easton Stick have been more than serviceable. I’m expecting a low-scoring game here, and given a decent 5.5 spread, I’m inclined to take the underdog Chargers here for this free NFL pick.

Here are the NFL preseason Week 3 betting lines and odds for Sunday’s games as of 7:15 PM ET on August 25.

Two disappointing preseason teams do battle. The Jaguars have a porous offensive line and will be without Trevor Lawrence now that he was named the starter. I expect the Cowboys to perform better than their last two preseason games and are getting more than a field goal at home. I’ll gladly take that in a free NFL pick for an unpredictable preseason game.

The Dolphins look like a team with something to prove. Even with Tua Tagovailoa sitting the final preseason game, Miami has enough depth across the board to keep up with Joe Burrow and the Bengals. Jacoby Brissett and the offensive depth are there while the defense will be stronger than Cincinnati’s.

Jimmy Garoppolo and Trey Lance are still battling it out for the starting quarterback position. Therefore, they should both see plenty of playing time. Derek Carr is unlikely to play, and backup Marcus Mariota is still dealing with a quadriceps injury. This leaves the Raiders with interception machine Nathan Peterman as the main quarterback available. I’ll take the better depth, better quarterbacks, and better defense here with the 49ers.

As expected, Bill Belichick is waiting until the final possible moment to announce his starting quarterback. With Cam Newton back in the fold for this game after his five-day absence, I expect both quarterbacks to have plenty of time to make their case for why they deserve to be the starter. Mike Glennon is my other choice. Give me the Patriots.

Case Keenum is a serviceable quarterback with starting experience, while the Falcons will field either unknown Feleipe Franks or the newly signed Josh Rosen. Furthermore, the Browns have much better depth than the Falcons, making this free NFL pick an easy one.