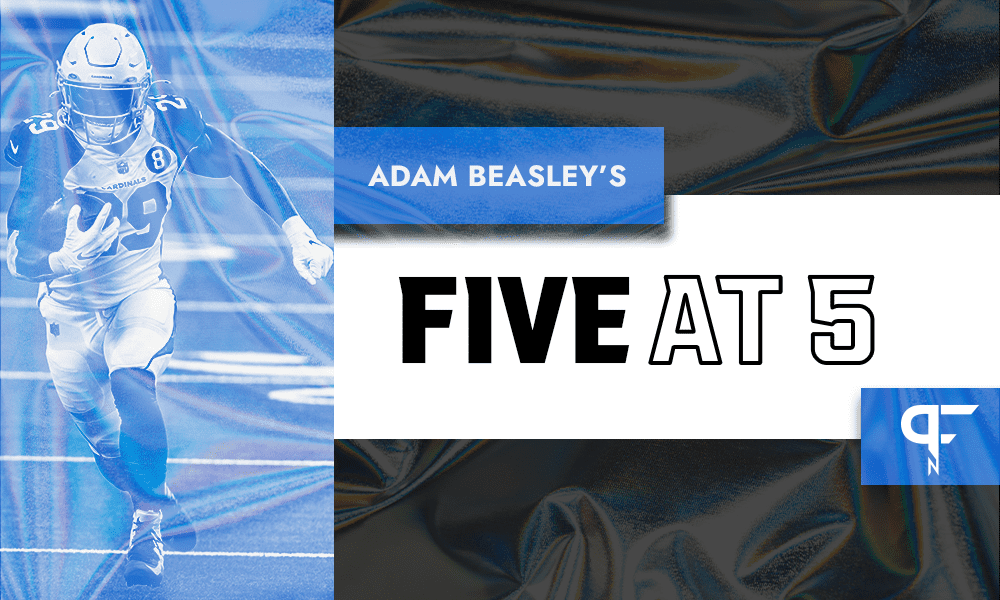 As the NFL‘s dead period rolls on, there are still some NFL news and rumors if you look hard enough. In the debut edition of the Five at 5, we explore a name in the trenches to watch in Atlanta, the NFL’s return to normalcy, and a remarkable streak that’s extending. But we kick things off with an early look at the Arizona Cardinals’ plans at running back.

NFL News and Rumors: Running back by committee or Edmonds’ job to lose in Arizona?

When new Cardinals running back James Conner revealed in April that he needed offseason surgery to fix a toe he injured in an ATV accident, there was a sense of “here we go again.”

Conner was productive in his four years as a Steeler — when healthy. That is an important caveat, considering he missed time due to a string of injuries, including to his quad and shoulder. Conner hasn’t played a full 16 once in his career. And a source tells PFN that he still seemed a bit banged up during spring ball with the Cardinals.

But don’t fret, Arizona fans. He probably was never the team’s RB1 plan anyway. First, there’s the matter of his contract; Conner is making just $1.8 million on a one-year, prove-it deal.

But the more important context — the Cardinals seemingly think Chase Edmonds is better.

A source tells us that the Cardinals’ training camp battle at running back might be a battle in name only. Rather, Edmonds is the favorite to be the team’s featured back after splitting time with Kenyan Drake in 2020.

Edmonds averaged a robust 4.6 yards per carry and caught 53 passes in 2020, both tops among Arizona running backs. Some believe he might even top 1,200 yards from scrimmage in 2021, the final year of his rookie contract.

The Cardinals telegraphed their faith this offseason in Edmonds, a Fordham product taken in the fourth round in 2018, by declining to take a running back in the 2021 NFL Draft.

The Atlanta Falcons are in the weird, in-between zone. They’re probably not competing for a title, but — despite entering the offseason some $36 million over the cap — they’re also not tanking.

They traded Julio Jones but passed on a quarterback at No. 4 and decided to roll with Matt Ryan for a 14th season.

To overachieve in a cash-strapped season, they need to hit on a few long shots.

There’s no better example of this dynamic than the team’s one-year signing of Josh Andrews, a fresher-than-his-age 30-year-old interior lineman who might just end up the Falcons’ starting left guard with the offseason release of James Carpenter. Andrews has four starts in 40 career appearances for the Eagles, Colts, and Jets, but chose Atlanta — which gave him $338,000 guaranteed — because he believed the organization gave him the best chance to play.

That gamble might already be paying off. Andrews got starter’s reps in the spring, a source tells PFN, and will be given a chance to win the left guard job in training camp. With Matt Gono out indefinitely with an undisclosed injury, Andrews’ biggest competition appears to be rookie Jalen Mayfield, a third-round pick out of UCLA.

Andrews’ career development has been stunted by injuries, but the talent is there. We hear the Jets made a play to keep him, but he ultimately decided Atlanta was the best fit. If he pops, the Falcons could have a sneaky solid offensive line, even with the departure of Carpenter and Alex Mack. Look for Matt Hennessy to be given every opportunity to replace Mack at center.

The clearest sign yet that the NFL wants to put the pandemic behind it: the Miami Dolphins announced Wednesday that they’re allowing fans to attend a full schedule of training camp practices — 14 in all — beginning July 31.

This, of course, is a huge improvement over 2020, when every practice was closed, and game-day attendance at Hard Rock Stadium was just a fraction of capacity.

The Bears also are inviting fans to 14 open sessions. Yet, other teams have only announced a smaller number of practices available to fans (or they are not yet ready to announce their full plans).

Training camp will be Dolphins fans’ first opportunity to see the organization’s new $135 million training complex in Miami Gardens, a 227,000-square foot complex that will include a hydrotherapy area, a fuel bar and a recovery area including cryotherapy and isolation tanks

If this were 2009, New York Jets fans would probably be losing their minds that Zach Wilson, the draft’s No. 2 pick, remains unsigned.

And yet, three weeks shy of training camp, there’s no all-consuming New York angst that their next great hope at quarterback is one of six first-round picks not under contract.

That’s because camp holdouts don’t really happen anymore. The most memorable recent one was Joey Bosa, and that was five years ago. Offset language — which would save the club that drafts a player money if they cut him and he re-signs somewhere else — is often the biggest point of contention.

Still, it’s a bit surprising that Wilson and Trey Lance, who went one pick after Wilson, have yet to sign. Trevor Lawrence set the market by agreeing recently to a four-year, $36.8 million deal. And Kyle Pitts, the fourth pick, is under contract too. The other first-round QBs, Justin Fields and Mac Jones, have also put pen to paper.

It’s only a matter of time until Wilson and Lance do the same. The Jets and 49ers made a huge commitment to them by selecting each in the first round. It’s hard to fathom they would want to do anything to impede their development like spurring a holdout that results in missed practices.

The Witching Hour has gone on for 12 years — and isn’t ending any time soon.

Front Office Sports is reporting that Scott Hanson has signed an extension to remain the host of NFL RedZone, the wildly popular weekly that provides live look-ins of all 1 PM and 4 PM Sunday games.

Hanson, who deftly rides the fourth-quarter wave of adrenaline of the 1 PM window each Sunday, has been in the anchor chair for every RedZone broadcast since its debut in 2009.

We’d like to send our condolences to his bladder. He said in 2020 that he’s taken just one mid-broadcast pee break in his entire run.

Be sure to follow us on Twitter (@PFN365) to stay in the loop on all things around the NFL beyond news and rumors. Also, continue to visit Pro Football Network for in-depth NFL news and analysis concerning the 2021 season and beyond.

Adam H. Beasley is the NFL Insider for Pro Football Network. Follow him at Twitter at @AdamHBeasley.