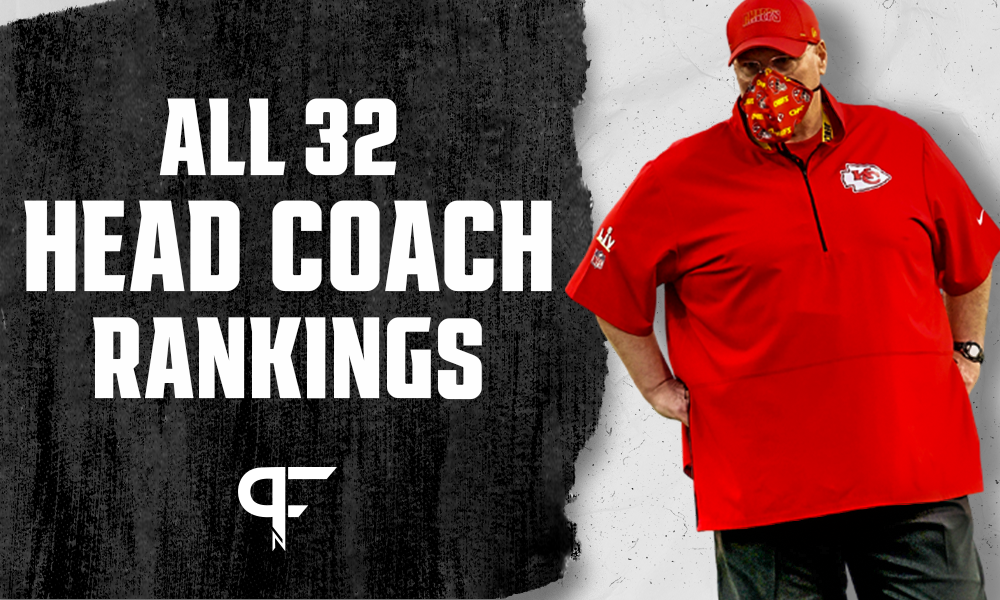 As we wind down to the remaining 11 in our rankings, which NFL head coach is the best?

Impossible to ignore despite inexperience tier

One NFL head coach belongs in a tier all by himself.

It’s tough to argue with a 26-6 record in your first two seasons. Matt LaFleur ranks high in the NFL head coach rankings not just for his record but for what the team’s been able to accomplish despite seemingly constant off-field distractions surrounding their starting quarterback.

He gets crushed (rightly so) for his decision to kick that field goal toward the end of the NFC Championship. Still, somehow Aaron Rodgers revitalized his Hall of Fame career after a streak of relatively down seasons.

Our top 10 of current NFL head coach rankings kick off with two guys that have been in the game for a long time.

This man just won the Super Bowl. He also won a lot of games with Carson Palmer while he was the head coach in Arizona. Furthermore, he won 9 of 12 games as the interim coach in Indianapolis. The 2015 Arizona Cardinals were a great team that ran into the buzzsaw that was the Carolina Panthers and MVP Cam Newton.

Putting Pete Carroll so high on the NFL head coach rankings feels dirty given his seemingly old-school style of play. Yet, we can’t ignore that the Seahawks haven’t won less than nine games since 2011.

In fact, he’s never had a losing season in the Russell Wilson era. Wilson might mask some of the flaws in Carroll’s style, but he consistently wins. What Carroll does so well is building a culture that players want to be a part of — for the most part.

Still somewhat new but appear to be a great tier

These two NFL head coaches could be in the top five this time next year.

Sean McDermott and offensive coordinator Brian Daboll have the Buffalo Bills humming. Before the Bills last season, no non-Patriots team had won the AFC East since 2008.

Josh Allen’s stock appears to be soaring toward the moon. In addition, the Bills’ defense has been top 10 in efficiency every year since 2018. That’s quite a feat, given how difficult it is to replicate defensive performance year-to-year.

Frank Reich might be a top-three NFL coach, but it’s tough to know after what’s been a revolving door at quarterback in his first three seasons as a head coach. Andrew Luck retired in August 2019, and the Colts won seven games with Jacoby Brissett as the starter.

In 2020, the only year with an over-the-hill Philip Rivers, the team went 11-5. Reich’s offenses appear to maximize the quarterback, and the defenses appear incredibly well-coached.

The offensive wizards that win tier

You can’t talk NFL offenses without these head coaches.

Sean McVay was the next big thing in the coaching world when he burst onto the scene to turn around Jared Goff and the hapless Rams. McVay deserves credit for tailoring an offense to work around the weaknesses of his quarterback. He also deserves credit for pulling the plug and actively attempting to upgrade from a quarterback who wasn’t bad but wasn’t leading the team to water.

The Rams have seemingly been in an aggressive win-now mode since his second season, and it will be interesting to see how his teams produce when the talent on the team naturally hits a valley.

Sean Payton graces the top-five of the NFL head coach rankings, but his toughest test as a head coach comes in 2021 after the departure of Hall of Fame quarterback Drew Brees. However, somehow the Saints are 8-2 in games that Brees has missed. Likewise, the 2020 Saints were successful despite their only true receiving weapon missing nine games.

All of the head coaches in our last tier of NFL head coach rankings will deserve Hall of Fame consideration when it is their time.

John Harbaugh has been one of the most consistently successful coaches in the NFL over his time in the league. In 13 seasons, he’s only posted one losing record in a historically tough AFC North division. He’s also won one of the few Super Bowls without the help of a Hall of Fame quarterback taking snaps.

Mike Tomlin’s teams haven’t always performed in the playoffs. Nevertheless, Tomlin has never had a losing record in his 14-year career. He just missed out on the all-time Super Bowl era coaching discussion as well.

Winning eight games despite playing with Devlin Hodges and Mason Rudolph in 2019 should have been enough to make a believer out of anybody. It’s what places him so high in the NFL head coach rankings.

I fought hard for Reid’s place on the all-time NFL coaches list, and he deserves to be just below Belichick on the current list. Reid went to five straight NFC championship games in Philadelphia with Donovan McNabb at the helm but could never finish off those seasons winning the big game.

Reid’s not given enough credit for what he did with the Chiefs prior to the drafting of Patrick Mahomes, which is something he deserves credit for as well. He’s an offensive mastermind, and if it weren’t for some head-scratching clock management, he might be the best.

Bill Belichick will grace the top of this list until he decides to hang up his hoodie and go home. That, or until somehow his teams perform so badly year-over-year that we’re forced to drop him. Belichick is the second-most winningest coach that did most of his damage during the Super Bowl era.

He has the most Super Bowl victories as a head coach. In his time with the Patriots, he’s won 17 division titles in 21 seasons. He also holds a .726 winning percentage while in New England.

Keep Reading! Top NFL head coach candidates to look out for in 2022