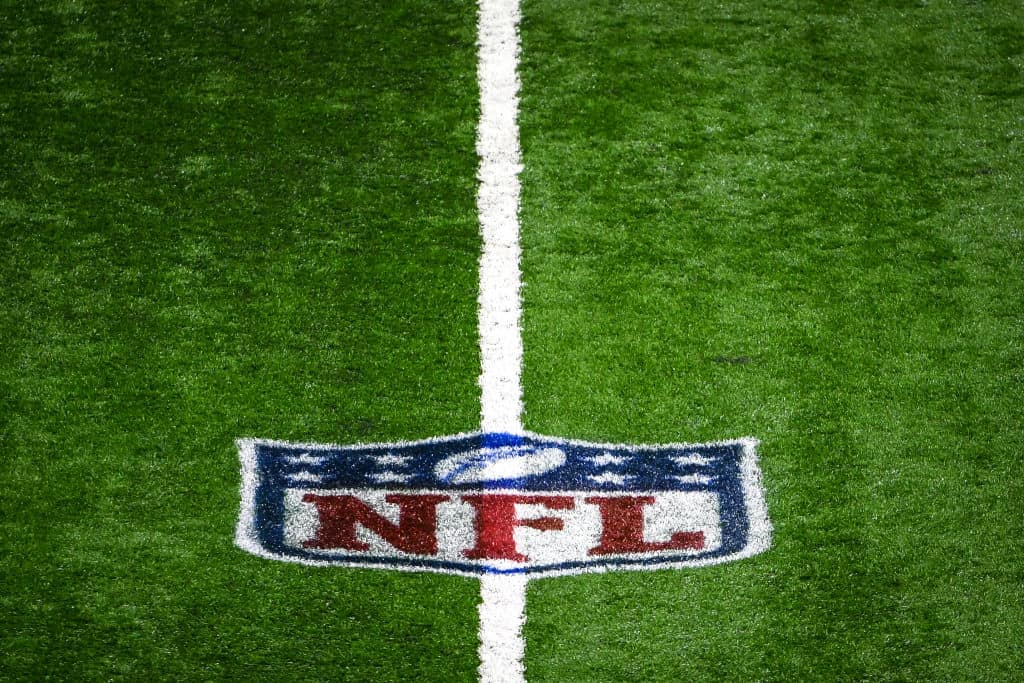 DETROIT, MI - NOVEMBER 15: An NFL logo is seen before the game between the Detroit Lions and the Washington Football Team at Ford Field on November 15, 2020 in Detroit, Michigan. (Photo by Nic Antaya/Getty Images)
What's in this article? Click to show
Who is playing NFL games today? How and where to watch NFL games in Week 14
Who plays on Sunday Night Football tonight?
Who faces off on Monday Night Football?
NFL games on TV today (Sunday) for Week 13

The NFL stream and NFL games today TV schedule in Week 14 features three divisional matchups. The postseason race is coming down to the wire as Sunday kicks off filled with fascinating storylines. The AFC East has a chance to tighten the AFC playoff race with some marquee playoff-caliber games. With a fresh set of games primed to go, let’s jump into your TV schedule for NFL games in Week 14.

Who is playing NFL games today? How and where to watch NFL games in Week 14

Below is a list of who’s playing today, what time the NFL games are on today, and their TV schedule and stream in Week 14. There are no more bye weeks for the remainder of the season.

You can see how and where to watch, but please remember to check your local listings for confirmation. For regional maps, you can click here. Be sure to check out our full 2020 NFL Schedule, which can be sorted by division, team, week, time, and more.

The NFL games today TV schedule wraps up on Sunday with a marquee AFC matchup between the Steelers and Bills at 8:20 ET on NBC. The Steelers’ Week 13 loss to Washington was a bit surprising, but few teams have gone undefeated. Things have now tightened up at the top of the AFC. The Steelers and Chiefs are neck-and-neck, and the Browns and Bills sit two games behind them.

The Bills have even more motivation, with Miami sitting right behind them at 8-4. Wins from both AFC East teams this week would bring both the Chiefs and Steelers closer to the rest of the pack.

The Browns will host the Baltimore Ravens on Monday night at 8:15 PM in FirstEnergy Stadium, according to the NFL games today schedule. Cleveland has a score to settle from Week 1 when the Ravens dismantled them 38-6. The Browns have come a long way since. Both of these teams dominate the ground offensively but fare well against it defensively as well.

This game may come down to who can make more plays through the air on Monday. While both Browns QB Baker Mayfield and Ravens QB Lamar Jackson have the capability to make those plays, their consistency can be questionable at times. Cleveland wants to keep control of the top AFC wild card spot, while the Ravens are fighting for one. However, the AFC North lead is a bit closer for Cleveland with the Steelers’ Week 13 loss.

The Texans kept it close with the Colts in Week 13 but ultimately came up short. However, Week 14 offers a better chance at victory for Houston. The Bears have lost six straight games and turned back to QB Mitchell Trubisky as Nick Foles failed to provide that Philly magic. Chicago also gets to face the QB it passed on to select Mitchell Trubisky with the second overall pick in the 2017 NFL Draft, Deshaun Watson.

Expect the Bears’ offense to find some traction against a Texans defense that has struggled this season. However, the matchup between Watson and the Bears defense should be thrilling.

One of the NFL games on TV in Week 14 includes two teams just trying to find their way to the end of the season without their starting QBs. Andy Dalton returns to Cincinnati for the first time after his Bengals tenure. Dallas is not necessarily a bad team when Dalton is leading the offense. The chances of victory depend on the performance of the defense. As of late, it’s been a bit suspicious, but with Joe Mixon and Joe Burrow out for the Bengals, things shouldn’t be too bad, right?

One of the better games on TV in Week 14, the Kansas City Chiefs head to Hard Rock Stadium to take on the Miami Dolphins. The Chiefs have played well all season and are still one of the best teams in the league. Miami is one of the most improved teams from last season, featuring a lockdown defense that has allowed just 212 points this season.

Xavien Howard, Byron Jones, and the Dolphins secondary will be tested by the wizardry Chiefs QB Patrick Mahomes displays on the field and all the weapons Kansas City has to offer. On the other side of things, Dolphins QB Tua Tagovailoa has a chance to take advantage of a mediocre Chiefs defense. It would not be surprising to see the Dolphins keep this one close.

Arizona needs to wake up if it wants to make the postseason. They are currently in the middle of a three-game skid and have a crowded room of opponents to navigate through. The Giants do not come as an easy win either. New York has won four straight games and propelled themselves to the top of the NFC East. The defense is playing well under head coach Joe Judge and gave Russell Wilson and the Seattle Seahawks trouble last week. Arizona HC Kliff Kingsbury and QB Kyler Murray need to find some answers, and quick.

Another one of the NFL games on TV in Week 14 includes two teams that control their playoff destiny. Minnesota is not a great team, but they have some players exploding on offense who are giving them a fighting chance. Vikings RB Dalvin Cook currently has 1,250 rushing yards this season, and rookie WR Justin Jefferson is producing an Offensive Rookie of the Year campaign with 1,039 receiving yards and seven touchdowns.

The Buccaneers have lost back-to-back games 27-24 but finally got their bye in Week 13. Can Tom Brady and Tampa’s offense keep up if the defense is unable to stop the Vikings?

This game kicks off at 1 PM ET, according to the NFL game today TV schedule. These are two young, up-and-coming teams looking to next season. Denver’s defense performed valiantly against the high-octane Chiefs offense, holding them to 22 points. Carolina returns from their bye week after a heartbreaking one-point loss to the Vikings in Week 12. The Panthers were supposed to have RB Christian McCaffrey return, but a snag in practice this week has him as doubtful for Sunday’s tilt.

Tennessee made the game look respectable, but Cleveland had their number in Week 13. They still have the lead in the AFC South and head into a favorable matchup against the 1-11 Jaguars. QB Mike Glennon continues to get the start under center for Jacksonville. The Jaguars defense struggles against the run, giving up third-most rushing yards per game this season. That’s never a good thing with Derrick Henry in the mix.

According to the NFL games today TV schedule, this matchup kicks off at 4:05 PM ET today. It’s do-or-die time in the AFC playoff race, and both of these teams have ground to make up. The Raiders are one blown defensive call from being 6-6. You don’t get Henry Ruggs wide open on a hail mary situation unless it’s the Jets…*checks last week’s schedule*… everything checks out.

What doesn’t check out is who this Las Vegas team is. A win this week is a statement that the Raiders can be a playoff team and contend in the AFC. A win for the Colts keeps them with the Titans for the AFC South. However, this game will be determined by which Raiders team shows up.

After last week’s performance, it seems the front office and coaching staff of the New York Jets have no issues with losing every game this season. This game should provide Seattle with a pick-me-up after getting embarrassed by the Giants last week. Russell Wilson and WRs D.K. Metcalf and Tyler Lockett should have their way with the Jets in Lumen Field.

The Lions join the Falcons and Texans with wins the week after firing their head coach. The possibility for a streak is almost certainly at zero, as they face off against Aaron Rodgers and a Green Bay team that is dominating the NFC North. With 36 touchdowns on the season and a chance to crack 5,000 yards, Rodgers is having another top-notch year.

According to the TV schedule, this NFL game kicks off at 4:25 PM ET today. Rookie QB Jalen Hurts gets his first start for the Eagles in Week 14. His first start will come against one of the best defensive fronts in the league. Saints QB Taysom Hill gets another start, and New Orleans continues to roll as the number one seed in the NFC.

While neither of these teams are vying for a playoff spot, there are some things at stake here. Falcons interim coach Raheem Morris has rallied this Falcons team together and turned around a defense that gave up 30-plus points the first four games. His counterpart, Chargers HC Anthony Lynn, is going to be a hot topic of conversation come the end of the season. A win here would go a long way in turning things around for Los Angeles.

Washington QB Alex Smith is Comeback Player of the Year no matter what, but if Washington makes the playoffs, it will be unanimous. Washington got swept by the Giants, so they fall short in the tiebreaker. The best path for Washington to make the playoffs is to keep winning games and force the Giants to keep up their performance. The 49ers also have an outside shot at the wildcard, which is crazy to think about, with how 2020 has treated them. Nick Mullens has done as well as you could expect, but Washington’s defensive front might be a bit much for the 49ers.