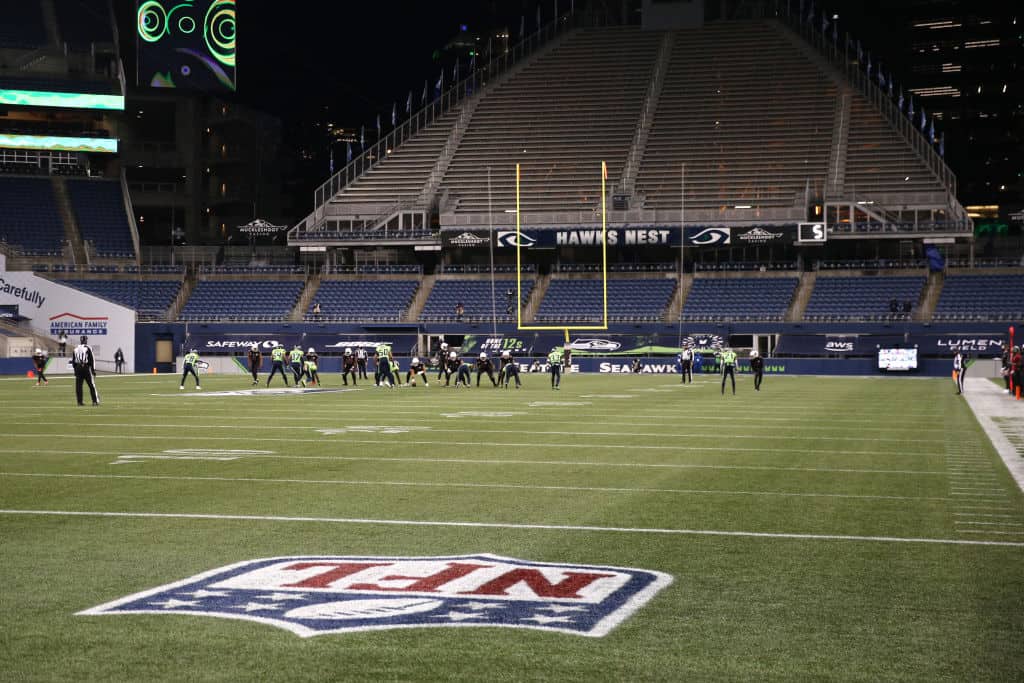 SEATTLE, WASHINGTON - NOVEMBER 19: The Seattle Seahawks and Arizona Cardinals line up for play in the second quarter at Lumen Field on November 19, 2020 in Seattle, Washington. (Photo by Abbie Parr/Getty Images)
What's in this article? Click to show
Who is playing NFL games today? How and where to watch NFL games in Week 11
NFL games on TV today for Week 11
Who plays on Sunday Night Football tonight?
Who faces off on Monday Night Football?

The NFL Stream and NFL Games Today TV Schedule in Week 11 features just two divisional matchups. Round two of the Kansas City Chiefs versus the Las Vegas Raiders caps off a Sunday filled with some very interesting storylines. A QB change in the NFC South makes one game nearly unpredictable. Will the Steelers struggle in another game they should win? With a fresh set of games primed to go, let’s jump into your TV schedule for NFL games in Week 11.

Who is playing NFL games today? How and where to watch NFL games in Week 11

Below is a list of who’s playing today, what time the NFL games are on today, and their TV schedule and stream in Week 11. The Buffalo Bills, Chicago Bears, New York Giants, and San Francisco 49ers are on a bye this week. You can see how and where to watch, but please remember to check your local listings for confirmation. For regional maps, you can click here. Be sure to check out our full 2020 NFL Schedule, which can be sorted by division, team, week, time, and more.

The Cleveland Browns’ defense takes a massive hit after defensive end, and league sack leader Myles Garrett was placed on the reserve list and will miss this game today. However, the Eagles surrender 133 rushing yards per game while the Browns cruise to 159 rushing yards per game. Week 11 was Cleveland RB Nick Chubb’s first game in over a month, and he came back with a 126-yard and one-touchdown performance. Look for the Browns rushing attack to break loose against the Eagles and open up the passing game for QB Baker Mayfield.

Well, well, well, what can you say about this game? The unthinkable has arrived, Taysom Hill will be the starting QB for the New Orleans Saints in Week 11 against the Atlanta Falcons. No one knows what will happen in this one, and many will eagerly await the first snaps from Hill under center today. I want to think Saints head coach Sean Payton knows what he’s doing, but this one is a bit of a head-scratcher.

Washington QB Alex Smith’s Week 10 performance was better than his three-interception Week 9 foray with the Giants, but Washington still came up short. Even at 2-7, they still have a chance to win the division, and this contest on the NFL Games today TV Schedule could help. Their defensive front should give Bengals rookie QB Joe Burrow fits while Smith continues to find his stride after returning from that horrific injury two years ago.

These two teams are both missing players due to injury, but the Carolina Panthers should be able to take advantage of a severely beat up Lions offense. Detroit’s rookie RB D’Andre Swift is out with a concussion, while WRs Kenny Golladay and Danny Amendola are out with hip injuries. The call for the Panthers starting QB will be a game-time decision, as HC Matt Rhule is still undecided on the progress of Teddy Bridgewater’s right knee sprain.

It’s take two of “the Steelers should dispatch a lousy football team,” and this time, expect it to happen. The Dallas game was a wake-up call in Pittsburgh, and they are not taking any of their opponents lightly, regardless of their records. Jaguars QB Gardner Minshew made his return to practice, but Jake Luton gets the nod for Week 11 in what could be his last hurrah. The Steelers’ vaunted rushing defense gets another challenge in rookie RB James Robinson.

According to the TV Schedule, this NFL game between the Titans and Ravens kicks off at 1 PM today. The Titans have been playing bad football recently, and a loss last week to the Colts opened up the AFC South. Tennessee’s defense allows 120.7 rushing yards per game with a road trip against the NFL’s best rushing offense. The Titans rushing attack isn’t far behind. With Ravens defensive lineman Calais Campbell and Brandon Williams doubtful for today’s matchup, this game could go by quickly with heavy amounts of rushing.

The Patriots defeated the Baltimore Ravens last week and were propelled by 173 yards on the ground and mistake-free football. The Texans struggled last week against the Browns, but can QB Deshaun Watson will this team to another victory? Watson has found success in his career so far against the Patriots, and despite David Johnson being out, he should have the rest of his offense today. If they can put up some points, the Texans could outpace the Patriots’ struggling offense.

A game that was initially scheduled to be played in Week 6 but was postponed, the Dolphins and Broncos finally face off in the 2020 NFL regular season. Denver QB Drew Lock will start after sustaining an injury in Week 10, but this is a horrible matchup against a formidable Dolphins defense. Miami QB Tua Tagovailoa is getting more comfortable as each week progresses, and the Dolphins are piecing things together at the right time.

The Los Angeles Chargers have had a rough season and recently lost to the Miami Dolphins. If HC Anthony Lynn can’t win this week against the 0-9 Jets, his seat will be red-hot. The Chargers defense gets DE Joey Bosa back from a two-game absence due to a concussion. Jets QB Sam Darnold is also doubtful for today’s game with a shoulder injury.

This game is enormous for Indianapolis. After defeating the Titans last week, they’re tied for first place in the AFC South. With another game against Tennessee on the slate next week, the Colts have a chance to overtake the AFC South completely. The Colts have one of the best defenses in the league right now in terms of minimizing yardage output. Will they be able to contain Aaron Rodgers and the Green Bay Packers?

According to the TV schedule, this NFL Game kicks off at 4:25 PM ET today. Dalvin Cook has been unstoppable these past three weeks, and while he only ran for 96 yards in Week 10, he was facing a Bears defense, which offered his best competition in this stretch. Now he faces the worst. Dallas gives up the second-most rushing yards per game at 157. Dalvin Cook should have a field day, and in turn, set up some of the success QB Kirk Cousins has been seeing as of late.

The second divisional game and final game to wrap up another NFL Sunday should be a thriller. Sunday Night Football on NBC features the Raiders, who took down the Chiefs in Week 5 40-32, giving Kansas City their only blemish on the season so far. The Raiders come in from thrashing the Broncos 37-12. Both teams are clicking, and it looks like this game will be Las Vegas’ chance to close the gap between them and Kansas City.

Rounding out Week 11’s NFL Games Today TV schedule is an intriguing NFC matchup. The Buccaneers offense bounced back after a Week 9 embarrassment at the hands of the Saints. The Rams defense has played well all season, and if the offense continues to utilize the running game to implement the play-action and get QB Jared Goff to view half of the field, this offense should also maintain its recent success. Tampa Bay’s defense needs to rattle Goff like Miami’s defense did in Week 8 and force him into errors.