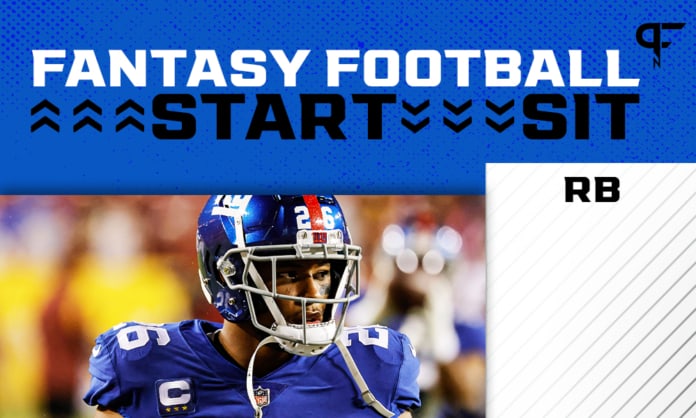 Following several masterful performances in Week 2, which RBs made the list of the top start 'em and sit 'em options for Week 3?

One of the most nerve-wracking things in fantasy football is making lineup decisions. You have to consider so many different variables. The great news is that the team at Pro Football Network is here to help. Not all matchups are equal, but here are our top start ’em, sit ’em RB plays for Week 3.

Which running backs are starts heading into Week 3, and which are better left on the bench?

Chase Edmonds rushed 8 times for 46 yards against the Vikings last week. He also caught all 5 of his targets for 29 yards. Through two games, Edmonds is the only running back for the Cardinals to be targeted as a receiver out of the backfield.

The 25-year-old Edmonds leads Arizona running backs in opportunities (rushing attempts plus targets). After examining his expected points (EP) and fantasy points over expectation (FPOE), I noticed Edmonds has been very effective with those opportunities.

EP is based on the average fantasy point value of plays in similar down, distance, and field position instances. FPOE, on the other hand, takes a player’s actual fantasy points and subtracts out the expected points. Where EP measures volume, FPOE measures efficiency. Drilling down on Edmonds, he’s averaged 4.1 more fantasy points per game than expected.

Arizona’s offensive line should have a significant advantage over Jacksonville’s defensive front. The Cardinals are favored by more than a touchdown against the Jaguars, with the total set at 51.5 points. Edmonds is an intriguing RB3 or flex with upside in Week 3.

Facing the Jaguars in Week 2, Javonte Williams amassed 64 yards on 13 rushing attempts. He also had a reception for 10 yards. Denver’s backfield is the epitome of a running back committee. Through two games, Williams and Melvin Gordon have an identical snap percentage (24%) and opportunity share (24%).

Thus far, Williams has done a great job creating yards after contact and breaking tackles. Additionally, the second-round rookie’s ability to pass protect is allowing him to remain on the field.

Denver’s matchup against the Jets provides Williams an opportunity to shine. The Broncos are 10.5-point favorites over New York. Denver’s offensive line has a notable advantage over New York’s defensive line, making Williams another RB3 who could exceed expectations in Week 3.

Devin Singletary rushed 13 times for 82 yards and a touchdown against the Dolphins. It’s worth mentioning that his touchdown was a 46-yard run. Meanwhile, fellow running back Zack Moss handled 8 carries for 26 yards and 2 touchdowns.

Moss is seeing more opportunities in the red zone while Singletary continues to be leaned on heavily between the 20s. The Bills are favorites in Week 3 against the Washington Football Team while the over/under projects a total of 46 points.

Washington’s defense allowed the Giants to score 29 points last week. Still, the Bills may struggle to run the football against the Football Team’s defensive front. The best way to attack Washington’s defense is through the passing game. As a result, you should consider sitting Singletary this week.

Myles Gaskin rushed 5 times for 25 yards against the Bills. He also caught 4 of 5 targets for 21 yards. After two games, Gaskin leads Miami’s backfield with 24 opportunities, putting him ahead of both Salvon Ahmed (15) and Malcolm Brown (10).

My biggest concern with Gaskin is the Dolphins’ offensive line. The unit’s inadequate pass blocking was highlighted on Sunday. Miami’s OL allowed 6 sacks and franchise quarterback Tua Tagovailoa had to exit the game with fractured ribs. The Dolphins’ running backs also struggled in pass protection.

Miami’s front five hasn’t fared much better in the run game. This unit doesn’t have a lot of pedigree. The Dolphins’ starting offensive line includes only one first-round pick in left tackle Austin Jackson. The Dolphins also haven’t had stability coaching the OL. Lemuel Jeanpierre is in his first season as Miami’s OL coach. In fact, the last time the Dolphins had an OL coach for consecutive seasons was from 2014-2015.

Combine all of these factors and add that backup Jacoby Brissett will be starting under center in place of Tagovailoa, Gaskin’s fantasy outlook against a red-hot Raiders defense does not look promising.