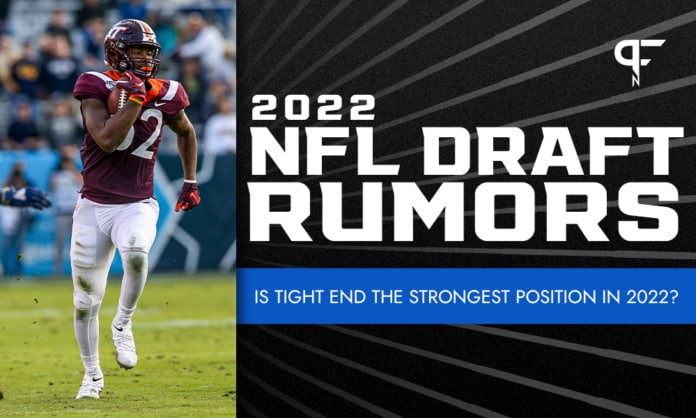 With the 2022 NFL Draft just six months away, let's open up the mailbag to talk about the latest news and rumors surrounding college football.

Week 5 of the college football season is all wrapped up. With the 2022 NFL Draft now just six months away, let’s open up the mailbag to talk about the latest news and rumors surrounding college football.

When you look at your big board right now, what position seems as though it will be the strongest in the 2022 NFL Draft?

Right now, I have to say tight end. I presently have nine tight ends graded as Day 1 or 2 picks. There are three more players at the position knocking at the door to be top-100 picks. Actually, four if you count James Mitchell of Virginia Tech, who was lost for the season with injury.

Georgia has a number of draft-eligible running backs this year. Which do you think will emerge as the best?

I have Zamir White graded a full round better than James Cook. Both are solid prospects but nowhere near the recent running back talent that’s come out of the Georgia program.

This interior defensive line class is kind of underwhelming on the surface. Are there any under-the-radar guys that you like as potential sleepers?

I’ve tweeted and written about John Ridgeway of Arkansas since the summer. He keeps playing better and better since transferring from Illinois State — where he played spring football this season.

Cory Durden has shown flashes of getting his game back to where it was in 2019 when he was dominant. Transferring from Florida State to NC State has been a good move for him.

Jerrod Clark of Coastal Carolina is a tremendous gap occupier and nose tackle type. Meanwhile, Arizona State has a pair of late-round sleepers in D.J. Davidson and Jermayne Lole.

All the defensive tackles I mentioned are Day 3 picks, although Ridgeway could sneak into the late part of Day 2.

Which wide receiver(s) is climbing up draft boards?

Every year, it seems like the WR classes have a lot of depth. Has anyone who started in the Day 3 conversation risen into Day 2 range just yet?

Depending on where you had him rated before the season, I would say Treylon Burks of Arkansas, who was playing lights out football. That is until the Razorbacks ran into the buzzsaw known as the Georgia defense.

Receiver Alec Pierce of Cincinnati has had some incredible catches during big moments of important games this season. The Notre Dame and Indiana games come to mind. He really seems like a gamer. What are you hearing about his draft stock?

I presently grade Pierce as a fifth-rounder — just about the same area where scouts grade him. I have my concerns about his speed.

Now, he’s having a terrific senior season, and I am told Pierce is expected to test off the charts at combine/pro-day workouts (40 times in the 4.4s, which is one-tenth faster than expected, and a vertical jump at or over 40 inches). If that’s true, he could slide into Day 2 of the NFL Draft.

Evan McPherson has twice surprised as a game-winner for the Cincinnati Bengals this season. Is there a kicker in the 2022 NFL Draft class that could come straight in and replicate his success?

NFL Draft Rumors: Who is QB1?

How do teams view Malik Willis and his potential fit with NFL offenses? Can/should he be in the QB1 conversation?

He’d be best in a timing offense or an offense similar to the one run by the San Francisco 49ers. A team will want to exploit his athleticism and ability to make throws or plays on the move.

Malik Willis is not lighting the world on fire this season. However, Sam Howell has not played well, and Spencer Rattler has not lived up to expectations. Those two reasons give Willis a chance to be the first quarterback selected.

Hopefully, Willis goes to the Senior Bowl and participates in practice. Senior Bowl practices have always been a kingmaker at the quarterback position.