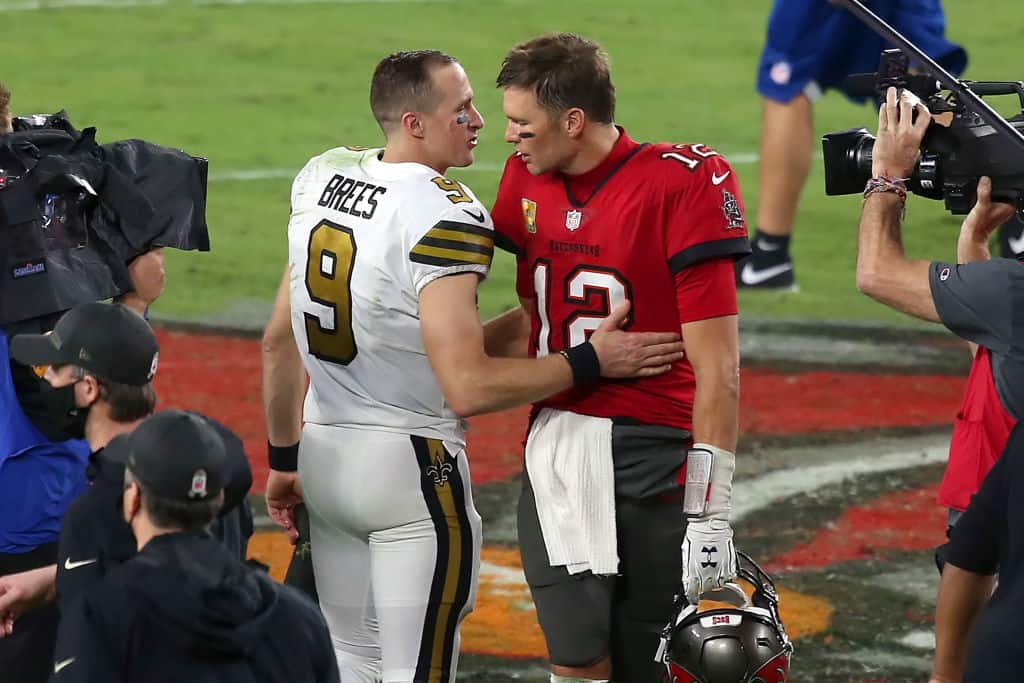 TAMPA, FL - NOVEMBER 08: Two of the greatest quarterbacks in NFL history Drew Brees (9) of the Saints and Tom Brady (12) of the Buccaneers share a few words of encouragement after the regular season game between the New Orleans Saints and the Tampa Bay Buccaneers on November 08, 2020 at Raymond James Stadium in Tampa, Florida. (Photo by Cliff Welch/Icon Sportswire via Getty Images)

After an enthralling Wild Card Weekend, the lineups for the NFL divisional round are set. We have four fascinating games to look forward to next weekend, each with their own intriguing subplots and storylines. Can Aaron Rodgers overcome Aaron Donald? How will the Buffalo Bills contain Lamar Jackson? Are the Cleveland Browns a match for Patrick Mahomes and the Kansas City Chiefs? Who wins, Tom Brady or Drew Brees? All the answers can be found right here in this week’s NFL divisional round predictions against the spread.

NFL Divisional Round Predictions Against the Spread

All spread lines are provided by DraftKings and were correct at the time of writing. They are, of course, subject to change the closer we get to kickoff.

The NFL Divisional Round kicks off in style as the league’s best defense attempts to stymie one of the most potent offenses in football. Can the Los Angeles Rams surprise the Green Bay Packers on Saturday evening?

There are so many great individual matchups to savor in this game. How will Aaron Rodgers fare with Aaron Donald bearing down on him every snap? Jalen Ramsey locked up D.K. Metcalf in the Rams Wild Card win over Russell Wilson and the Seattle Seahawks in the NFC West rematch, but how will he contain Davante Adams? The star wide receiver has been virtually unstoppable in 2020.

The Rams hold a slender advantage in the head to head record and won a close game the last time the two teams met. Prior to that, however, the Packers had won five straight and each victory had been in dominant fashion. Although the Rams might limit the Packers offensively, I just don’t see a way that Jared Goff or John Wolford can live with Rodgers and Adams for 60 minutes.

Predictions against the spread for the first of this week’s NFL divisional round games: The Packers win and cover the spread.

Josh Allen and the Buffalo Bills survived a close game with the Indianapolis Colts to advance to the Divisional Round. Their reward? A clash with a Baltimore Ravens team that locked down and ran roughshod over the Tennessee Titans on Sunday afternoon, dispelling the narrative that Lamar Jackson can’t win a playoff game in the process.

Although the Bills have appeared unstoppable in recent weeks on their way to the second seed, this game isn’t going to a walkover for them by any stretch of the imagination. The Ravens have one of the best defenses in the league. As a result, the matchup between Stefon Diggs and a secondary that contains Marcus Peters and Marlon Humphrey will be must-see TV. They’re also strong up front, posing a threat to Allen’s ability to run the ball.

The Bills haven’t been as impressive defensively as they are offensively. Therefore, the Ravens have a reason to believe they can come away with a win. Buffalo has allowed over 20 rushing touchdowns in 2020 and we all know how potent the Baltimore ground game is. As a result, we’re set for a classic battle on Saturday night.

Predictions against the spread for the second of this week’s NFL divisional round games: The Bills win but fail to cover the spread.

Baker Mayfield went toe to toe with Ben Roethlisberger to give the Cleveland Browns their first postseason win since the 1994 season. The win marked the first time the Browns have won consecutive games against the Pittsburgh Steelers since the turn of the century. The celebrations will be short-lived, however, as they face the Patrick Mahomes led Kansas City Chiefs on Sunday afternoon.

Whereas the Browns have been engaged in battle the last two weeks, Mahomes and the rest of the Chief’s starters have essentially had two weeks to relax. Although this sometimes acts as a momentum killer, we should see a Kansas City team refreshed and raring to go as they attempt to be the first back to back Super Bowl winners since the New England Patriots in 2004.

As ludicrous as it may seem, I honestly believe that this Chiefs’ team is better than they were last year. Mahomes and Tyreek Hill are operating on a different level and the defense is greatly improved. The Browns will definitely prove to be a handful on Sunday afternoon but ultimately the Chiefs should emerge victorious.

Predictions against the spread for the third of this week’s NFL divisional round games: The Chiefs win but fail to cover the spread.

It’s no surprise that the NFL scheduled this game to be the final one of the Divisional Round. NFC South rivals meet for the third time this season as the Tampa Bay Buccaneers travel to Louisiana to face the New Orleans Saints. There are multiple storylines that make this game a must-watch, but one is set to override them all.

Although the two iconic quarterbacks will never set foot on the field at the same time during Sunday night’s game, this will be the battle that everyone is talking about all week. Will Brady take another step to cementing his legacy? Can Brees lead the Saints to the Super Bowl for one last time? The two have traded NFL records in recent years, and their twilight years will be forever intertwined. Which one will emerge victorious on Sunday night?

The Saints have won the last five games between the two teams. They also swept the regular-season series in commanding style this year. However, the Tampa Bay offense has looked significantly better recently than the abysmal performance that saw them muster just three points against the Saints back in November. Additionally, they’re well equipped defensively to deal with the Saints ground game with Alvin Kamara.

This game could go either way. However, I’m willing to bet on Brady outlasting Brees for a narrow win.

Predictions against the spread for this final NFL division round game: Tampa Bay wins and covers the spread.