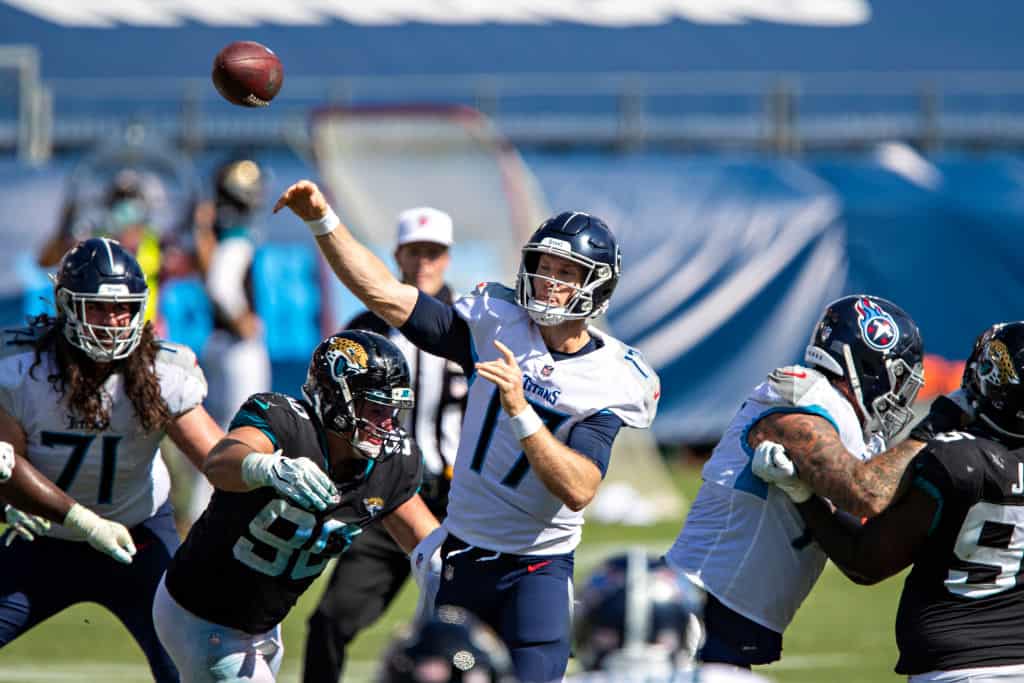 Pro Football Network’s betting team continues to provide value and winners with their NFL best bets. Week 3 should be no different as we look to find early value on the opening numbers and spreads. After the first two weeks, the team is currently up 24.35 units overall, including a 20-8 (+23.5 unit) record ATS!

After only two weeks into the NFL season, the Minnesota Vikings have already proven that replacing a bunch of bonafide stars with draft prospects and free agents could take some time to mesh together. After starting the season 0-2 and allowing 71 total points to the Packers and Colts, the Vikings and their defense are struggling.

The offense isn’t helping all that much, with Kirk Cousins putting up a putrid performance against the aforementioned Colts. Cousins went 11 of 26, for 113 yards and three interceptions. Fun fact? Stefon Diggs, in his performance against Miami, put up more receiving yards (153) than Cousins threw for.

The Titans, on the other hand, are now 2-0 after less than convincing wins against the Broncos and Jaguars. Ryan Tannehill put up impressive numbers against Jacksonville, but their vaunted defense allowed Gardner Minshew to throw for 339 yards and three touchdowns in their comeback attempt.

This number opened as a pick-em but has slowly moved towards the Titans. Now, Tennesse is laying less than a field goal on the road. With how bad Cousins looked, it is not surprising that money is coming in on the Titans.

Resident betting analysts Chris Smith, Drew Haynes, and James Aguirre have all grabbed the Titans laying 1.5. I recommend doing the same. Even if Cousins finds a way to bounce back, his options are throwing to Dalvin Cook out of the backfield or Adam Thielen. The reality is that this team simply doesn’t have the weapons right now.

Even though the Vikings are 9-4 against the Titans all-time, Mike Vrabel should have this defense straightened up for this matchup. The Vikings offense will likely be held to under two scores again this week as the Titans continue to try and pull away from the rest of the pack in the AFC South.

I initially didn’t understand this spread at all. However, I think the Titans are “only” 1.5 point favorites because of their sub-par yards per play differential to start the year (-0.7). The Minnesota Vikings have a smaller differential (-0.3), but a lot of that is buoyed by their fourth-quarter performance against the Green Bay Packers in Week 1. They averaged a putrid 3.7 yards per play against the Indianapolis Colts, who still has a defense that I’m not sure what to make of.

If we just go into my opinion of these two teams, the Vikings are terrible this year. Their defense (secondary in particular) is young, inexperienced, and can’t get off the field. The offense doesn’t have the firepower to keep up with the points the defense inevitably surrenders.

Tannehill has kept up his ridiculous efficiency to start the year, with a 9% touchdown rate on this throws. Regression will come eventually for this Tennessee squad, but once again, I don’t think it’s this week. I’d be astonished if this spread doesn’t reach Titans (-3), so grab it under the key number of three while you still can.

Official plays by our other cappers

This is a battle of undefeated teams as the Los Angeles Rams head to Buffalo to take on Josh Allen and the Buffalo Bills. After sweeping both their NFC East opponents, the Rams and head coach Sean McVay seem to have figured out a way to surprise opposing defenses, similar to 2018.

Meanwhile, Buffalo is proving they can succeed both in the run game and with Allen’s arm. For me, the most significant factor here is the quality of opponent the Bills have played. While they have looked good, that has been against the Jets and Dolphins. And, even in their two wins, they only covered the spread once and let the Dolphins come back to nearly win the game. They haven’t faced anyone like the Rams yet, with a defense that features Jalen Ramsey and Aaron Donald, and an offense with legit playmakers, even with Cam Akers likely to miss this game.

The Rams beat the high flying Cowboys in Week 1 and stomped all over a decimated Eagles team in Week 2. They are a better team than Buffalo, and even if the Bills have an impressive defense and secondary, if Ryan Fitzpatrick can put up 28 points, Jared Goff can do the same.

The Rams actually opened at +3, and this number has already ticked down to under the field goal. Take this number before it gets any lower, I can see a Rams win straight up, but I will happily take the 2.5.

There were some Rams (+3) lines available that were quickly gobbled up by the early betting market. I wish I could say I was part of that group. I’ve been much more impressed by the Rams in this early season than the Bills.

Los Angeles has outgained the Dallas Cowboys and Philadelphia Eagles by nearly a full yard per play (0.9), which would equate to them being 4.5 points better than an average team on a neutral field.

The Bills have been impressive as well, but their competition has been far more inferior. I have these teams as equals at the moment, which would mean Buffalo should be about a one or two-point favorite. If you can still get a (+3), then fire away. I wasn’t able to, which is why I’m going with the money line.

I know the Baltimore Ravens have been an absolute machine for the first two weeks, but it isn’t often we get Patrick Mahomes and Andy Reid as underdogs. I don’t care how good the Ravens defense has been thus far (4.9 yards per play allowed, fourth-best in the league); this is the Chiefs.

I trust Reid and Mahomes to come up with a game plan to attack this unit properly. Don’t forget, the Chiefs beat the Ravens last year when they traveled to Kansas City, and the game wasn’t as close as the final score indicates.

Kansas City did struggle to score this week because the L.A. Chargers ran the ball and kept possession. Can the Ravens do that, and do they even want to?

Baltimore’s offense is rolling nicely under the reigning MVP Lamar Jackson and can score just as quickly and be just as potent as Kansas City. Both defenses might be underrated, but it’s hard to see either consistently stopping these offenses.

Atlanta is in desperate straits after blowing a 19-point halftime lead at Dallas to fall to 0-2. Chicago is 2-0, but goodness knows how, as they struggled to hold off the Giants despite Saquon Barkley leaving with an injury.

Despite the poor start, the Falcons offense is rolling. After two weeks, they have nearly 900 yards. The Bears will need a superhuman effort from Khalil Mack and the defense to have any chance, and I don’t think they can keep the Falcons contained long enough.

Other NFL Week 3 early best bets from our expert handicappers

I may have been a little premature taking this spread. Even with Nick Mullens, the 49ers should still be able to win this game by at least a touchdown. I like the coaching advantage here for San Francisco and the fact that they will be staying on the East coast to mitigate the travel disadvantage.

While the New York Giants offense seems to be in the stone age, they have actually passed more on early downs than any team in the league in the first two weeks. Without Nick Bosa, the Giants will have more success than they normally would. I would tread lightly here, even though I have already taken the (-3.5).

I think there is a noticeable difference between Jimmy Garoppolo and Mullens, so obviously, I’d want Garoppolo to be starting to feel comfortable. If Garoppolo is the starter, this spread could reach (-6), so if you like the 49ers as I do, you want to hop on sooner rather than later.

I understand if you think this game is un-bettable. I believe in the depth of this 49ers team and Kyle Shanahan to put Mullens in advantageous situations.