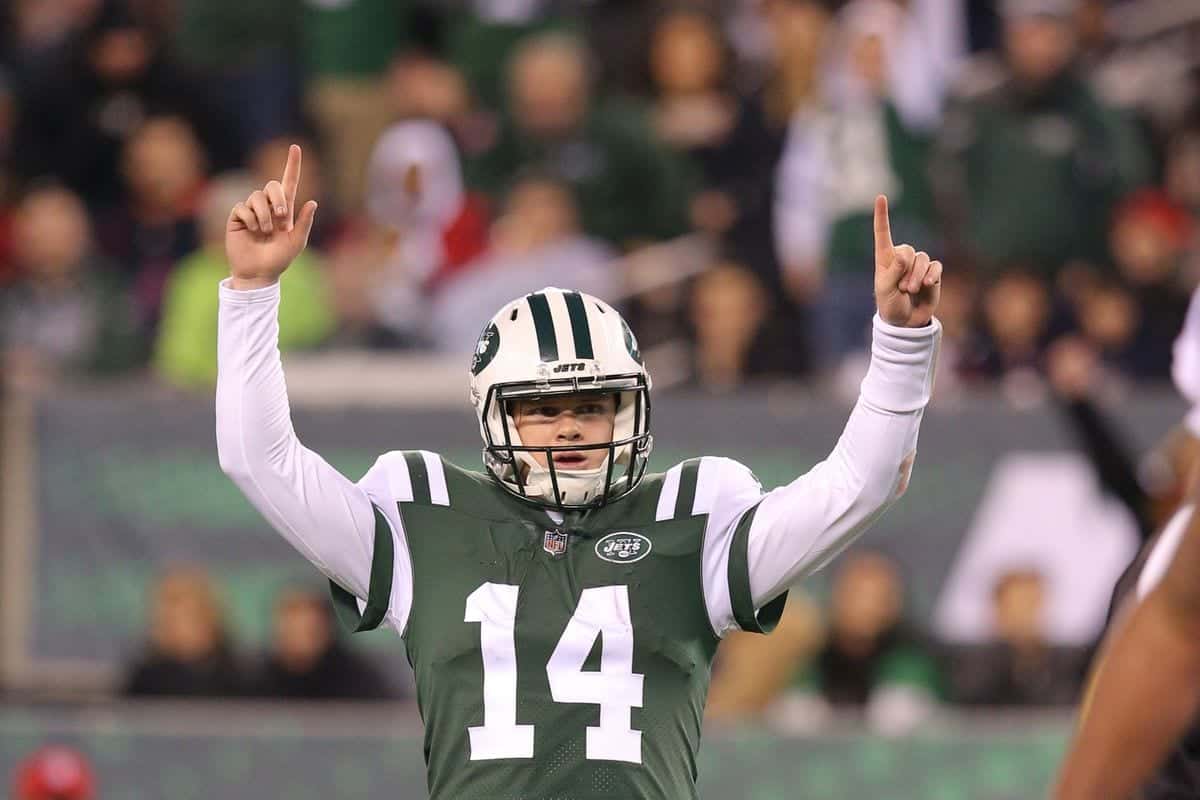 Photo Credit: Brad Penner/USA Today
What's in this article? Click to show
The New York Jets finished the 2018 season 4-12 and promptly fired head coach Todd Bowles. But the team has young pieces to build around, over $102 million in cap space this offseason, and the 3rd pick in the NFL Draft.
Free Agency & Trade Market
NFL Draft
Outlook

The New York Jets finished the 2018 season 4-12 and promptly fired head coach Todd Bowles. But the team has young pieces to build around, over $102 million in cap space this offseason, and the 3rd pick in the NFL Draft.

The Jets began their offseason by hiring quarterback whisperer Adam Gase to take Sam Darnold‘s game to the next level. Darnold flashed signs of competence in the National Football League throughout his rookie campaign. The 21-year old passer finished second in passing yards and touchdowns among rookie quarterbacks. Under the guidance of Gase, Darnold should be able to take the next step in his development.

As head coach of the Miami Dolphins, Gase hitched his wagon to quarterback Ryan Tannehill. This was obviously a big part of his downfall. But before the QB suffered a torn ACL in a 2016 week 14 game against the Arizona Cardinals, fans were celebrating the head coach for taking Tannehill to the next level. Tannehill posted career highs in both completion percentage and quarterback rating that season. More importantly, he had the look of a player who finally found “it” before suffering the torn ACL. If Darnold can stay healthy, the marriage between he and Gase could prove to be a fruitful one.

On defense, the Jets are led by 23-year old safety Jamal Adams, who is coming off of his first Pro-Bowl appearance. According to Pro Football Focus, Adams graded 5th among 172 qualifying safeties. Adams logged 1,119 of 1,121 snaps this season for New York, which is incredible considering his bruising style of play. With the addition of defensive coordinator Greg Williams to the coaching staff, this defense should show significant growth from last year when they ranked just 25th in yards and 29th in scoring.

With over $102 million available and no key free agents of their own to focus on, the Jets look primed to be active in free agency. Adam Gase is known to sign players that have worked under him in the past, and he loves proven vets who fill a need, even if they’re only a stopgap. Below is a list of players New York should target. They would be wise to use their cap space to build around Darnold and Adams. Some options include:

Bell could be the workhorse that the Jets have missed since the Thomas Brown era from 2007 – 2009. Signing one of the best backs in the NFL would alleviate much of the pressure off of their young quarterback.

Brown has requested a trade from the Pittsburg Steelers and, after a meeting with team owner Art Rooney, the team will work to facilitate his request. New York would be a logical landing spot for the disgruntled wide receiver, giving Darnold a truly elite target.

Thomas played under Gase while the two were in Denver. The pass catcher could provide veteran leadership to a young group of receivers and be a reliable possession target for Darnold.

Tate is one of the best yards after catch receivers in the NFL. Gase could fit him into the same role he carved out for Albert Wilson in Miami.

Thomas is coming off a broken leg and could be signed to a 1-year prove it style contract. While most expect him to wind up in Dallas, New York could be the right spot. Thomas’ 28 career interceptions rank 10th among active players. His ball-hawk style would pair nicely with Adams who plays primarily in the box to defend the run.

Gase drafted Minkah Fitzpatrick in Miami last year and gushed about his skill set all year. Fitzpatrick has drawn comparisons to Mathieu dating back to his time in Alabama so it would make sense for the Jets to go after the multi-positional player.

This signing would check both of Gase’s free agency boxes; played under him previously, and proven veteran who can fill a need right away in the short term. Even at 37 years old, Wake continues to be a productive pass rusher. With the Dolphins likely going towards a youth movement of their own, Wake could have played his last down in Miami.

With the 3rd overall pick in the NFL Draft, the Jets will be able to select one the elite talents available. If they stay put and don’t trade back, the most logical choices would be along the defensive line. These are the players I think New York should target.

At one time, it seemed like a foregone conclusion that Bosa would be selected number one overall. But recent rumors suggest that the Arizona Cardinals are in love with quarterback Kyler Murray. In New York, Bosa could come in and contribute immediately like his older brother Joey did with the Chargers. He would instantly improve the Jets’ weak pass rush.

Williams is a freak athlete who would pair nicely with defensive tackle Leonard Williams. A duo of “Williams squared” rushing from the 1 & 3 gaps could be comparable to what we just witnessed in Los Angeles with Aaron Donald and Ndomukung Suh.

Allen is my top player in the 2019 draft. If Allen’s on the board at three, the card should be turned in immediately. Along with his elite pass rushing ability, Allen has also shown the ability to cover tight ends and running backs.

Gary’s combination of size, strength, and speed has scouts buzzing. Gary can play 4-3 DT or 3-4 DE. This versatility is hugely beneficial to a coaching staff that will run multiple fronts.

Oliver’s measurables are almost identical to those of back to back Defensive Player of the Year award winner Aaron Donald. Oliver isn’t as polished with his pass rushing skills as Donald was coming out of college. But his film is impressive and shows that Oliver is still raw and could develop into an elite interior rusher.

The New York Jets have a number of factors working in their favor as they attempt to reverse the course of the franchise. They have a young core of players to build around on offense and defense. They have the 2nd most cap space in the NFL. And they have the third overall pick in the NFL Draft.

Gase’s time in Miami ended poorly, but he’s not a bad coach and should learn from his critical mistakes. Signs of growth are already apparent with the hiring Greg Williams to serve as his defensive coordinator. During his time in Miami, Gase was unwilling to hire outside of his buddy system, which led to Matt Burke operating one of the worst Dolphins’ defenses of all time. Williams will be the defensive head coach while Gase focuses on his offense and quarterback Sam Darnold.

As long as the two personalities don’t clash, the Jets should be a well-coached team. And if the front office makes the right moves in free agency and the draft, the Jets could position themselves as the AFC East team ready to take over the throne when New England’s inevitable downfall finally happens.