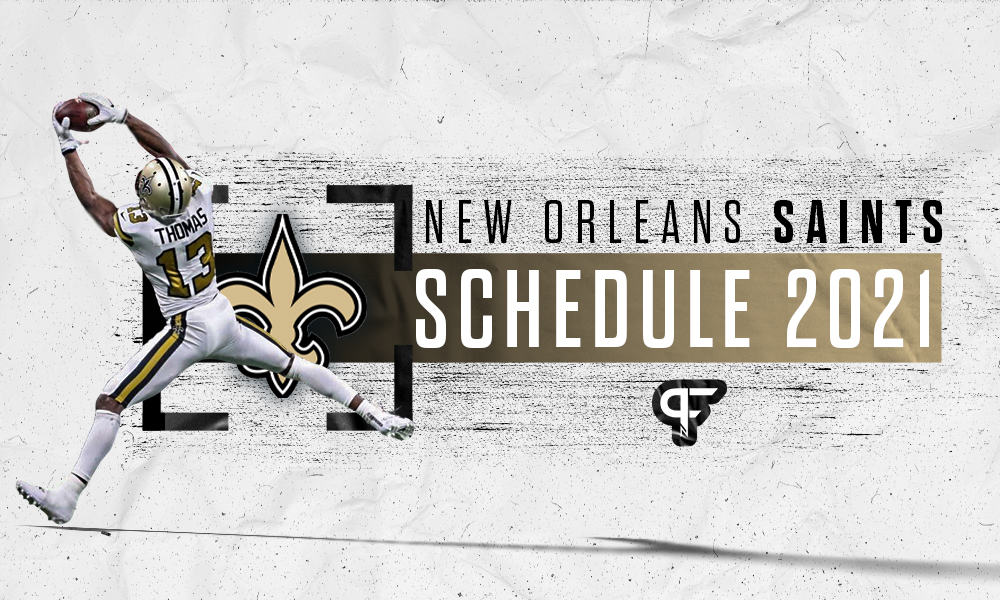 By Ian Cummings
May 12, 2021
What's in this article? Click to show
New Orleans Saints Preseason Schedule
New Orleans Saints Schedule | 2021 Regular Season
How many primetime games do the Saints play in 2021?
When is the Saints’ bye week?
Saints’ strength of schedule and win/loss prediction
Want more NFL news and analysis?

What is the New Orleans Saints’ 2021 NFL schedule, how many times will we see them in primetime games, and who are the toughest and easiest opponents on their schedule?

How many primetime games do the Saints play in 2021?

The Saints will play five primetime games in 2021. They will be against the Seahawks in Week 7, the Bills in Week 12, the Cowboys in Week 13, the Buccaneers in Week 15, and the Dolphins in Week 16.

When is the Saints’ bye week?

After seeing Drew Brees retire ahead of the 2021 league season, the Saints would have liked an easy schedule to help aid the transition. However, that has not been the case, as they tie for the seventh toughest schedule in the NFL. Included in that is the fifth toughest home schedule for 2021.

Two of those games come against the Tampa Bay Buccaneers within the division. The Saints had won five straight against Tampa Bay before Tom Brady and company knocked them out of the playoffs last season.

The other two games come at home against the Buffalo Bills and Green Bay Packers. Buffalo will enter 2021 looking to prove last year was not a fluke, making them a tough out every single week. Green Bay defeated the Saints last season, but how they shape up this season will largely depend on how the Aaron Rodgers’ situation is resolved.

The Saints’ schedule contains five games against teams projected to win seven or fewer games. Two of those games, in fact, come against the Atlanta Falcons, who the Saints have beaten in six of the past seven meetings. Perhaps even more promising is that both of the victories in 2020 came with Taysom Hill under center, showing they can beat their rival without their talisman quarterback.

The remaining three games see them take on two teams in the NFC East, Philadelphia Eagles, and New York Giants. Both the Eagles and Giants QBs are fighting for their careers in their second and third seasons, respectively. The final game comes against the New York Jets, who won just two games last season. However, they will be a very different proposition in 2021 with rookie QB Zach Wilson under center and new head coach Robert Saleh.

New Orleans will be hoping for a smooth transition from Brees to whoever earns the starting role in 2021. However, the Saints’ 2021 schedule is not going to give them an easy path back to the playoffs this year. The first question around the Saints will be who wins the QB battle, and that could shape the entire season.

There is a wide contrast in what we could see with Jameis Winston under center compared to Hill. Winston would bring a more dynamic approach, but with increased risk, while Hill’s offense would likely be more reserved but safer. Ultimately, regardless of who is under center, the depth is not on the Saints’ roster to get back to the playoffs this season.