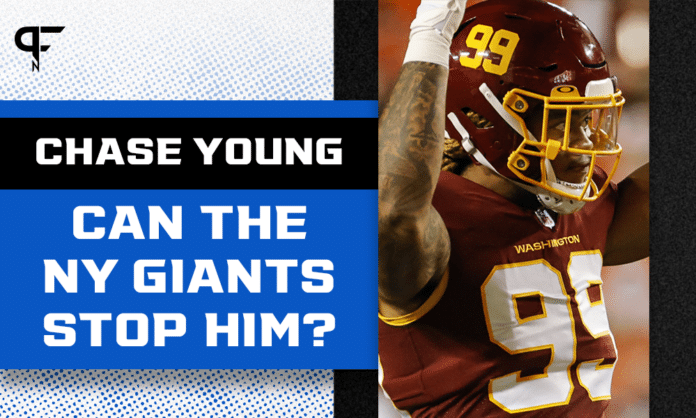 Neutralize Chase Young? Giants up for the challenge on Thursday Night Football

Can Chase Young be neutralized by the Giants' offense on Thursday Night Football? Joe Judge and Daniel Jones are ready for the challenge.

The New York Giants will take the field on Thursday Night Football against the Washington Football Team. When they do, they’ll be looking at a phenom standing across from them by the name of Chase Young. Make no mistake about it, though — Giants head coach Joe Judge and quarterback Daniel Jones are well aware of what awaits them at FedExField in Landover, Maryland.

In his press conference on Tuesday, Judge spoke of Young and his counterpart Montez Sweat and how much of an impact they can make on any single play. More importantly, it’s how they make an impact once the ball is snapped.

In his first two years in the NFL, Sweat recorded 95 tackles, 25 quarterback hurries, and 16 sacks. The 26th overall pick of the 2019 NFL Draft, Sweat is looking to build on his Week 1 performance against the Los Angeles Chargers, where he had 4 tackles and 1 sack.

Sweat fared better than Young did in Week 1, but that’s not stopping Judge from praising Young and the impact he’s made in just one season in the NFL. Young was the No. 2 overall pick in the 2020 NFL Draft. He burst onto the scene playing in 15 games, racking up 44 combined tackles (10 for loss). He added 7.5 sacks, 4 forced fumbles, and 12 quarterback hits. Young is — in one word — phenomenal.

Judge recognizes it, even going so far as to say that no one has misevaluated Young. And maybe he didn’t go high enough in the NFL Draft.

“Chase is a rare guy. To be that big, that fast, that strong, that powerful, and that athletic. I think this guy really, you look at the traits this guy has off the field. I mean, this guy’s a true leader,” Judge explained.

“This guy’s a bell cow for these guys. He was as a rookie last year. You can see the way they rally around him and you can see the way he works and prepares, and it comes in a game right there. I mean, this guy’s a special player. He’s really one of the elite guys in the league.”

Can Young live up to the hype from Judge and rebound from a lackluster Week 1 performance? Almost always, the answer would be a definite yes. But Young is coming off a game where rookie Rashawn Slater kept him in check, allowing no sacks or quarterback hits.

However, Giants QB Daniel Jones — who is 4-0 against Washington in his career — isn’t about to be fooled, noting just how good of a player Young is. That said, he was also careful to note what the Chargers did well on offense to neutralize Young’s ferocious pass rush.

“He’s a good player, he’s proven that. Like I said, we’ll be ready for him. I thought Herbert did a good job getting the ball out on time and making reads and being decisive there, so that’s the challenge,” Jones said. “We’ll protect well and then understand where we are as far as communication, getting on the same page, and then me getting the ball out of my hands.”

Jones understands what the Giants need to do to limit Young, Sweat, and the rest of the Washington defense. Executing it is an entirely different story, especially with injuries to Evan Engram, Saquon Barkley, and Kenny Golladay. But regardless of who Jones has on the field with him, he’ll be ready.