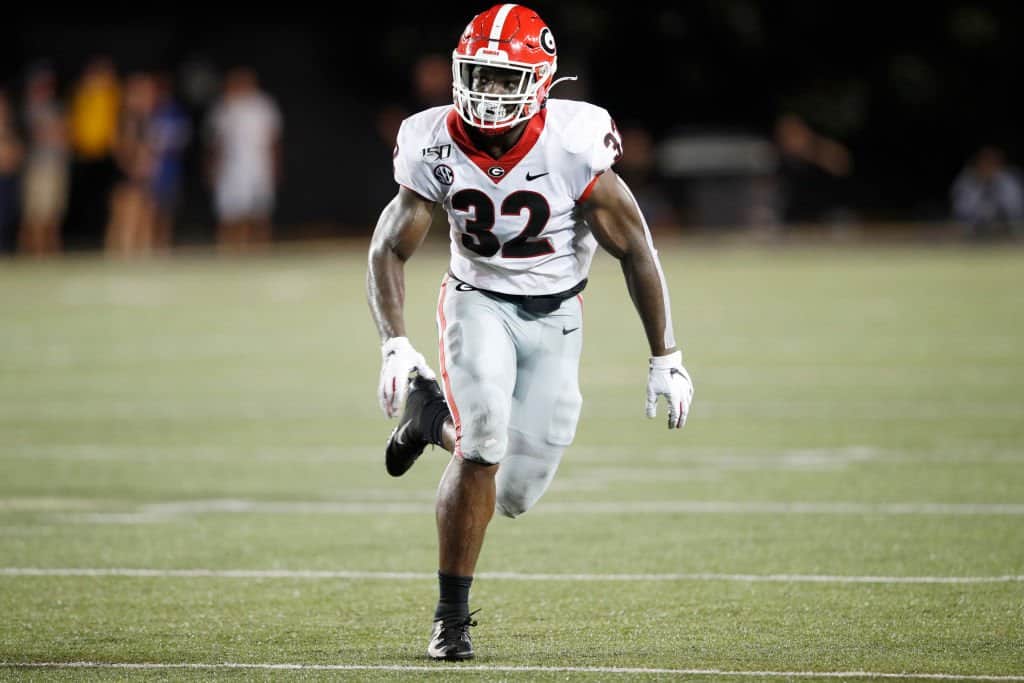 Although there is a lot of attention on Georgia outside linebacker Azeez Ojulari ahead of the 2021 NFL Draft, teammate Monty Rice also has the potential to hear his name called later this spring. What does the Georgia linebacker bring to the table, and where might he fit in this linebacker class?

Positives: Slightly undersized linebacker who displays speed in every direction. Efficient, breaks down well, and takes proper angles to the action. Fast in pursuit, possesses a closing burst, and attacks ball handlers. Instinctive, quickly reads and diagnoses the action, and flashes on the scene. Effectively quarterbacks the defense making the calls. Gets depth on pass drops, goes sideline to sideline, and makes plays in space against speedy receivers.

Negatives: Struggles getting off blocks and is easily slowed at the point. Doesn’t stack well against the run.

Analysis: Rice is a run-and-chase linebacker who is effective in all facets of the position, but he needs a free lane to the action. He stands out in pursuit and is effective in coverage, which gives Rice a large amount of scheme versatility.

After spending one year at St. John Paul II High School in Huntsville, Alabama, Monty Rice made a name for himself at James Clemens High School. As a junior, he recorded 79 tackles, 11 tackles for loss, and 5 pass breakups. Additionally, he proved himself to be somewhat of a turnover machine. He secured 3 interceptions while forcing and recovering 3 fumbles.

As a four-star recruit per 247 Sports, Rice was already garnering attention prior to an explosive senior season. The 18th-ranked inside linebacker had multiple SEC offers, including from Alabama. Despite this, he remained uncommitted to a team while putting together a senior campaign that saw him voted to the Class 7A first-team All-Defense. Rice had 137 tackles, including one sack. He once again proved his turnover prowess with 4 interceptions.

Following an early December visit to Baton Rouge, Rice committed to LSU. Something didn’t sit right with the young linebacker, however. He flipped his commitment to Georgia, saying at the time: “When I committed to LSU, I was still considering Georgia. Now I have decided that is the school for me. I just feel Georgia is a safe selection.”

Despite entering a Georgia linebacker group that contained future NFL Draft first-rounder Roquan Smith, Monty Rice made an early impression in Athens. He made his first appearance as a freshman against Appalachian State before getting his first start against Missouri. In his opening season, he contributed 22 tackles, including 2 tackles for loss.

His role would increase in 2018 and so would his production. He made five starts and registered his first pass breakup against South Carolina. However, his breakout game would come against Florida. Rice racked up a then career-high 11 tackles, and the high school turnover machine secured his first forced fumble as a Georgia linebacker.

With D’Andre Walker departed to the NFL Draft, Monty Rice saw his role increased again. He led the team in tackles with 89, including 3 tackles for loss. He also flashed some coverage ability with 3 pass breakups. His performances saw him earn second-team All-SEC honors, and he was the co-recipient of the Vince Dooley Award as the Bulldogs’ defensive MVP.

Despite receiving some NFL Draft buzz, Monty Rice decided to return to Georgia for his senior season. In a disrupted and shortened season, he earned first-team All-SEC honors and was a finalist for the Butkus Award. In a season where he set career-high tackles for loss, one game stood out amongst the rest. Against Tennessee, he logged only his second career sacks while recovering a forced fumble for his only career touchdown.

Following the 2020 college football season’s conclusion, Georgia linebacker Monty Rice opted out of the Peach Bowl and declared for the 2021 NFL Draft.

Georgia linebacker Monty Rice has several attributes that make him a desirable 2021 NFL Draft prospect. Before getting into his specific skill set as a linebacker, it’s worth noting his leadership on the field. Rice was a team captain in three games during the 2020 season and a vocal leader, in addition to leading the team with his play.

From a play standpoint, he excels in run defense. He has an excellent nose for the ball and can fight his way through a crowd of players to get to the ball and make a play. He showcases good explosion and short-area quickness, which helps him quickly get to and behind the line of scrimmage to make a play.

Unsurprisingly for a player who ranked fifth in forced fumbles and 10th in tackles in the SEC in 2020, Rice showcases good tackling form. Additionally, he has strong hands in order to force fumbles, as evidenced throughout his football career.

Finally, he has special teams experience from his time at Georgia, which helps add value to his stock.

What are some potential concerns with Monty Rice?

There are several concerns with Georgia linebacker Monty Rice as it pertains to his 2021 NFL Draft stock. The first is with his height and weight. At 6’1″ and 238 pounds, he may be a little on the small side to be consistently competitive against more physical players in the NFL.

Despite being highly productive in pass coverage as a high school player, this is an area where he falls short. He is an excellent run-stopping linebacker, but as the NFL continues to be a more pass-oriented league, Rice’s shortcomings in coverage will limit his usage and, therefore, his stock.

Up until this last season, he didn’t see much time on the field in third-down situations. This, combined with the coverage issues on his film, may limit him to being a two-down linebacker in the NFL. Once again, this limits his NFL Draft stock, and teams prefer players who can stay on the field on all three downs, helping to create defensive disguises.

Monty Rice could be an excellent 2021 NFL Draft selection for a team in need of a run-stopping linebacker. Although he has played as an inside linebacker in Georgia’s 3-4 defense, he could also fit as the middle linebacker in a 4-3 system. Some teams with linebacker needs include the Cleveland Browns, Los Angeles Rams, and New York Giants.

In my latest mock draft for Pro Football Network, I placed him with the Kansas City Chiefs as a third-round pick. However, NFL Draft Analyst and Insider Tony Pauline has an even higher opinion of the Georgia linebacker. In his latest big board for Pro Football Network, Pauline lists Monty Rice as his fourth-ranked inside linebacker and 62nd overall NFL Draft prospect. Pauline gives him a second-round grade.