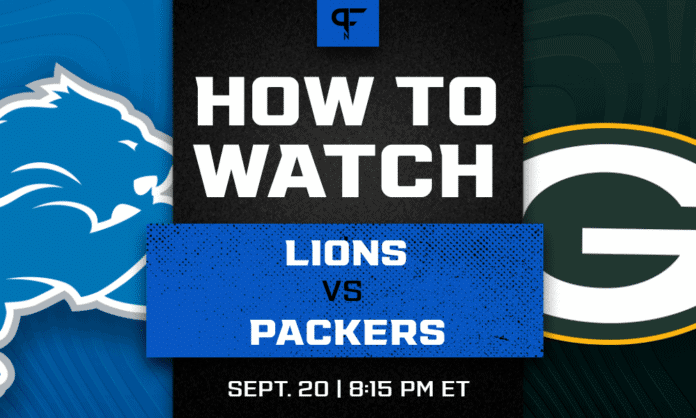 Who plays in the Week 2 Monday Night Football game tonight? The Detroit Lions face off against their divisional rival, the Green Bay Packers. Green Bay hopes to rebound from a horrific season debut against the New Orleans Saints. Meanwhile, the Lions aim to keep the momentum from their comeback attempt against the San Francisco 49ers. Here’s all the information you need on which channels and live streams are broadcasting Monday Night Football.

What to expect from Lions at Packers?

Are we sure the Packers knew when the season started? Their 38-3 shellacking at the hands of the Saints was shocking. 2020 NFL MVP Aaron Rodgers completed just 15/28 for 133 yards and 2 interceptions. The offense was only able to rush for 43 total yards and was completely overwhelmed by the Saints’ defense.

Things should be a bit easier for the Packers on Monday Night Football tonight, facing a Lions team who surrendered 41 points to the San Francisco 49ers in Week 1. But Detroit’s pesky offense almost completed a 28-point comeback to tie the game in the fourth quarter. Credit Lions head coach Dan Campbell for keeping his team motivated and engaged in a game that seemed all but over with seven minutes left in the third quarter.

Packers get back on track in Week 2

Back-to-back horrific performances from the Packers would set alarms off everywhere. However, Rodgers seems even more unlikely to perform as poorly as he did in two straight games. After that embarrassing loss, the All-Pro QB will undoubtedly have a chip on his shoulder, which is bad news for the Lions. This game seems to have avoided the injury bug as practice reports have stayed consistent throughout the week.

While a -12.5 cover from Green Bay feels a bit crazy given their performance last week, the Packers should have no problems holding at least a touchdown lead. Then again, QB Jared Goff and the Lions are out to get those backdoor covers.