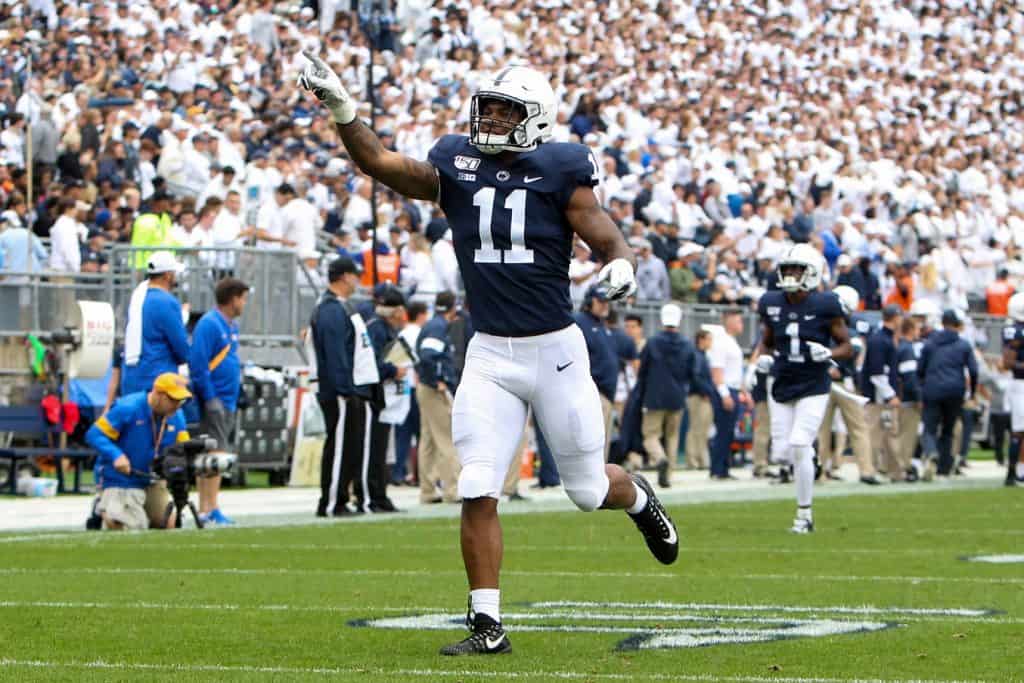 Penn State LB Micah Parsons is a very intriguing 2021 NFL Draft prospect with monster upside in his draft projection. Even though he opted out of the 2020 season, his tape with the Nittany Lions is pretty incredible. A former defensive end recently turned linebacker, you see rare pass-rush traits from Parsons compared to most linebacker prospects. But Parsons is also great in space and a high-end athletic specimen, as evidenced by the Penn State Pro Day that was just earth-shattering.

Linebackers aren’t easy to place in this draft, and we know that there will be a real run of quarterbacks going off the board early in the first round. On the other hand, players like Parsons don’t come along often. He is a killer vs. the run as a downhill or pursuit player, yet extremely comfortable playing in space.

Parsons should never leave the field at the next level and looks only to be improving as an overall player. He is going in the first round.

The Falcons currently pick No. 4 and won’t select Parsons at that spot, but they also are a strong trade-down possibility if another team gives the Falcons enough to move back. In that case, Parsons could very much be in play for Atlanta.

Heading towards the 2021 NFL season, the Atlanta Falcons’ depth chart at linebacker needs some additions. Parsons would have an opportunity to compete for a starting role alongside Deion Jones and Foyesade Oluokun as a rookie.

The Broncos could be one of those teams trying to pry the fourth overall pick away from Atlanta. But if they can’t make that happen and there isn’t a top quarterback available for Denver at No. 9, Parsons would be a fine consolation prize. Vic Fangio, more than most defensive minds, puts a premium on star every-down linebackers. Parsons could fit that bill perfectly.

The Broncos got solid contributions from Alexander Johnson and Josey Jewell last season. However, the Broncos’ depth chart at the linebacker position could certainly do with an upgrade. Parsons would have an opportunity to compete to be a starter during his rookie season.

The last time New York used a first-round pick on a true linebacker was in 1984 on Carl Banks. Clearly, this organization doesn’t put a huge premium on second-level defenders. That being said, the Giants look like they are in good shape at defensive tackle and in their secondary. A guy like Parsons could tie it all together as well as occasionally giving New York an edge pass rusher, another area of need.

With the 12th pick in the draft, the Eagles could go in several different directions, including wide receiver or cornerback. But that isn’t to imply that Philadelphia is set at linebacker, and there is a very good chance that Parsons is their highest-graded prospect at any position after the first 11 draft picks are made.

The Eagles used several unheralded players in their linebacker group this year. The Eagles’ depth chart at the position is solid but by no means outstanding. Therefore, Parsons could be a logical option to provide an immediate and long-term upgrade for Philadelphia.

The Patriots also could be looking to move up for their quarterback of the future. That might not be easy to pull off, though, and Parsons is very much a Bill Belichick-type of defender. Belichick loves huge linebackers and he loves versatile defenders. Parsons is that rare combination of both.