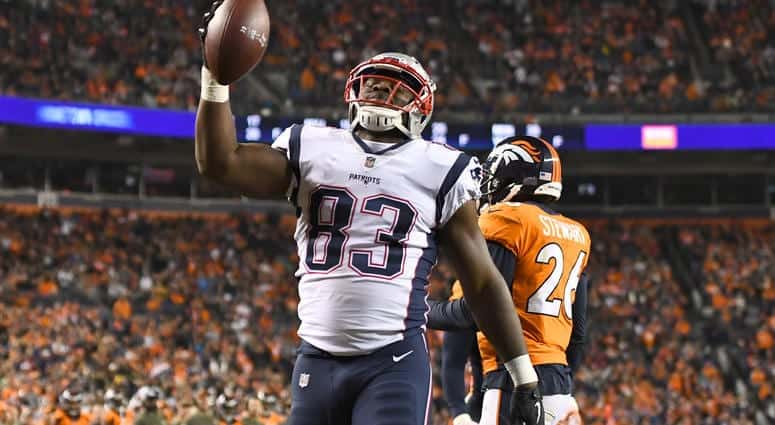 On March 9th, the Miami Dolphins inked tight end Dwayne Allen to a two-year deal worth an estimated $7 million. Despite recent additions, Miami is still trying to stabilize the position.

With the 42nd overall pick in the 2018 NFL draft, the Miami Dolphins selected tight end Mike Gesicki. Two rounds later they chose Durham Smythe, another tight end. Shortly after that then head coach Adam Gase made it known that Smythe was brought in for his blocking prowess.

As with many rookies, there’s a learning curve. Both Gesicki and Smythe were slow to produce, and an injury to veteran MarQueis Gray would force the front office’s hand. On September 20, 2018, the Miami Dolphins added tight end Nick O’Leary to the practice squad.

To say the tight end group in 2018 was underwhelming would be an overstatement. It was clear that both rookies were not as prepared for the NFL as hoped. After Gray’s injury, O’Leary’s addition would spark some immediate but short-lived revival. In the video below, I highlight the state of the Miami Dolphins tight end position. It’s tape like this that made Dwayne Allen’s deal not only possible but necessary. Make sure your volume is up for this one.

On the surface, the Dwayne Allen acquisition isn’t all that appealing. Here’s a guy that caught 13 passes in the last two seasons with the New England Patriots. However, we must consider the competition. Rob Gronkowski has dominated snaps while dominating defenses. As number two, Allen was on the field less and used for blocking for much of his opportunities.

With that said, the last video isn’t entirely fair. There’s much more happening on that single play than two tight ends failing to execute. First, there’s the penetration. Second, there’s the communication between Smythe and right tackle Ja’Waun James. In this next clip, we’ll see Allen poorly time the snap.

Even with the rough start, Allen has excellent technique in fitting into his block. He stays low, gains sufficient leverage and drives the defender. When the whistle blows, you’ll see he’s still sustaining position and control. It wasn’t a preferred start, but it ended just the way you’d draw it up.

In a means to compare him to Miami’s current tight ends, the next short video shows his down angle quickness. On this quick pitch heading left, Allen has cut-off responsibility. Based on the defensive alignment, Allen will crack the defensive end.

Despite beginning in a two-point stance, Allens’ quickness exceeds anything on the Dolphins current roster. He also remained square making him more accurate when aiming. He keeps a strong base when running which makes him more challenging for a defender to elude.

Below we’ll take a more in-depth look into what makes Allen’s signing beneficial to the Dolphins. This clip exemplifies characteristics needed from an NFL tight end. Often, players from college have not yet developed the ability to block at a high level. Make sure your audio is back on as we dissect the following video.

With an injury-depleted offensive line, the Dolphins turned to their tight end group for reinforcement. It grew evident that practice squad acquisitions and fourth-round selections were not solving the issue. Gesicki, Miami’s second round choice, was never expected to block effectively. At least not in his first season. He was drafted for his dynamic talent in the passing game.

While it takes a keen eye to pick apart the blocking woes of a football team, the passing game is more obvious. In 2018, all three of Miami’s active tight ends combined for 338 yards on 36 receptions. For perspective purposes, 22 tight ends exceeded 338 yards on their own in 2018. Seven selections after Gesicki was announced, the Philadelphia Eagles selected Dallas Goedert. In his rookie campaign, Goedert secured 33 passes for 334 yards and four touchdowns.

The Dolphins tight ends only managed one score in 2018 (O’Leary). This is at a time when tight ends are arguably the greatest red zone asset for an NFL offense. With that said, the addition of Allen doesn’t necessarily fire up an already listless fanbase. His three receptions last year are shocking considering he played for the Patriots.

Allen’s production in the passing game the last two years requires further investigation. He was plenty productive in his tenure with the Indianapolis Colts. Allen caught 126 passes for 1,451 yards and 19 touchdowns in 56 starts. From 2012-2016, Allen blocked on 54% of snaps played according to PFF. Last season in New England that percentage grew to 70%. So, remain calm and enjoy these Colts highlights.

Ultimately, Dolphins general manager Chris Grier is held responsible for the selections of Gesicki and Smythe. However, it’s his business to acquire the talent and for the coaching staff to develop it. The jury is still out on a very young group of players, but rest assured that Allen will improve Miami’s tight end room and game day production.

In this article:Dwayne Allen, Miami Dolphins