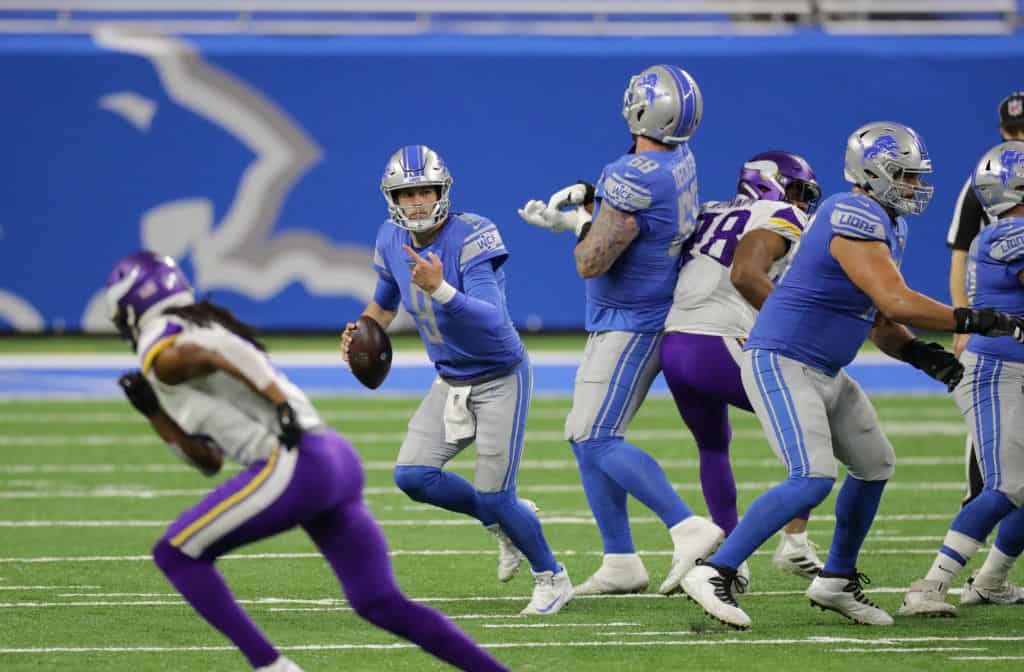 DETROIT, MICHIGAN - JANUARY 03: Matthew Stafford #9 of the Detroit Lions runs for a first down during the third quarter of the game against the Minnesota Vikings at Ford Field on January 03, 2021 in Detroit, Michigan. Minnesota defeated Detroit 37-35. (Photo by Leon Halip/Getty Images)
What's in this article? Click to show
Top Matthew Stafford landing spots and trade destinations
What might Matthew Stafford cost in terms of assets?
Potential suitors/trade partners and landing spots for Matthew Stafford
Want more NFL news and analysis?

An era has ended. According to Tom Pelissero of NFL Network, veteran quarterback Matthew Stafford and the Detroit Lions have mutually agreed to part ways ahead of the 2021 offseason, and the team will begin exploring trade options for the signal-caller. Here’s a look at Matthew Stafford’s situation, which NFL teams might be willing to trade for the quarterback, and some top landing spots.

For a while, it seemed like Matthew Stafford would spend his entire career in Detroit. Stafford broke franchise records and became the most productive quarterback in team history after his selection as the No. 1 overall pick in the 2009 NFL Draft. Yet, the perpetual dysfunction of Detroit has a way of wearing on people, and in the end, even the ever-resilient Matthew Stafford needed a change of scenery.

Stafford, who turns 33 years old in February, is coming off a season that saw him complete 339 of 528 pass attempts for 4,084 yards, 26 touchdowns, and 10 interceptions. Amidst a coaching change and inconsistency on defense, Stafford helped the Lions to five wins and managed to start every game while battling through mild injuries.

Matthew Stafford has two years left on his current contract and has $43 million due over that two-year stretch. In a vacuum, it’s a big number. However, Stafford is fairly affordable in comparison with other NFL quarterbacks. Stafford’s average annual value comes in at just 14th in the league. He will need an extension soon, but for a player who still has the ability to elevate his team when healthy, that’s an affordable price.

Health, of course, is the problem with Stafford. And it’s a problem that might not go away. Even when classified as healthy, Stafford hasn’t always been a hundred percent in recent years.

In 2019, Stafford was on pace to have a career year. However, an upper spinal injury forced him to miss the second half of the season. Nevertheless, a more stable situation might help Matthew Stafford extend his prime, and there are a few teams that could be good fits/trade partners for the productive passer.

Matthew Stafford clearly doesn’t carry as much theoretical appeal as Deshaun Watson does. However, that’s a high bar to clear. Watson is 25 years old and coming off a top-five season in a terrible Texans situation. Stafford is soon to be 33, and although his 2019 season proved that he can still be one of the league’s best quarterbacks, he’s past the halfway point of his career.

Stafford won’t quite cost three first-round picks. Having said that, he won’t be cheap, either. He’s still an upper-tier starting quarterback who has the ability to elevate those around him with his toughness, savvy, and arm talent. Teams in, or near, contention should be eager to pay for that missing piece.

There are a few indirect reference points regarding valuation. As Benjamin Allbright noted, Jamal Adams and a fourth-round pick cost two first-round picks, a third-round pick, and Bradley McDougald. Allbright reasoned that, because quarterback is more important and more age-averse, Stafford might generate value beyond that.

The Lions are in a good position with leverage. Even though they’ve shown their hand, they have a player teams will want. That demand will drive the price up. Now, it’s just a matter of deciphering who might be able to present the most compelling offer.

Kyle Shanahan has been visibly discontent with his quarterback situation in San Francisco, and it’s likely that he and Jimmy Garoppolo part ways in 2021. Shanahan desires a quarterback who can add a greater element of deep passing to the 49ers’ offense. Matthew Stafford is a player who can do that.

San Francisco also might benefit from Stafford’s ability to hit the ground running with a new team.

The 49ers have been mentioned as a team that might trade up in the draft for a quarterback — why not Matthew Stafford before the draft? However, that’s not a cheap proposition, and any rookie selected would likely need some time to acclimate to the NFL. Stafford allows the 49ers to get right back to playoff contention after a down year in 2020, and he helps them maximize their time efficiency, at a cost that likely resembles a trade up, more or less.

Cap space could be an issue for the 49ers — they only have around $12.8 million. But the cap is always flexible, and the 49ers could find a way to make room, either by extending Stafford or cutting bloated contracts.

The Patriots will need a quarterback after the Cam Newton experiment failed to gain any forward momentum in 2020.

With the 15th pick in the 2021 NFL Draft, the Patriots are out or range for a top quarterback, and Mac Jones is a reach there. New England could feasibly trade up for a signal-caller, but Bill Belichick might want to try his luck with another veteran. Stafford brings more consistency as a passer, and he could help the Patriots re-enter the postseason conversation.

Acquiring Stafford wouldn’t be cheap, but the Patriots have the draft capital and the cap space to make it happen. As it stands, New England is fourth in the league with over $50 million in space. The issue with the Patriots is their supporting cast. Stafford would currently be downgrading from the Lions’ cast by moving to New England, which is hard to do.

Nevertheless, the Patriots are a landing spot (maybe as a trade partner) that has the resources to add Matthew Stafford and a few weapons, and he’d be a good fit with Josh McDaniels.

The Washington Football Team rode a stellar defense to the playoffs in 2020. In 2021, they’re looking to build on that momentum. With a strong front seven and a developing offensive supporting cast, quarterback is one of the last pieces Washington needs for a strong top-to-bottom roster. Bringing in a veteran like Stafford would expedite the process.

Washington has enough cap space to take Stafford on, and they also have four picks on the first two days in the 2021 NFL Draft. Spending on Stafford would limit their ability to build around him. Yet, Stafford would have two familiar targets in former Lions (Logan Thomas and J.D. McKissic), and he’d also have Terry McLaurin and Antonio Gibson in his corner.

Picking at 19, Washington is out of range for a rookie quarterback, so bringing in Stafford has a lot of merit. They also just hired Martin Mayhew as general manager. Mayhew is the one who selected Stafford to the Lions back in 2009.

After Philip Rivers’ retirement, the Colts now once again need the quarterback spot. 2020 fourth-round pick Jacob Eason is the only player under contract at quarterback for Indianapolis. As much as he might’ve learned under Rivers in his first year, it’s hard to turn down an opportunity to acquire a top quarterback still in the twilight years of his prime.

Stafford would be an excellent fit in Frank Reich’s offense, and the Colts’ offensive line would also be a welcome change for a quarterback who’s been pressured regularly in his career thus far. The Colts have the third-most cap space in the league, which gives them more than enough room to take on Stafford’s contract. The real issue for them is draft capital. With the 21st pick and short-term playoff aspirations, the Colts’ first-rounders might not be as attractive as their competitors’ offers.

Those are some of the top trade candidates for Matthew Stafford, but there are other potential suitors as well. Draft placement is a big factor in this discussion, and teams out of quarterback range might be more inclined to enter the Stafford sweepstakes. There’s a lot of quarterback movement set to take place this offseason, and Stafford might be the first domino to fall.

In this article:Featured, Matthew Stafford