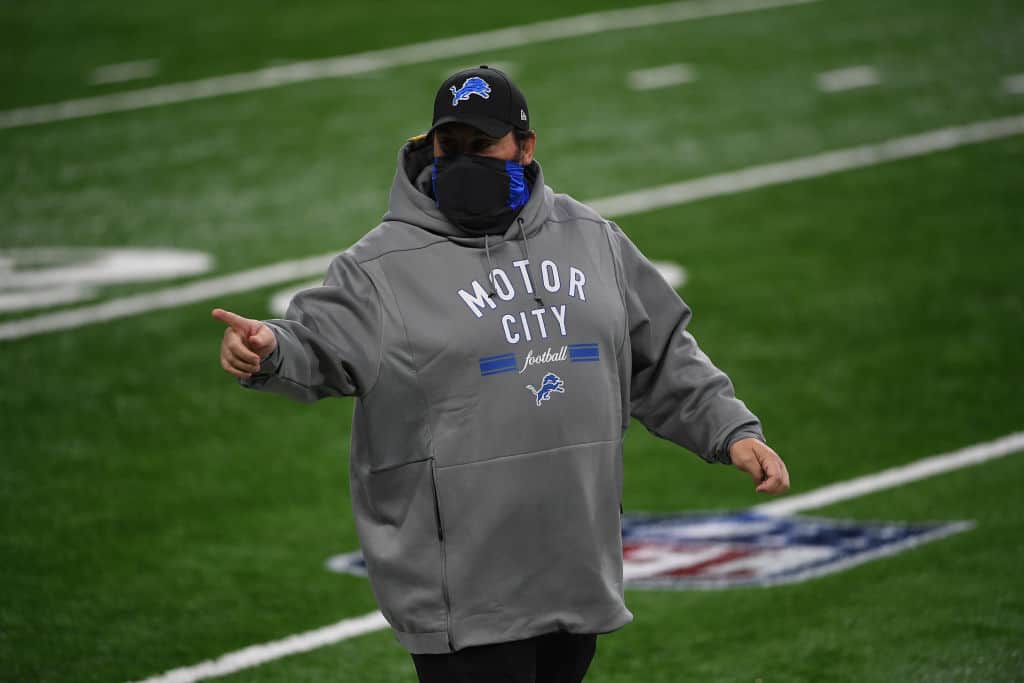 DETROIT, MICHIGAN - NOVEMBER 26: Head coach Matt Patricia of the Detroit Lions speaks to his team prior to a game against the Houston Texans at Ford Field on November 26, 2020 in Detroit, Michigan. (Photo by Nic Antaya/Getty Images)
What's in this article? Click to show
A Brief History of the Matt Patricia Era
The Matthew Stafford Situation
The Ex-Patriots Expatriates
The free agency plan for the Lions in 2021
What’s next for the Detroit Lions after firing Matt Patricia and Bob Quinn?

The Detroit Lions are in far worse shape now than they were when they hired Matt Patricia in 2018 – that’s the reality that owner Sheila Ford Hemp, team president Rod Wood, and the rest of the Lions top brass must face after firing Patricia and general manager Bob Quinn on Saturday.

Patricia and Quinn caused problems that may take years to correct. And from quarterback Matthew Stafford down through a roster full of former Patriots, creaky vets, and middling prospects, the Lions have some tough decisions to make. The Lions roster will likely look very different by the time the team is competitive again, in 2022 or beyond.

A Brief History of the Matt Patricia Era

Quinn, a long-time New England Patriots executive, became the Lions general manager in 2016. He fired head coach Jim Caldwell after back-to-back 9-7 seasons in 2016-17 and replaced him with Patricia, the flamboyant (by Patriots assistant coach standards) defensive coordinator who just gave up 41 points to Nick Foles and the Philadelphia Eagles in Super Bowl LII.

Instead of sprucing up a roster that was already good enough to compete for the playoffs, Patricia and Quinn blew up Caldwell’s team and began transforming the Lions into the Great Lakes Region’s #1 Patriots Tribute Band.

The results of Patricia’s Bill Belichick impersonation were predictable and well-documented; consult Kalyn Kahler’s Bleacher Report feature on Patricia for lots of gory details on the locker room and more. Suffice to say, it was no surprise that former Lions players like Darius Slay and A’Shawn Robinson reacted strongly and positively to Patricia’s dismissal.

Despite two years of squabbles with star players and revelatory failures (Patricia’s Lions were 0-10 against the Chicago Bears and Minnesota Vikings), Patricia and Quinn still could have saved themselves from being fired with a handful of wins against an incredibly easy mid-season 2020 schedule. But the Lions were 1-4 in their last five games, including a shutout loss to the lowly Carolina Panthers, a loss to the Texans on Thanksgiving, and their only victory was a near disaster in which they nearly allowed the Washington Football Team to come back on them.

When the Houston Texans ran away from the Lions in a humiliating 41-25 Thanksgiving romp, it was clear that the players were eager to just go through the motions and sim to the end of the 2020 season. Lions’ ownership could no longer pretend that their Belichick Buddies had a chance of turning the team around.

The next general manager and head coach of the Lions have plenty of difficult decisions to make, starting at quarterback.

Stafford is now 32 years old and in the midst of a very ordinary season. Many Lions fans insist that Stafford would be a perennial Pro Bowler and Hall of Fame candidate given better receivers, protection, coaching, and so forth, but even Stafford’s “great” seasons look pretty ordinary statistically. At some point, a quarterback becomes what he has always been. In Stafford’s case, that’s a mid-tier starter who could never quite elevate his team beyond Wild Card status and appears to be at the start of his decline.

Trading Stafford after the 2020 season would force the Lions to eat a $19-million cap hit, which could be cut in half and spread across two seasons. That’s not a prohibitive figure, and the new brain trust may decide to swallow a big wad of cap dough in what’s sure to be written off as a rebuilding year next season. After Tom Brady and Philip Rivers changed hands in 2020, anything is possible next offseason, including Stafford in a Denver Broncos or Washington uniform. (It’s hard to imagine the Lions trading him to the Bears, but who knows?)

That said, it would be shocking to see Stafford unceremoniously cut after over a decade as the Lions’ most successful quarterback since Bobby Layne, and blockbuster quarterback trades remain rare and tricky to execute. The most likely scenario for the Lions in 2021 would be to draft a potential replacement, keep Stafford for one more year, and then (assuming he doesn’t flourish under the new regime) let him go with minor consequences after next season.

The Stafford situation is just one reason why a Lions rebuild will take years: Matt Patricia and Bob Quinn squandered what should have been Stafford’s prime seasons with nothing to show for it, and they could not be bothered even tinkering with some late-round prospect or reclamation-project replacement, even though Stafford’s season-ending 2019 injury should have been a warning sign.

Defensive end Trey Flowers will cost the Lions almost $20-million in cap space. Linebacker Jamie Collins will cost them over $11-million. Defensive tackle Danny Shelton will cost them over $5-million. (Check out OverTheCap.com for more details). The Flowers and Collins contracts will be nearly impossible to adjust, meaning that the new Lions brain trust will spend at least one more year paying for the right to reminisce about the 2016-17 Patriots.

At least Collins and (when healthy) Flowers are playing well, as are former Patriots safety Duron Harmon and receiver Danny Amendola, both free agents after this season. Quinn and Patricia spackled their starting lineups with ex-Patriots whenever they could not draft or develop a better option, which was often. Quinn has scattered some fine players like offensive tackle Taylor Decker and receiver Kenny Golladay across his draft classes since 2016, but the Lions possess nothing that could be seriously classified as a “young nucleus.”

The 2020 draft class has been a real mixed bag: running back D’Andre Swift has been great when healthy, but cornerback Jeff Okudah has looked nothing like the sure thing we expected out of Ohio State, and defensive lineman Julian Okwara’s role on the team so far has been to carpool with his older brother Romeo. It’s unclear how much of the team’s inability to consistently develop young talent is Patricia’s fault and how much falls upon Quinn, though Patricia is the one calling non-stop easy-to-read man coverage for Okudah and rotating Swift with Grampy Stat Compiler.

The free agency plan for the Lions in 2021

Nothing underscores the futility of late-Matt Patricia era Lions football quite like 35-year old Adrian Peterson scoring short-yardage touchdowns in a meaningless Thanksgiving blowout loss to the Texans. The Lions are terrible, but they are also so overloaded with veterans that young players cannot really develop.

Peterson is a free agent in 2021, as are Golladay, Harmon, Amendola, Marvin Jones, Romeo Okwara, and a bunch of old-timers you probably forgot were on the Lions’ payroll. (Everson Griffen! Mohamed Sanu for some reason!).

Golladay and perhaps Okwara are the only real re-signing priorities. In fact, Golladay is such a high priority that Quinn should have taken care of him instead of, say, spending money on Peterson, Griffen, and Sanu. Just about everyone else, including useful players like Jones and Harmon, should be sent packing as the Lions strive to get younger, cheaper, and less resigned to failure.

What’s next for the Detroit Lions after firing Matt Patricia and Bob Quinn?

The 2021 roster is likely to be expensive due to Stafford, Flowers, Golladay, and some absurdly overpriced veterans (don’t make me spell Halapoulivaati Vaitai), yet sharply depleted and talent-poor due to the loss of lots of veteran buttressing. In other words, the 2021 Lions will be worse than the 2020 Lions, at least on paper, and there’s nothing the new Lions coach and general manager can do about it unless they take a foolish, short-sighted approach.

The Lions didn’t really need a rebuild when Matt Patricia arrived. Now they need complete demolition. Let’s hope they select a new coach and general manager worthy and qualified for the job.