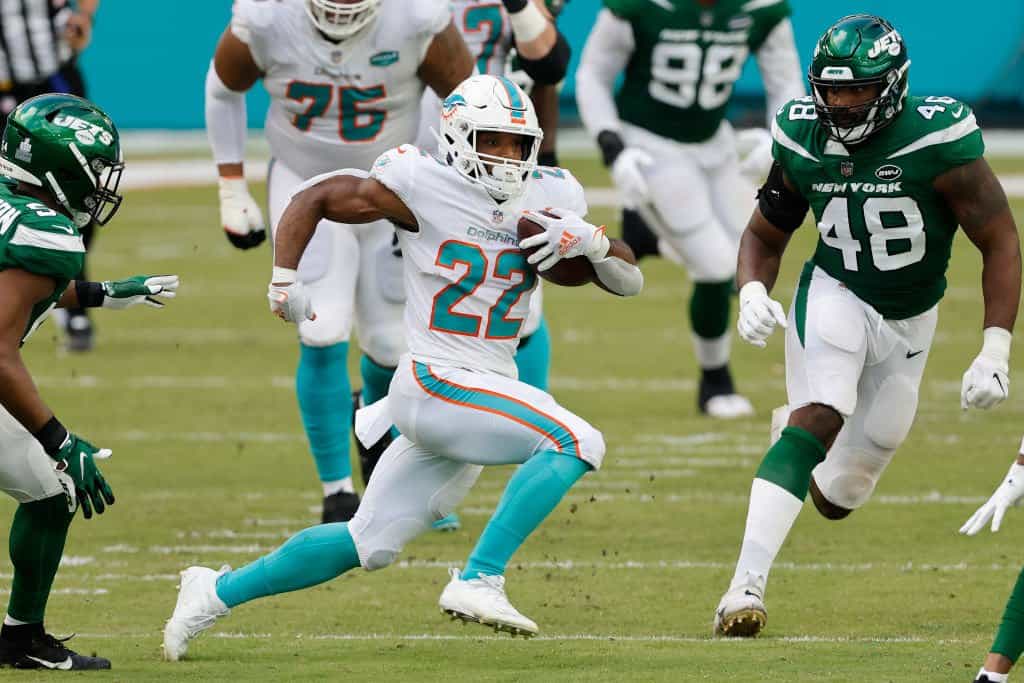 MIAMI GARDENS, FLORIDA - OCTOBER 18: Matt Breida #22 of the Miami Dolphins runs with the ball against the New York Jets at Hard Rock Stadium on October 18, 2020 in Miami Gardens, Florida. (Photo by Michael Reaves/Getty Images)
What's in this article? Click to show
Latest practice status for Matt Breida
Matt Breida has been out since Week 8 due to a hamstring injury
UDFA Salvon Ahmed has stepped up and taken a firm grasp of the starting role in Miami
What should you do in fantasy if Matt Breida is playing in Week 11?
Want more fantasy football analysis and news?

Four weeks. That is how long you have to secure your spot in the fantasy football playoffs as they quickly approach. One player that fantasy managers could use for their playoff push is Miami Dolphins RB Matt Breida but is he playing in Week 11, or will his injury keep him out another week. Having missed the last two weeks due to a hamstring injury, Breida’s return could give a boost to the odds of fantasy managers in hopes of bringing home some hardware. But first, he has to win a role in his own backfield.

Update November 22nd: According to NBC’s Ruthie Polinsky, Matt Breida is active for their game against the Denver Broncos.

Joe Schad of the Palm Beach Post reported on Wednesday that Matt Breida (hamstring) was a full participant in practice. And on Thursday, Breida was not listed on the team’s injury report. Barring a surprise setback, it appears that Breida will be ready to go on Sunday vs. the Broncos.

Dolphins RB Matt Breida has missed the last few games due to a hamstring injury he suffered in Week 8 against the Los Angeles Rams in the team’s 28-17 victory. It appeared for a while that he was going to suit up in Week 10. Breida was a limited participant in practice every day last week but was deemed inactive for their game.

But now, with Breida no longer appearing on the injury report, the Dolphins will get back part of their backfield. It has to be said, though, that it is not as if the Dolphins have missed much in terms of production with Breida out of the lineup. In his seven games, he has carried the ball 37 times for 128 yards (3.46 avg) and has caught seven of his eight targets for 79 yards but has yet to find the end zone. Matt Breida’s four PPR points per game aren’t much missed from a fantasy aspect either.

I am not one for victory laps, but anyone who knows or follows me knows that I have loved Salvon Ahmed this entire offseason. I even went so far as to say he was my favorite UDFA of the season. When he landed in San Francisco, I said he could be the team’s “next Matt Brieda.” Well, it took him going to Miami to be just that in fantasy.

Throw out the 40-yard time he ran at the NFL Combine because that was a lie. Ahmed actually holds the University of Washington record with a 4.32. For me, you could throw out the 4.62 he had in Indianapolis. Go back and watch his college tape because he is so much faster than that on the field, and you have seen that in recent games for the Dolphins.

In Week 10, undrafted rookie running back Salvon Ahmed posted a borderline RB1 performance, finishing as the RB14 in PPR leagues. He carried the ball 21 times for 85 yards and scored a touchdown while adding one catch on his only target for five yards.

Even if Matt Breida is playing this week, it is Salvon Ahmed’s backfield as far as fantasy is concerned. The real question will be what happens once Myles Gaskin returns from his stint on IR. After releasing RB Jordan Howard, it will be a competition between Gaskin and Ahmed for the touches, leaving Breida as the third-wheel.

What should you do in fantasy if Matt Breida is playing in Week 11?

Given that wins in fantasy are so crucial right now, I think you will be best served to avoid Matt Breida in fantasy. Likely floating around on waivers currently, there is nothing that he has shown so far this season to give any confidence to qualify him as a starting running back in the NFL or fantasy football.

It’s hard to guarantee that Ahmed’s reps (76%) or workload won’t decrease a bit with Matt Breida’s likely return this week, but he will not be leaped on the depth chart either. It’s not an awful matchup in Week 11, as the Denver Broncos are in the bottom-half in fantasy points given up to the running back position at 23.83. Knowing that the majority of the opportunities will go towards Ahmed, he will be in the lower-RB2 range this week. However, it is the rest of the season schedule that is enticing.

After the Broncos, the Dolphins take on the New York Jets, who rank 26th against the RB, followed by the Cincinnati Bengals at number 14 on the season. Then for the traditional playoff schedule, it is matchups against the Kansas City Chiefs (23rd), New England Patriots (17th), and Las Vegas Raiders (28th) in Week 16 for the fantasy championship.

With the uncertainty of how Myles Gaskin will look once he returns, I would spend a significant remainder of my FAAB budget on Salvon Ahmed as a player who could be the unlikeliest of heroes in 2020.

In this article:Matt Breida, Salvon Ahmed