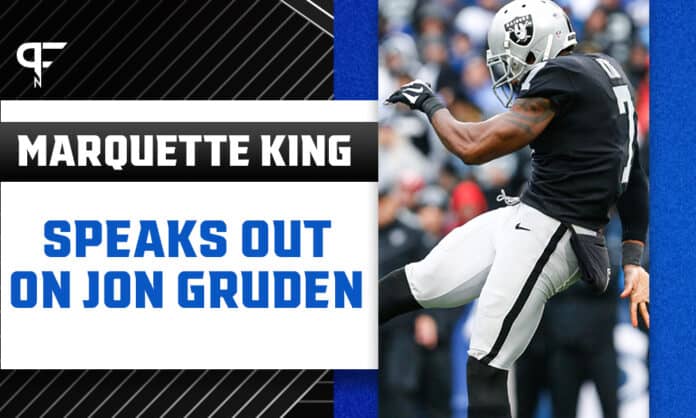 Marquette King NFL-ready, looks to build off unjust release in 2018

Following Jon Gruden's resignation, former Raiders punter Marquette King is speaking out on how Gruden and the organization treated him.

By Jon Helmkamp
October 12, 2021
What's in this article? Click to show
Marquette King was released for his performance, according to his Notice of Termination
King’s celebrations on the field were full of energy
Marquette King says he is NFL-ready and waiting for another chance

On Monday evening, Jon Gruden resigned as the head coach of the Las Vegas Raiders after a slew of past emails revealed a pattern of racist, homophobic, and derogatory language. Adding to the story was a report by Yahoo this morning that the Raiders released former punter Marquette King for his personality, not his punting.

That is directly contradictory to what King was told by the Raiders when he was released. Earlier today (Tuesday), PFN spoke with King regarding his release from the Raiders.

Marquette King was released for his performance, according to his Notice of Termination

When a player is released, they are given a Notice of Termination signed by the organization releasing them. This form provides five options that the team can select for the reason of termination. Those five options are as follows.

The option that was marked on King’s Notice of Termination on March 30, 2018, which he sent to PFN, was the third one: “In the judgement of the Club, your skill or performance has been unsatisfactory as compared with that of other players competing for positions on the Club roster.”

King was released following the 2017 NFL season that saw him average 47.4 yards per punt — sixth-best in the NFL.

“I showed up to the facility with a gift to give to [Gruden], and I got cut the same day. They shipped me out with the paper, saying my performance was unsatisfactory compared to the competition on the club. But there wasn’t another punter on the roster at the time,” King said.

King also said that he never met with Gruden, who the Raiders hired on January 5, 2018.

PFN reached out to the Raiders organization for comment but as of publishing time, they had not yet responded.

King’s celebrations on the field were full of energy

With Gruden being exposed for a history of racist comments, the optics of King — the only black punter in the NFL at the time and only the sixth in NFL history — being released for his “personality” are less than ideal.

“I’ve had multiple players from around the league that have reached out to me over the last two years tell me ‘we know what’s really going on here’,” King said.

You certainly can’t blame it on his production, which Gruden and the Raiders attempted to do with his release designation. But if it’s not production, then what is it?

Personality and passion are two things that should be viewed as a value, not a deterrent. According to King, multiple people throughout the organization valued what he brought to the game.

“The people upstairs would come to me during the games and ask me to make a play and get the team hyped, and I was like ‘shoot, okay’,” King said.

During his time in the NFL, King was capable of making plays that had the potential to swing the momentum any matchup. And he did so numerous times in Oakland with charisma and swagger.

“It was just me being myself,” King said. “I’ve always been the type to celebrate. We stay at the facility all day, and you work so hard to accomplish a certain goal in the game and contribute to the team, and when it happens in a game, where it really makes a difference, and it really matters — it’s just a really good feeling.

“I’ve always celebrated, even in 2012 in my first game. Some coaches and teams probably didn’t like it, but at the same time, we’re playing a kid’s game. I feel like to play the game, you should enjoy it. You should enjoy your job.”

As has been the case for the last two years, King still has NFL aspirations and is trying to find his way back into the league. He spent a season with the XFL St. Louis BattleHawks, where he described his time as helping him regain his love for the game.

“No doubt,” King said when I asked if he was still trying to get back into the NFL.

But he hasn’t been given the chance.

“I didn’t get any workouts over the summer, which is still very odd to me, man. If it’s a ‘performance-based business’, you’d think I’d have a chance.”

“I’m ready to go. I could play in the NFL right now, and I know that I’d be a top punter,” King said.

Jon Helmkamp is a fantasy football and NFL contributor for Pro Football Network. You can find him on Twitter: @JonHelmkamp.