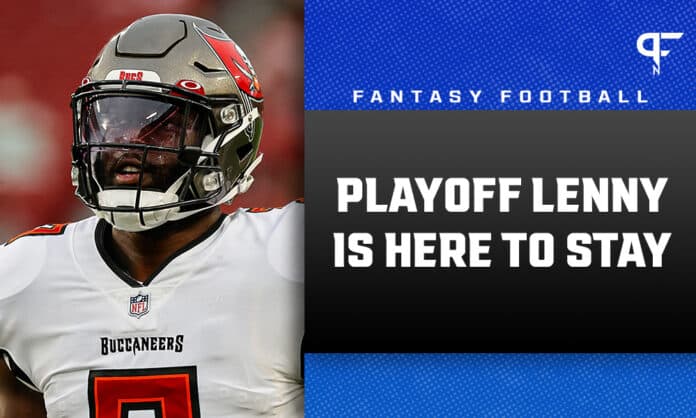 If you're asking whether Leonard Fournette is a good fantasy football option this week, then you clearly haven't been paying attention.

Leonard Fournette’s fantasy football journey has been a wild ride over the last few years. He was a top-10 RB as a rookie in 2017, but he’s seen his ADP drop year over year. Heading into the 2021 season, his ADP was 79 overall (RB33). But that was six weeks ago. Nowadays, Fournette looks more like an every-week starter. Should you trust him on Thursday night, though?

It’s always tough trying to predict what will happen on a week-to-week basis. It’s especially hard to do so for Thursday night, where the teams have less rest and prep time than usual. Nevertheless, I find that the best way to try to predict the future is to study the past, and Fournette’s past is interesting.

This shouldn’t come as a surprise, but Fournette was just mediocre last year. He wasn’t winning anyone’s fantasy championships as the season finished up, and a lot of people were calling him washed. All that changed when the Tampa Bay Buccaneers got into the playoffs. Then, “Playoff Lenny” came to life and dominated the postseason.

Fournette scored a meager 132 PPR points during the regular season, good enough for RB35 on the year. He played in 13 games, scored 6 touchdowns, and racked up 367 yards on 97 carries (3.8 yards per carry). He also caught 36 of 47 targets for another 233 yards — nothing too tremendous, especially for fantasy where stats are king. But once the games mattered for his team, Lenny turned it on.

Through four playoff games, Fournette scored 4 touchdowns and racked up 300 yards on 64 carries (4.7 yards per carry). He added 148 yards on 18 catches and another touchdown through the air. He was on fire as the Bucs ran through everyone in their path to take home the Lombardi Trophy. Fournette definitely shined, but was this an indication of his true running back self, or was it all a mirage?

The first three weeks of the 2021 season definitely left some questions unanswered. Through three weeks, Fournette only had 24 carries for 92 yards (3.8 yards per carry). Lucky for him, teammate Ronald Jones only had 52 yards on 15 carries (3.5 ypc), so neither player was really getting the job done on the ground.

However, Fournette was much more involved in the passing game. In those same three games, he saw 14 targets, catching 12 of them for 77 yards. In those three weeks, Fournette scored 10.9, 11.6, and 6.4 PPR points, respectively. Not too bad for a flex play but not really worthy of an RB2 spot yet.

In addition to his receiving work being so high, Fournette was doing better on the ground than his teammates. If you looked outside the box score and watched him play, your eyes showed that he was the better runner. The writing was on the wall: Fournette should be the true bell-cow back in Tampa, and in Week 4, he proved everyone right.

In Week 4 against New England, Fournette went off for 92 yards on 20 carries. He added 3 catches on 5 targets for another 43 yards. While he didn’t find the end zone, he still scored 16.9 PPR fantasy points that week. This put him at RB14 for the week and made fantasy managers happy.

Fournette followed that up with another great performance in Week 5 against the Dolphins. He ran 12 times for 67 yards and caught 4 of 5 targets for another 43 yards. He also scored his first touchdown of the year. Fournette scored 21 PPR points in Week 5, good enough for RB14 once again.

By comparison, Jones has been quiet. He scored a touchdown in Week 4 that helped him score 8.5 PPR points that week, but he finished with just 3.6 points in Week 5. Based on the stats alone, it’s finally clear — this backfield belongs to Fournette.

Fournette faces the Eagles in Week 6

Let’s take what we’ve seen and apply it to this week’s matchup between the Bucs and the Eagles. Through five games, no defense has had more rushing attempts against them than the Eagles. They’ve had 167 total runs to defend, 33.4 per game. This bodes well for the Bucs’ overall potential rushing production tonight and for Fournette’s volume as the team’s leading rusher.

In terms of yards, the Eagles’ defense is third in the league, allowing 710 total rushing yards. This comes out to 142 yards per game, which is more than the 82 per game the Bucs have averaged as a team this year.

In Week 5, Bucs QB Tom Brady injured the thumb on his throwing hand in the first half. He wrapped it up and went back in the game to throw for a total of 411 yards and 5 touchdowns in their win against the Dolphins. While he played well, Brady and the Bucs might decide to lean more on the rushing game this week to let his thumb heal. This bodes well for Fournette’s potential opportunity as the leading ball carrier.

I think you see where I’m going. Fournette is the clear leading rusher on a team that should run the ball more than average against a team that allows the most runs in the NFL. All signs point to Fournette being a worthy fantasy starter tonight. Just make sure he’s in your RB2 slot and not your flex. Not only is that a smart fantasy play, but he’s also earned the title as the true RB2 on your team.