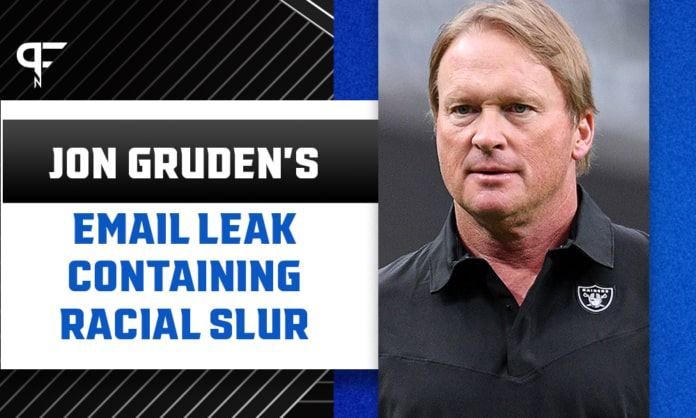 By Adam H. Beasley
October 11, 2021
What's in this article? Click to show
Update: Jon Gruden resigns as Raiders Head Coach
NFL condemned Jon Gruden’s racist email several days ago
Gruden took accountability for email
What is next for the Raiders?

9:10 PM ET Update [October 11]: Amid a report from the New York Times that detailed very disturbing emails from Gruden, the longtime NFL head coach announced his resignation on Monday. “I love the Raiders and do not want to be a distraction,” Gruden said. “Thank you to all the players, coaches, staff, and fans of Raider Nation. I’m sorry, I never meant to hurt anyone.”

This shocking development comes after the Times published a story that detailed vulgar and disgusting words used by Gruden in emails during his time while at ESPN as their color analyst for Monday Night Football.

The obtained emails included such words as: Gruden called the league’s commissioner, Roger Goodell, a “f—–t” and a “clueless anti football p—y” and said that Goodell should not have pressured Jeff Fisher, then the coach of the Rams, to draft “qu—s,” a reference to Michael Sam, a gay player chosen by the team in 2014.

It made the fact that he used racist language to describe NFLPA executive director DeMaurice Smith look obviously even worse. As Gruden awaited word from the league about potential punishment for that, the Times published their bombshell story, leading to Gruden’s resignation.

Despite his lofty job security — thanks to a 10-year contract that had over $50 million on the book — Gruden is officially out in Vegas.

“The email from Jon Gruden denigrating DeMaurice Smith is appalling, abhorrent and wholly contrary to the NFL’s values,” the NFL said in a statement obtained by Pro Football Network. “We condemn the statement and regret any harm that its publication may inflict on Mr. Smith or anyone else.”

The Wall Street Journal first reported the racist email, which was uncovered during the review of workplace misconduct at the Washington Football Team that was completed this summer.

The league did not identify the WFT employee who received the email sent during the 2011 lockout. Smith was the union’s lead negotiator with the league, and Gruden, who was in the Monday Night Football booth at the time, viewed him as a “villain” in the labor dispute.

Gruden told The Athletic Friday that he didn’t remember sending the email in question but did not dispute its authenticity.

Jon Gruden discussed the article with his players this morning. Here are his comments to me on the offensive email: pic.twitter.com/7gkNd5Rzzs

“I certainly will take accountability for it,” Gruden said, adding he was venting to a friend at the time.

“I know at the time the Collective Bargaining Agreement was changing, there was a lockout, going on or the threat of a lockout if I can remember. I probably looked at De as the villain. And I was really upset. I was really upset there was going to be a lockout. I felt that Gene Upshaw would have never let that happen.”

“I didn’t feel like we were getting the truth. I refer to guys when I see them lying — and I can tell they’re lying — I refer to them as ‘rubber lips.’ I went too far in calling him the Michelin lips. I never had a blade of racism in me. I was just pissed, and I used a terrible way to insult a guy.”

“I called De. I have reached out to him, and I haven’t heard back from him yet. But I will continue to try.”

What is next for the Raiders?

Gruden was facing repercussions for his offensive language in three ways. The league could have suspended and/or fined him, and it’s our understanding the NFL shared the emails pertaining to Gruden with his bosses. Secondly, the Raiders had the option to terminate him. And then there’s the matter of anger from his locker room, which could conceivably turn on him.

After the New York Times report, there was nothing else to do for Gruden except resign. According to several media reports, Gruden had already left the facility on Monday evening.

“The content of an email regarding DeMaurice Smith from Jon Gruden when he worked for ESPN 10 years ago is disturbing and not what the Raiders stand for,” the team said in a statement last week. “We were first made aware of the email late yesterday by a reporter and are reviewing it along with other materials provided to us today by the NFL. We are addressing the matter with Coach Gruden and will have no further comment at this time.”

Given the NFL’s recent commitment to social justice, plus NFL teams’ perceived blacklisting of Colin Kaepernick over his decision to kneel during the national anthem, it would have been hard for the league and the Raiders to do nothing. As we saw, Friday afternoon’s denunciation of one of the league’s most famous personalities was just the beginning. And on Monday, we saw the end.