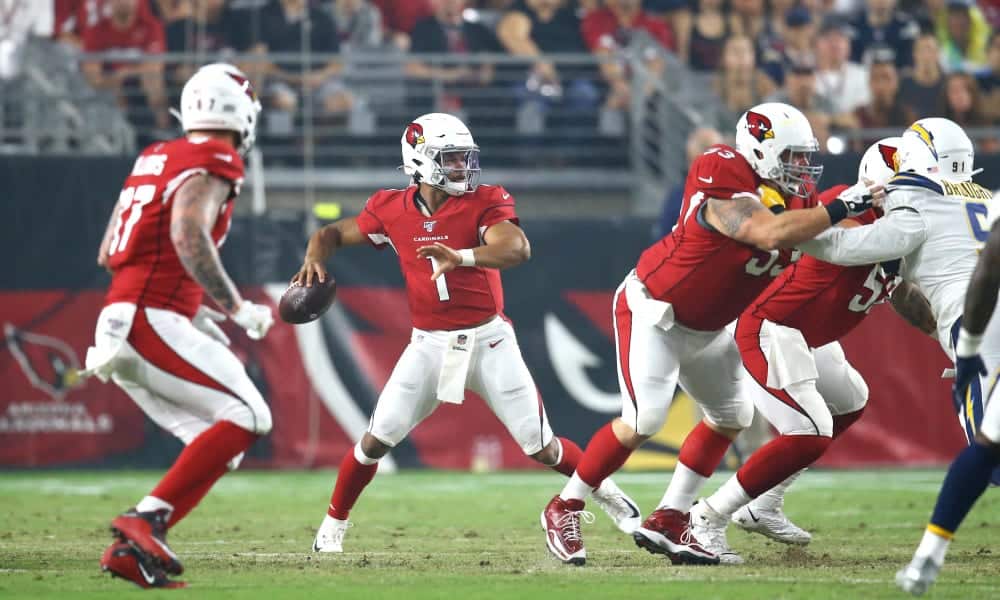 As the number one overall pick in the 2019 NFL Draft by way of the Arizona Cardinals, Kyler Murray came into the 2019 NFL season with high expectations. In his final season at Oklahoma, Murray had amazed and astounded the college football world with a unique skill set that combined running speed with throwing ability. Heading into the Cardinals Week 16 clash with the Seattle Seahawks, how has Murray progressed in his first year as an NFL quarterback?

Week 4 woes against the Seahawks

The Seahawks game provides an excellent baseline to analyze Murray’s progression. As AFC West division rivals, the two teams faced off against each other in Week 4 of the 2019 NFL season. Seattle traveled to the desert and emerged victorious as Russell Wilson threw for 240 yards in a 27-10 win. Murray threw an interception for a pick-six in the defeat.

As a headline statistic, a pick-six and a defeat are fairly damning.

However, using Pro Football Network’s Offensive Share Metric and NFL Next Gen Stats, we can see what went wrong for Murray in that game.

The Week 4 defeat to Seattle was one of Murray’s worst games in his rookie year based on his OSM grade of 6.50. Any grade from 0-10 is defined as poor, and detrimental to the team’s offensive production.

This is especially damning when you consider that Larry Fitzgerald was the number one wide receiver by OSM grade, with an elite 56.62. Christian Kirk, in his second year with the Cardinals, had an excellent grade of 37.41. Both wide receivers did the best they could with the opportunities that they were given. However, between the play calling of Kliff Kingsbury, and the play of Murray, neither factored enough in the game.

Kingsbury took a very conservative approach to how he used Murray in the first Seahawks matchup. They relied on short throws to running back David Johnson, with the emphasis on him to make big plays. Murray had the fifth-lowest completed average air yards in Week 4 with just 3.1 per play.

Despite making simple short throws, he also had one of the lowest expected completion percentage differentials. Next Gen Stats predicts the probability of a completion based on numerous factors. Murray’s actual completions were 4.4% lower than Russell Wilson, who completed 14.8% more of his pass attempts.

Finally, Murray held on to the ball too long, taking too much time to throw. His 2.98 second release time was the fifth slowest in the league, which is okay if you’re allowing a play to develop downfield, like Patrick Mahomes, for example. As a result, Murray took four sacks.

Murray’s progress began almost immediately in his next game, as he led the Cardinals to a 26-23 win over the Cincinnati Bengals. Be under no illusion; I’m not comparing the Bengals to the Seahawks here. However, there were definite signs of progression in Murray’s game.
This is reflected in his OSM grade of 36.09, his highest grade of the season so far. He also led all Cardinals players in OSM grade, truly detailing how responsible for the offensive production Murray was.

He threw for 253 passing yards while adding 93 yards and a touchdown on the ground.

OSM doesn’t incorporate rushing data into a quarterback’s score, therefore, giving a clearer picture of what Murray did with the ball in his hand.

Compared to the game against Seattle, Murray got the ball out of his hands a lot quicker. Whereas previously he’d been the fifth slowest, against the Bengals, he was the third quickest in the NFL. As a result, he only took one sack.

Murray was also more aggressive in finding his receivers than in the previous game. Next Gen Stats determines aggressive throws as being into a tight window where a receiver has a defender within a yard or less at the time of reception. Murray’s aggression percentage against Seattle had been 3.1%. Against the Bengals, it was 18.8%.

As you’d expect from a rookie in the NFL, Murray’s progression and performance from there has had its highs and lows. He followed up the performance against the Bengals by leading the Cardinals to a win over the Atlanta Falcons with an OSM grade of 28.78.

A good indicator of his progression can be found by looking at the two games against the San Francisco 49ers.

In the first game, Murray received an OSM grade of 7.83 as the Cardinals lost 28-25. As in the first game against Seattle, Murray wasn’t aggressive in his throws with an average of 2.3 completed air yards average per throw. He was inaccurate as well, with a -6.2% completion percentage differential.

Although the Cardinals couldn’t turn around the result two weeks later, Murray showed progression with a 14.93 OSM grade. He was more aggressive, had a higher completed air yards average, and a completion percentage above expectation.

Murray comes into the Cardinals Week 16 clash against the Seahawks on the back of one of his best performances of his rookie season. He led Arizona to a 38-24 win over the Cleveland Browns. Although the box score will say that Kenyan Drake had four touchdowns, all but one came on short-yardage runs.

Murray’s OSM grade of 26.46 was good enough for the 11th ranked quarterback. As in the second game against the 49ers, his intended air yards were higher than in the early season games, and his completion percentage was above expectations.

Drake’s impact on the Cardinals offense, and Murray’s production, highlights an important factor in the Cardinals’ Week 16 matchup against the Seahawks.

When the Cardinals can run the ball, it allows Murray to shine. Would Lamar Jackson be as successful running from the quarterback position without the ground threat established by Mark Ingram? The Seahawks have the third-best rushing attack by yardage in the league, and that has allowed Wilson to put himself in the MVP conversation once again. Jameis Winston leads the league in passing yards, but a lack of a ground game has hindered the former first overall pick.

In the win over the Bengals, the Cardinals had 248 rushing yards, which allowed for a balanced offense. Drake’s 137 yards against the Browns did the same.

The problem for the Cardinals in the 2019 NFL season is that they’ve largely been unable to run the ball successfully.

Johnson has been extremely disappointing and ranks near the bottom of our OSM running back rankings. As a result, Murray is currently the Cardinals leading rusher with 504 rushing yards. He makes up nearly a third of their total rushing yards.

That would be a real sign of progress for Murray.