Trey Lance is a gifted passer and runner, but he's inexperienced. The young QB has only started in 19 football games since 2018.

Trey Lance and Kyle Shanahan have a lot of expectations weighing them down. The San Francisco 49ers finished 10-7 last season and made an incredible run to the NFC Conference Championship. Last season, the offense ranked sixth in EPA per play, with Jimmy Garoppolo under center for 15 games. Now, they have the same expectations with a quarterback who has played in just 19 games since 2018.

Lance and Patrick Mahomes share similarities. And before anybody gets their jimmies rustled, think about it. Lance is heading into a situation with enormous expectations. He’s an athletic quarterback with a howitzer of an arm who was continuously picked apart before the NFL draft.

Both Lance and Mahomes were able to sit behind the starter on a playoff team in Year 1. And both quarterbacks share the luxury of playing under a coach that many consider two of the best minds in the league. Lance will also benefit from being surrounded by weapons on offense, including an All-Pro-caliber tight end in George Kittle, when healthy.

But Shanahan and the 49ers were always the best landing spot for Lance to land softly at the NFL level, and that holds a year later.

In 2021, nobody ran more 21 personnel than the 49ers. Their 34% clip was 11% higher than the New England Patriots, who finished second in that personnel usage. The volume of two-back variations is incredible when one takes a dive into Shanahan’s installs over the years.

And the best part about that is how it matches the 49ers’ talent. Kyle Juszczyk is unique to the modern NFL game. And he’s the chess piece that puts the training wheels on Lance.

Lance’s North Dakota State offense was hilariously dubbed an “NFL offense,” when in reality, it was an old-school offense that ran a ton of two-back and heavy personnel sets that sprinkled in the spread. Most NFL teams run 11 personnel for more than 60% of their offensive snaps, spreading out when they do.

For having a QB drafted third in the 2021 NFL Draft, NDSU’s offense ran the ball at an obnoxious rate. Their heavy personnel usage meant that defenses also remained in base often. And when that’s paired against tight 21 or 12-personnel formations, that limits the coverages a QB sees.

In the NFL, teams that aren’t used to running base defensive personnel packages are forced into it against San Francisco. In case you didn’t know, most NFL linebackers struggle against tight ends and backs in coverage.

When San Francisco comes out in their base “Off, Edge, or #’s” variations of their two-back sets, it will clean up the looks Lance receives in coverage because the receivers’ spacing generates so much empty space compared to the formation.

Spreading out to create mismatches

If teams try to defend the 49ers with lighter personnel groupings against their 12-personnel sets, they’ll shove the run game right down the throat of the defense. This is especially relevant now that they have a 230-pound quarterback who is also a threat on the ground.

It shouldn’t be surprising to see San Francisco teeter around the top of the league in rushing efficiency in 2022.

Shanahan will play with individual matchups if the defense tries to defend the 49ers with base defensive personnel. All of San Francisco’s formations are flexible. Juszczyk can and will replace the F from 11-personnel sets often.

The personnel advantage is also massive for the 49ers in the screen game. It forces linebackers into space where defensive backs would typically live. Money should be on Brandon Aiyuk and Deebo Samuel to make them miss in the open field.

The rushing attack will be key

Shanahan teams are revered for their ability to run efficiently, with very few assets thrown at the running back position. However, the team has spent third-round picks on an RB in the past two seasons. Neither appears to be a great fit for how Shanahan likes to attack.

That could mean that Trey Sermon and Tyrion Davis-Price were poor picks, or it could mean that the rushing attack is going to see a bit of a makeover with Trey Lance under center (or in shotgun, more likely).

Sermon and Davis-Price aren’t the usually speedy outside-zone runners we think of for Shanahan’s system. However, the run game will look a bit different because of Lance’s own rushing ability.

The zone-rushing attack we’re accustomed to will show far more power than before. There were many down blocks, pulling guards, and leads by Juszczyk against the Cardinals. While the zone read will undoubtedly make appearances, power and counter reads will make more appearances. Additionally, the backs will need to block for their new QB, and the bigger, more physical ones should be better at that — in theory.

The beauty of a mad consumer with the information they aren’t supposed to have is that when something like NFL Game Pass isn’t getting the film out to its well-paying consumers, the consumer retaliates by releasing private information to the internet for the rest of us to benefit from.

Shanahan’s installs are all over the internet, dating back to his days in Washington. And here, it can help describe why this will be important for Lance. 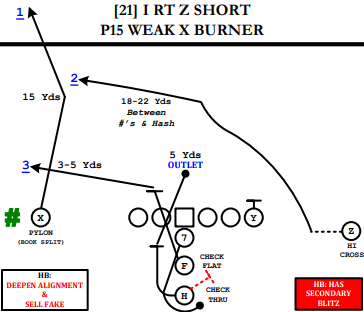 Take the above call, for example. The defense will likely be in base personnel, meaning three linebackers on the field. If it’s not, and we’re looking at a 1st-and-10, Lance would probably check to a run.

The 49ers will probably get a one-high safety look, which won’t always limit but usually will limit the coverages used defensively.

Against Cover 3, the cornerback is responsible for the deep third and will most likely carry the X vertically. However, the inside release is meant to also influence the safety, because if he doesn’t, the middle-of-field defender can jump on the crossing route of the Z, matching the two deep routes with the cornerback and safety.

If the cornerback passes that route off to the safety, he can sit on or drive to the crossing pattern. Still, the safety will be in a bind because he’s got an entire hash to cover on the burner route, and Lance could easily lead the receiver toward the sideline where the safety will struggle to have the range to defend. 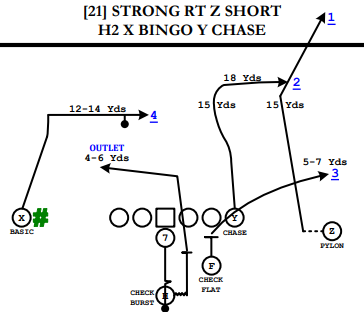 Nothing can get this old washed-up high school quarterback more hot and bothered than a good levels concept. This is a beautiful high-to-low read, and the seven-man protection off play action really lets this develop and makes it difficult to defend.

Keeping the read to one side of the field takes a lot off Lance’s plate. He’s still getting used to the speed of the NFL, and that showed itself in some skittish tendencies in the pocket as a rookie. Keeping his feet, eyes, and midsection relatively static on high-low reads like this levels concept should keep his mechanics synchronized, keeping his accuracy in check. 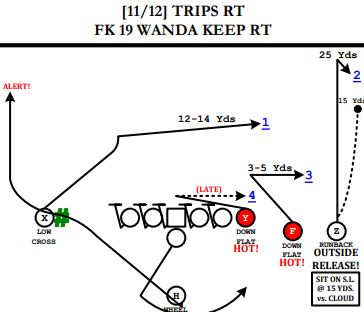 The movement game will also be important. First, it gets Lance outside of the pocket and away from the mosh pit. That allows him a clearer picture of the coverage with little to no visual noise immediately in front of him.

Second, it adds a layer of danger for the defense because Lance is a gifted athlete. The defense can do its job in coverage perfectly, but if that near-side edge defender gets washed inside, Lance will scoot for some free yards on the ground.

Third, Lance throws absolute missiles. Sometimes defenses fall asleep on the backside. Movement can cause coverage to flow, especially when everything seems to be flowing to the side of the QBs movement. Lance has the arm to set and fire across the field to a wide-open running back.

We don’t know how things will unfold in San Francisco this season offensively. Early at times, things may look disjointed at times with Lance. He’ll need to grow under live fire. And with everything we’ve heard about the young man as a person and as a potential leader, he should receive the benefit of the doubt that those early lumps will be lessons learned.

Until he gets comfortable in the traditional five and seven-step dropback game, there are ways that Shanahan can take advantage of personnel, formation, and Lance’s own physical abilities to overstress opposing defenses.

Deshaun Watson suspension: Can the Browns still make the playoffs in 2022?