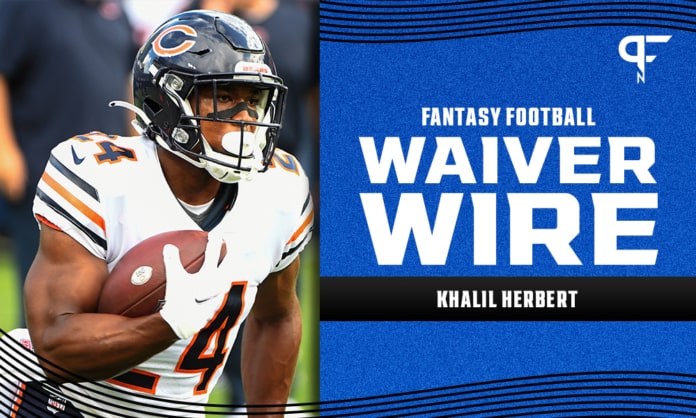 After splitting time with Damien Williams in the Bears' Week 5 win over the Raiders, is Khalil Herbert a top RB waiver wire add for Week 6?

By Eric Frosbutter
October 12, 2021
What's in this article? Click to show
Khalil Herbert out-rushes Damien Williams in Week 5
Volume is king
Is Herbert worth adding off the waiver wire in Week 6?
Herbert is not my first choice at RB

It was widely assumed that Williams would take over bell-cow duties following Montgomery’s injury. Week 5 showed us that will not be the case. Herbert — the sixth-round rookie out of Virginia Tech — played a massive role for the Bears in their important win over the Raiders.

Herbert rushed 18 times for 75 yards. Williams, meanwhile, rushed 16 times for 64 yards and a touchdown, adding 2 receptions as well for 20 yards. In terms of snap counts, Herbert saw 53% of the Bears’ offensive snaps, while Williams was on the field 48% of the time.

It doesn’t get much more even than that.

There was nothing even about the two players, however, in terms of fantasy production. Williams was the one who found the end zone and added a couple of receptions for a slight increase in PPR formats. With 15.4 fantasy points (half-PPR), Williams finished the day as a low-end RB2 (RB20 overall).

Herbert, meanwhile, had only the 75 yards on the ground and was not targeted in the passing game. He finished outside RB3 territory (RB38) as a result.

Volume is king, however, when it comes to fantasy football — particularly when it comes to running backs. So while it was not an appealing day for fantasy, the important thing to take away from Herbert’s performance on Sunday is his 18 carries.

While it is the smallest of sample sizes, 18 rushing attempts is nothing to overlook. For context, only four running backs currently average 18+ attempts on the ground. And while it’s anyone’s guess as to how head coach Matt Nagy will call a game, one thing is clear – the Bears will run the ball.

Surely, if a wide receiver saw 28% of a team’s target share, he’d be a top waiver wire add in fantasy if available. But should Herbert be a top fantasy pickup for Week 6?

Is Herbert worth adding off the waiver wire in Week 6?

It depends, frankly. For those in smaller leagues (8-10 teams), you can probably fade Herbert unless you’re really hurting at RB. On the contrary, for those in deeper leagues with limited options available, a claim with considerable FAAB put down could be a wise move. After all, the Bears are a run-first team, and if last week was any indication, Herbert will see a ton of volume in Week 6.

It’s important to note, however, that Herbert is a short-term solution. Once Montgomery returns, it’s fair to assume he’ll return to his bell-cow role. Furthermore, the Bears’ schedule for the next three games doesn’t exactly scream fantasy production.

In between the Packers and 49ers (both middle-of-the-road defenses against RBs), the Bears will play at Tampa Bay in Week 7. While the Buccaneers are giving up 18.6 fantasy points per game to running backs (11th-most), the majority of that is coming in the receiving game. Given that Herbert was not targeted at all last week and only had 34 receptions in five seasons of college football, it’s unlikely he finds production through the air.

Herbert is not my first choice at RB

Although Herbert’s volume in Week 5 should be on every fantasy manager’s radar, he’s not my first choice of waiver wire pickups this week. He’s not even my second choice, for that matter.

Darrel Williams and Devontae Booker should be fantasy managers’ top priorities at RB heading into Week 6 of the 2021 NFL season. With injuries to Clyde Edwards-Helaire and Saquon Barkley, both players look poised to enter the week as the lead back for their respective teams.

Assuming a typical 12-team league format, I might be willing to gamble when it comes to Herbert — if I can afford to. What I mean is that instead of putting a claim in on Herbert and using top priority and/or FAAB to acquire him, I may look to scoop him up once waivers have been processed.

This is not a strategy I normally suggest, simply because it’s not typically feasible when it comes to running backs. However, I project the majority of attention will go to adding Williams and Booker this week.

Therefore, Herbert could fall through the cracks and go unclaimed. If that’s the case, I’ll happily scoop him up as a free agent. Otherwise, I’m only looking to add Herbert off the waiver wire in a pinch.