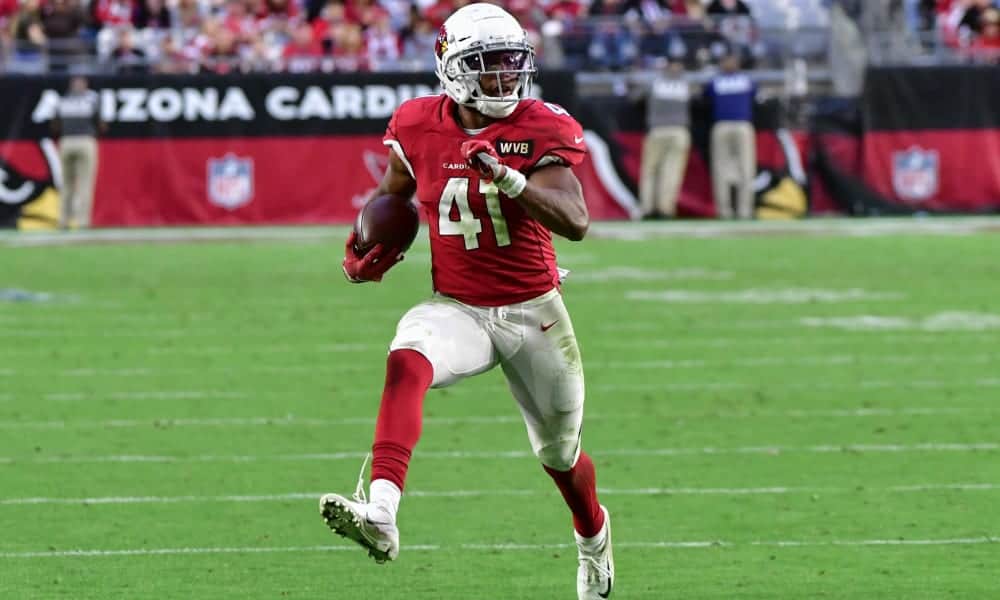 In October 2019, Kenyan Drake was traded from the Miami Dolphins to the Arizona Cardinals for a conditional sixth-round draft pick. What no one, save for perhaps Kliff Kingsbury at the time, could have predicted, was that Drake would emerge as a key piece to the Cardinals plans moving forward, averaging 5.2 yards per carry. Now, Drake’s rushing prop has opened at 1,050.5 for 2020.

There wasn’t much made about the trade at the time, considering the Dolphins were in the process of shipping out players who didn’t fit their new regime while accumulating more draft capital. The Cardinals, meanwhile, needed some running back depth with both David Johnson and Chase Edmonds dealing with injuries.

After a breakout season, the question now becomes can Drake sustain this type of production over the course of a full season. If he can, the Drake rushing prop of 1,050.5 yards in 2020 should be there for the taking.

On this week’s episode of Against the Spread, myself and fellow hosts Ryan Gosling and George Templeton broke down the NFC West. We went into detail analyzing both the Cardinals and more specifically their offensive potential. Make sure to check out the entire episode below.

Kenyan Drake was always known as a shifty, agile running back with above-average speed and a propensity to break long runs. That said, he was never a feature back in Miami or even with the Crimson Tide for that matter. One of the knocks on Drake with the Dolphins was that he danced too much in the backfield and may have left yards on the field while looking to burst into the secondary and beyond.

While the Miami Miracle played on a loop in the minds of Dolphin fans, two consecutive coaching staff appeared to believe Miami was better served with Drake in a more limited role. To that point, Drake only averaged eight carries for the Dolphins over the first half of the 2019 season, prior to getting traded.

Once arriving in the Copper State, Drake made his presence felt immediately, gashing the vaunted San Francisco 49ers defense for 110 yards on 15 carries on Halloween night. David Johnson almost immediately became a $39 million afterthought while Drake racked up 643 rushing yards for the Cardinals over the final eight games of the regular season. He never saw fewer than 10 rushing attempts the remainder of the season after rarely seeing double-digit carries in Miami.

While opportunity and overall workload are obvious correlation points for Drake’s success in Arizona, it’s important to analyze “how” he was used within the offense as opposed to simply “how often” when trying to decide if his 2020 rushing prop is worth taking a stab at.

At first glance, it appears as though Drake went from running behind one poor offensive line in Miami to another in Arizona. However, while the Dolphins had the worst overall rushing stats in the entire NFL last season, the Cardinals’ offensive line troubles were predominantly based in pass protection. Kingsbury’s scheme actually ranked towards the top of the league in terms of explosive rushing offense, as evidence by several long TD runs for Drake in the final few weeks of the season against Cleveland and Seattle.

The aforementioned offensive line of the Cardinals should improve based on continuity of the system alone, but they also added first-round talent, Josh Jones, out of Houston in the third round of the NFL Draft. The addition of DeAndre Hopkins provides a huge weapon for second-year quarterback Kyler Murray who could be poised for a breakout sophomore season himself. There will be no stacking of the box against Arizona this season with the dual-threat ability of Murray under center.

The one area the Cardinals did not address in the off-season is at the running back position. In fact, the Cardinals shipped Johnson to Houston, and Drake now has an even tighter stranglehold on the carries in Arizona.

As we begin to try to gauge just how many rushing yards are within reason for Drake in 2020 as the featured back in Arizona, we need to peek at how difficult the schedule may or may not be in terms of their opponent’s propensity to stop the run. You might hear folks in the mainstream media mention that the Cardinals have one of the tougher schedules in the NFL, but that can be misleading.

After opening on the road against the NFC Champion 49ers in San Francisco, the Cardinals return home for two games they’ll likely be favored in against the Washington Redskins and Detroit Lions respectively. They then travel to Carolina to face the Panthers in Week 4 before meeting the Jets in the Meadowlands in Week 5.

The one glaring weakness in the San Francisco defense is stopping the run, and they are now without Deforest Buckner upfront. The Panthers and Redskins both finished in the bottom eight statistically against the run last season, while the Detroit defense doesn’t exactly invoke fear in the hearts of opposing offensive coordinators.

It is a fruitless task trying to predict much of the season beyond the first four or five games simply because injuries wreak havoc on so many rosters that strength of schedule will vary significantly in the second half of the year.

Last season, Drake was finally given a chance to prove he was an every-down running back in the NFL, and boy did he ever seize the opportunity. This season, the projected rushing yard total for Drake sits at 1,050.5 yards. While it is bad practice to simply take his 5.2 yards per carry down the stretch and project that over a 16 game regular season, even a dip slightly below his 4.8 career average extrapolated over 14 games, to leave room for injury, would still put Kenyan Drake past his 2020 rushing prop of 1,050.5 yards overall.

Don’t be scared off by the fact that the NFC West is such a formidable division. The Seattle Seahawks defense was 26th against the run last season and are likely without Jadeveon Clowney this year while we already mentioned how the 49ers aren’t as strong against the run as some might think. If Drake can come anywhere close to the type of player he was late last season, it’s worth taking a shot at the “over” on his 2020 rushing prop.

You can follow me on Twitter @ChrisSmithPFN for upcoming analysis. Also, make sure to follow us @PFNBets for analysis from all of our writers on futures and draft props heading into the 2020 season.