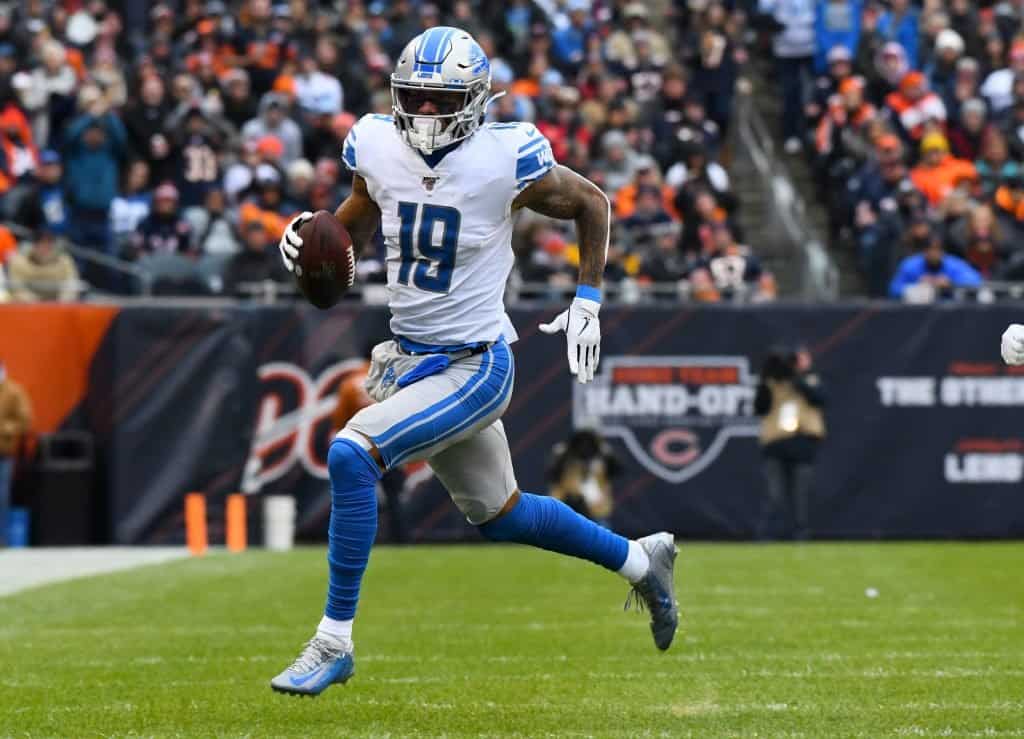 Nov 10, 2019; Chicago, IL, USA; Detroit Lions wide receiver Kenny Golladay (19) runs with the Baltimore after a catch against the Chicago Bears during the first quarter at Soldier Field. Mandatory Credit: Mike DiNovo-USA TODAY Sports
What's in this article? Click to show
Kenny Golladay: Which teams are in the hunt in free agency?
Which teams are likely out of the hunt for Kenny Golladay?
Want more NFL news and analysis?

After a slow start during the NFL legal tampering period, rumors surrounding Kenny Golladay have picked up as free agency progresses. Which teams are now in the hunt to sign Kenny Golladay, and could we see him sign today?

Kenny Golladay: Which teams are in the hunt in free agency?

After it seemed like the market for Kenny Golladay was very small in free agency, more and more rumors are coming to light as the week progresses. Which teams could be in the market to sign Golladay in the coming days?

ESPN’s Adam Schefter is reporting that the Baltimore Ravens have apparently reached out to Kenny Golladay. The Ravens currently have a need for a second receiver alongside Marquise Brown. Golladay would provide the big-bodied type receiver that could be extremely useful to the Ravens, especially in the red zone.

However, Golladay would likely need to be willing to accept that he may not get targeted a huge amount in Baltimore. The Ravens’ offense tends to be a run-first unit. Therefore, Golladay would be expected to do a lot of blocking, with limited opportunities to be a star. That may require the Ravens to overpay for a player of Golladay’s caliber.

Thursday morning saw Adam Schefter report that Kenny Golladay had met with the Chicago Bears. Since then, however, Allen Robinson has signed his franchise tender. With Robinson on the books for $18 million, the chances of the Bears signing Golladay now seem low.

The Bears could decide, however, that with Robinson on a one-year deal, they may want to invest in Golladay as a long-term option. Chicago could then trade Robinson to a team that would be looking to work on a long-term deal with the star receiver.

On Wednesday, Dianna Russini reported that the Bengals had made an offer for Kenny Golladay. Currently, that interest does not seem to be at the top of Golladay’s list of priorities, but the Bengals could still be players. If his current visits and discussions do not amount to anything, then Golladay could fall back on a Bengals team with an exciting offense.

There is still a chance the Detroit Lions could look to bring Kenny Golladay back in free agency, despite there being limited rumors. Golladay has posted good seasons with the Lions in the past, but the change at QB might be enough to ensure he looks elsewhere in free agency.

Golladay met with the New York Giants on Thursday. According to Pro Football Network Chief Draft Analyst Tony Pauline, the meeting was an opportunity for head coach Joe Judge to lay out his vision for the team with Golladay.

With no news breaking on Thursday, however, there is the possibility that Golladay may leave New York without a deal. As of Friday, both sides are expected to continue discussions. Therefore, the Giants remain in play and are still viewed as the clear favorites to land Golladay.

Which teams are likely out of the hunt for Kenny Golladay?

Over the course of free agency, we have seen movement in the wide receiver market. This movement has potentially removed some teams who may have been in contention for Kenny Golladay.

The Jaguars have had rumors linking them with a number of wide receivers, including Kenny Golladay. However, they added Marvin Jones Jr. and still have D.J. Chark and Laviska Shenault on their roster. Therefore, it seems unlikely the Jaguars would still be looking to add Golladay.

After much talk that the Miami Dolphins were the destination for Kenny Golladay, the team signed Will Fuller on Thursday. Golladay could still be a Dolphin in 2021, but with Miami expected to target wide receiver in the draft, it seems unlikely.

The Patriots added two receivers in Kendrick Bourne and Nelson Agholor. They also added tight ends Jonnu Smith and Hunter Henry in their free-agency splurge. Therefore, it seems unlikely the Patriots remain a potential destination for Golladay this offseason.

The Jets were another team that had a lot of rumors surrounding Kenny Golladay in free agency. However, they have now added Corey Davis and Keelan Cole. While they may not be out of the discussion completely, it seems as though the Jets have made other plans at the position.