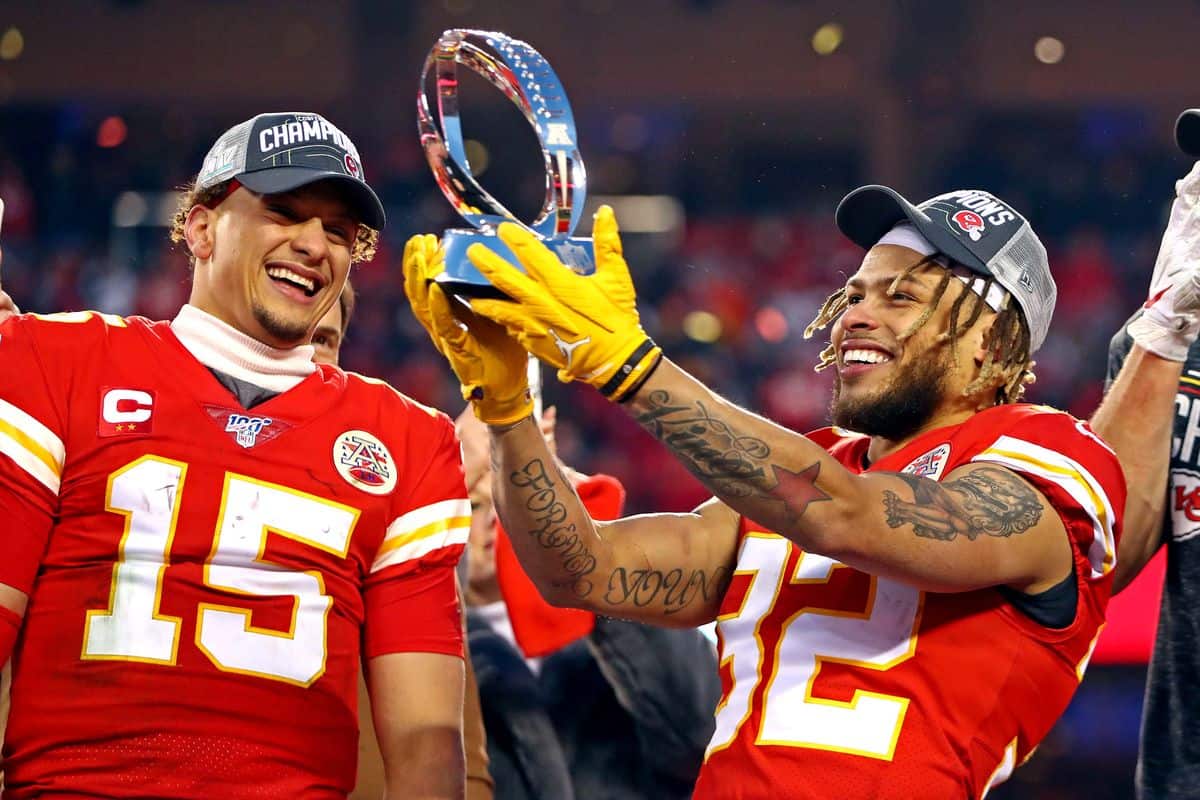 2019 was a bumpy roller coaster for the Kansas City Chiefs that ultimately ended in the highest of highs, a Super Bowl victory. The offseason has been a somewhat quiet one for a Super Bowl champion, well at least until they sent shockwaves through the NFL with a 10-year contract extension for Patrick Mahomes. With their extremely talented quarterback taken care of, let’s preview what the 2020 season may look like in terms of the Chiefs’ win totals, as well as any prop bets that may be of interest.

On the surface, there is very little difference between the Chiefs in terms of their starters entering 2020 compared to 2019. The addition of Clyde Edwards-Helaire will provide fresher legs than LeSean McCoy provided in 2019. However, beyond the addition of Edwards-Helaire, the majority of the Chiefs starting options will remain almost identical to what we saw in 2019.

Relatively, the Chiefs losses are minimal compared to the usual exodus we see following a Super Bowl victory. They made an immediate move to ensure Chris Jones would remain in Kansas City, utilizing the franchise tag to buy more time. They then turned that franchise tag into a four-year $80 million deal.

The Chiefs also ensured they would keep their talented receiving core together by restructuring Sammy Watkins’ hefty 2020 deal into a more manageable cap hit. The other losses in terms of 2019 starters this time last year are Reggie Ragland and Kendall Fuller, who have moved to the Detroit Lions and the Washington Football Team, respectively.

However, neither of those players contributed much to the 2019 season, as both played less than 50% of the defensive snaps last year. Therefore, this has been an unusually quiet offseason for a Super Bowl champion, who have gone about their business intelligently.

As we mentioned above, the changes to this defense are extremely small, with most of the differences coming in terms of depth. However, this team ranked in the top five when it comes to yards per attempt and touchdowns allowed in the passing game, so a significant improvement was not required. Their defense in the front seven needs to step up, having ranked 29th in the league in yards per carry, which at times allowed teams to put together long drives to keep their offense off the field.

The Chiefs added high-upside defensive options in the second and fourth rounds in the form of Willie Gay and L’Jarius Sneed. Gay especially has the potential to be an extremely high upside move. His talent level was among the best of the linebacker group in the 2020 NFL Draft class, but off-field incidents led to many seeing him as an unnecessary risk. If the Chiefs can get their veterans to bring him into the fold, then he could be a starter early in 2020.

Sneed is an extremely talented piece, and while the Chiefs will be hoping they do not need his skill set on the field much in 2020, he has the upside to be a valuable contributor if called upon. The Chiefs defense was in a fortunate position of not needing to chase starters in the 2020 NFL Draft, but they very well may have added two pieces that could be immediate contributors this season.

Offensively, there is very little expected to be different in the 2020 season. The Chiefs should return four starters along their offensive line with only the left guard position, between Andrew Wylie and Nick Allegretti, really up for grabs in camp. At the skill positions, we should see the starting trio of Tyreek Hill, Mahomes, and Watkins remain, with Mecole Hardman and Demarcus Robinson also seeing time on the field.

Update: One change they will have to cope with is the Laurent Duvernay-Tardif opt-out. Duvernay-Tardif is a solid guard that will be missed. His presence on the line adds stability, and with doubt already around the left guard position, the Chiefs now need to figure out both guard spots.

With McCoy departing and the prospect of a shortened offseason, it was always expected that the Chiefs would prioritize a running back at some point in the 2020 NFL Draft. The pick itself was somewhat surprising initially when they added Edwards-Helaire, but upon reflection, his style perfectly suits this Chiefs offense.

It is not clear who will be the “starter” this year, but after the Chiefs demonstrated a style of rotating backs to keep them all fresh for the playoff run. This resulted in the success we saw for Williams in the playoff stretch; we should see the Chiefs utilize both of their main backs, with some Darwin Thompson sprinkled in. While the running game was not a significant contributor to this offense last season, the elusive style will have an impact once again in 2020. 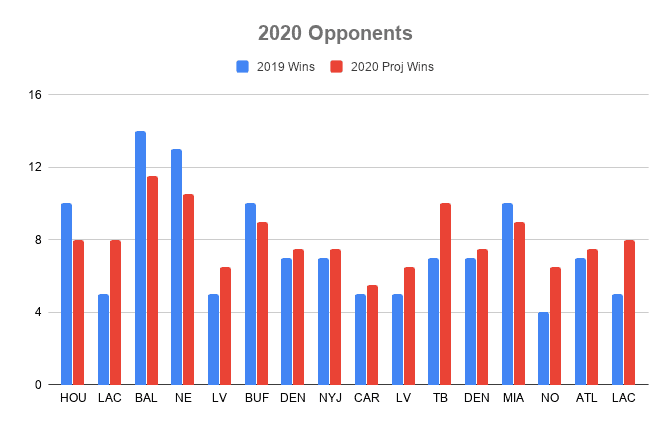 The Chiefs schedule is absolutely fascinating. It starts with four extremely tough games, including three playoff teams from 2019 and the Los Angeles Chargers, who seemingly always play them close. That tough start could see the Chiefs odds rise across the board if they stumble out of the gate. A 2-2 start would see the Chiefs odds to win the Super Bowl, the AFC, and award such as the MVP for Mahomes, increase to a point where they become a value.

After that tough start, the schedule gets somewhat easier, with just two of the Chiefs remaining 12 opponents having won eight or more games in 2019. Even looking at the 2020 projected win lines, the Chiefs only face three teams projected to win more than eight games in those final 12 matchups.

However, when you look at the key aspects of importance on the Chiefs’ schedule, there is a lot to be concerned about. In Week 3, they face the Ravens in Baltimore after traveling back from a road game in Los Angeles the week before. That is the first of four back-to-back road games on their schedule in 2020.

However, there are some positives on this schedule. One of those four back-to-back road games comes off the back of a Thursday Night Football match in Buffalo, giving them a full 10-days to prepare for the altitude adjustment required for a game in Denver the following week. Additionally, the Chiefs will receive the massive advantage of not facing a team coming off their bye during the 2020 season.

There is an interesting quirk on the schedule in that all three of the Chiefs Thursday and Monday Night Football games come in the first six weeks of the season. After that, all of their games fall on a Sunday. They do have a further two prime time games in Week’s 11 and 13 when they match up with the Raiders in Las Vegas and the host the Broncos, but those both fall on a Sunday.

The Chiefs’ current win total is a tough line to make a judgment on because 11 or 12 wins is almost precisely what most people project them to win. In 2019, they went 11-5, despite playing two full games without their former-MVP quarterback, as well as having him hobbled in a couple of others.

If Mahomes is healthy for 16 games, then the win range that I currently have is anywhere between 11 and 14 wins. My colleague Cole Thompson is in the same ballpark with an 11-5 projection. The issue is that for any team to win 12 or more games, a lot has to go right, and teams cannot afford any slip-ups.

We discussed the difficult stretch of the Chiefs’ schedule through the first four weeks. If they come out of that with two or three losses, then a 12 win season could be challenging. However, if they go 4-0 through that opening stretch and losing five games, the rest of the way seems unlikely as long as they are healthy.

Given the current climate and uncertainty of the situation surrounding the league, placing money on any team to win more than 11 games is somewhat foolish, meaning that I will just be making my selection of the over a lean. If the Chiefs manage to stay healthy, then 12 wins should be more than possible. However, that is a big if at the best of times in the NFL.

Instead, my recommendation is to stay away from betting any props on the Chiefs in 2020 until the season starts. The value right now is simply not there for any of the props. However, if they come out of the gates slow, then there could be an opportunity to jump on  Super Bowl, AFC, and MVP odds when they have moved out to a price that represents value.