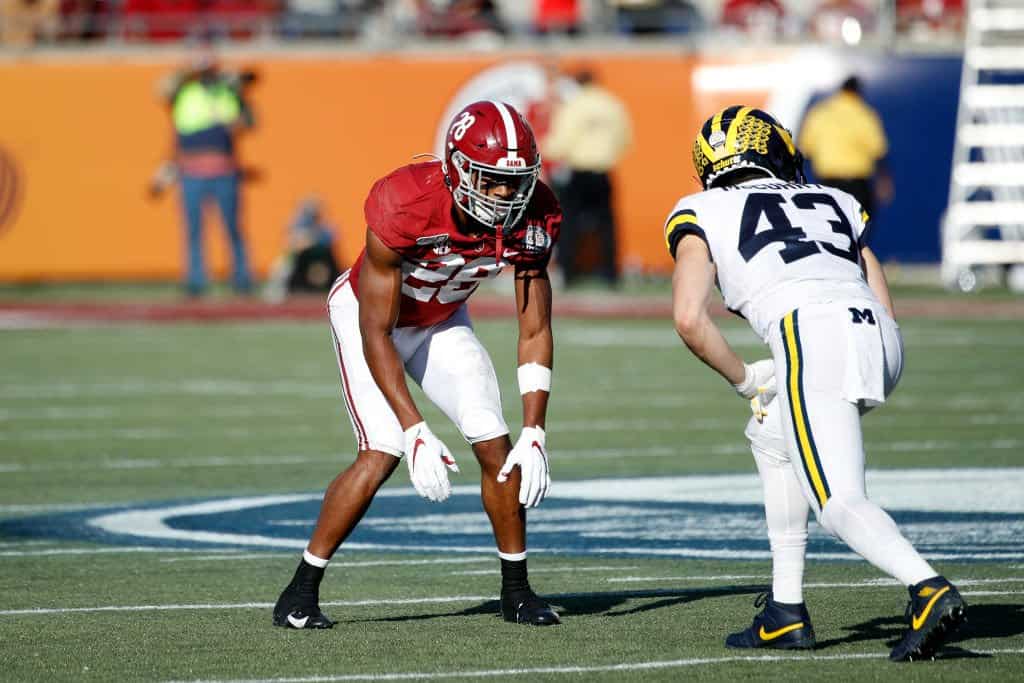 We always hear about Alabama’s lead cornerback, Patrick Surtain II. But what of Alabama’s other 2021 NFL Draft prospect at cornerback, Josh Jobe? Does Jobe have starting potential at the NFL level as well? He may not be as established or as refined, but Josh Jobe brings a similarly enticing skill set to the table. With the right coaching, he could be a big surprise in 2021 and beyond.

Josh Jobe has spent his entire Alabama career under Patrick Surtain’s shadow. Of course, neither one of them has a problem with that. The pair has emerged as a dominant tandem in 2020, but Surtain always saw the potential. Toward the end of the 2019 season, Surtain stated that Jobe “brought a lot of fire” to Alabama’s secondary. We’re seeing that fire singe opposing offenses now, but it took time for it to be stoked.

Jobe was originally a high-profile high school prospect out of Miami, Florida. He made a name for himself early and signed with the Miami Hurricanes as a freshman in high school. Miami was the first school to offer Jobe, and at first, that was enough for him to sign. But over the next three years, Jobe received interest from countless other schools.

Eventually, after Jobe played his final season in Cheshire, Connecticut, Alabama entered the conversation. In the span of 24 hours in December of 2017, Jobe de-committed from Miami and committed to the Crimson Tide.

It was a big haul for Alabama. Jobe was a four-star cornerback in the 2018 class and the 15th-best player at his position. But it wasn’t the best addition for Nick Saban. That honor went to Patrick Surtain II, a five-star cornerback from Plantation, Florida. Surtain would edge Jobe out for early opportunities, but soon enough, they’d be locking down the boundaries together.

Despite not being a starter, Jobe saw action in his true freshman season. Playing mainly as a special teamer and a rotational defensive back, Jobe logged eight total tackles and a pass deflection.

The Alabama cornerback’s role increased in his sophomore season, but still, he was mainly a rotational player. Luckily for Jobe, his physical style meshed well on special teams, and from there, he started to earn more reps.

In 12 games and two starts, Jobe put up 28 total tackles, an interception, three pass deflections, and a fumble recovery. For the 2019 season, Jobe was behind Trevon Diggs on the depth chart. However, after Diggs left for the draft, Jobe had the boundary all to himself.

On a team that also starts first-round prospect Patrick Surtain, Josh Jobe has arguably been the most productive cornerback. With one game left in the 2020 season, Jobe has 52 total tackles, 2.5 tackles for loss, 2.0 sacks, 11 pass deflections, and two forced fumbles. He didn’t quite earn All-SEC recognition, but regardless, Jobe has been one of Alabama’s most impactful defenders.

Only a true junior, Jobe has a decision to make after the season. Will Josh Jobe declare for the 2021 NFL Draft? Would it be the right choice? You may get varying answers, but as explained below, he’s put enough on tape to inspire confidence in his potential.

Jobe’s performance in the 2020 National Championship

Josh Jobe didn’t have a bad game in the National Championship, but there were some definite low moments. He drew a pass interference penalty in the end zone, which allowed Ohio State to keep pace. Jobe needs to do a better job of getting his head around, and he also can’t be careless with his hands. His physicality is inspiring, but it will get him into trouble in the NFL if he doesn’t reign it back a bit.

Additionally, Jobe’s physical nature also hurt him on another touchdown play. This one, an outside run by Master Teague, came in Jobe’s direction. Jobe had an opportunity to match Teague to the sideline, at least giving his teammates a chance to close in on Teague from the inside. But instead, Jobe directly engaged a blocker farther inside, giving Teague wide open space to move along the edge.

For most of the game, Jobe was solid, and Fields didn’t target him that much in coverage. But in those red zone sequences, he needs to make better decisions as a defender. Nevertheless, the upside remains palpable.

I don’t like to label players as “favorites” on my board. But if there’s a healthier synonym that doesn’t imply bias, then yes, Josh Jobe would probably be on that list. Much of the hype around Jobe labels him as a potential steal on early Day 3, but I think he has a compelling case on Day 2 in a cornerback class that lacks depth. And it all starts with his natural talent.

At 6-foot-1, 192 pounds, Jobe is a well-built cornerback who packs a surprising amount of play strength and physicality into a sub-200-pound frame. Jobe also has very good length, which he uses effervescently — almost to a fault.

Jobe’s consumptive use of his length gets him into penalty trouble more than others, but his proactivity as a playmaker at the catch point is near the top of his class. Jobe approaches a challenge with enthusiasm, and he’s extremely competitive. That alone is a mindset NFL cornerbacks need.

Going past the frame, Jobe also possesses very good athleticism. The Alabama cornerback’s vertical hip turns are very quick and adequately fluid, and he has great explosiveness out of those turns. This enables him to stay in his receiver’s hip pocket downfield. Additionally, Jobe also has exceptional closing speed. He doesn’t need much open field to gear up, and once he does, he has very solid high-4.4, low-4.5 speed.

What are the concerns with Jobe?

As implied earlier, Jobe is a bit raw. This relative lack of development shows up in a few phases. At the line, his footwork can be a bit choppy and flat. Thus, he still has room to improve his freedom of movement out of his stance. In pass coverage, Jobe can be a little too physical with his hands. He’s still learning the nuances of how to use his length efficiently without drawing negative attention. The flashes are bright, but Jobe will need much more consistency in the NFL.

Additionally, there are some instances where Jobe’s reaction timing can be a bit late. This happens most often on abrupt in-breaking routes. There are times where Jobe will continue to carry vertically up to 5-10 extra yards before finally changing directions and closing in on his receiver. This appears to be an issue rooted partly in his timing and partly in his balance.

If Jobe can stick to in-breaking routes more often and get lower in his stance to mitigate balance concerns, he can be a sticky cover man in the intermediate range.

What’s the verdict on Josh Jobe?

Josh Jobe needs development in certain areas, but the Alabama cornerback is already an enticing 2021 NFL Draft prospect. His numbers back up his potential. Through twelve games, Jobe leads the Crimson Tide with 11 pass deflections. Additionally, per CFB Film Room, Jobe allows just 3.3 yards per target, 1.1 yards per target on explosive routes, and only 2.8 yards per target in man coverage.

All of those numbers are safely the best among Alabama’s cornerbacks, and Jobe does this with the highest target share.

Jobe isn’t fazed in the face of adversity, and he’s a superb athlete for his size. His hand usage is a big issue that will need to be corrected. He can get carried away at times and impede the catch process unnecessarily. His face-off against Kyle Pitts was proof of that. Some cornerbacks would crumble against a 6-foot-6 behemoth, but Jobe played him like they were no different, for better and for worse.

Nevertheless, Jobe has very exciting upside, and he has the fighter mindset you want at cornerback. Although penalties are a concern, he doesn’t give up many big plays outside of that.

As of this writing on January 11, Josh Jobe still has yet to declare for the 2021 NFL Draft. A true junior, Jobe could stay for 2021. Were he to do that, he could legitimately end up being a first-round pick if he refines his hand usage. That said, Jobe is rumored to be leaning toward declaring, and odds are, we’ll get confirmation after Alabama’s National Championship game.

If Jobe does declare, he immediately adds to the depth of the CB class, and on my board, he’s a very nice Day 2 pick. He may need some time to iron out his inconsistencies as a hand fighter, and it would also be good for him to have a strong support system in which to learn. But Jobe’s upside is tantalizing, and he has the traits to be scheme diverse.

His hip fluidity, explosiveness, and length can make him a very good man coverage cornerback. By the same virtue, his closing speed and strong tackling ability makes him a good zone candidate as well.

Which teams could make use of Jobe’s talents?

Because of his strong, well-rounded pallet of developmental traits, Jobe may be a coveted player in the right range. Depending on who’s still available, he could be had in either Round 2 or Round 3, with a slight possibility that he dips to Round 4.

Earlier on, teams like the Green Bay Packers, Arizona Cardinals, Indianapolis Colts, and Buffalo Bills could be serious candidates for Jobe. In Round 3, teams like the New York Jets, Houston Texans, and Washington Football Team would also be wise to pounce on the value.

The draft is ultimately one giant investment. It’s important not to take players entirely at face value. Jobe’s inconsistency with his hands will need to be corrected, but NFL teams shouldn’t let that scare them too much. He has the length, athleticism, competitive fire, and ball skills to be a versatile, productive starter in due time. That’s always a smart investment in the modern NFL.