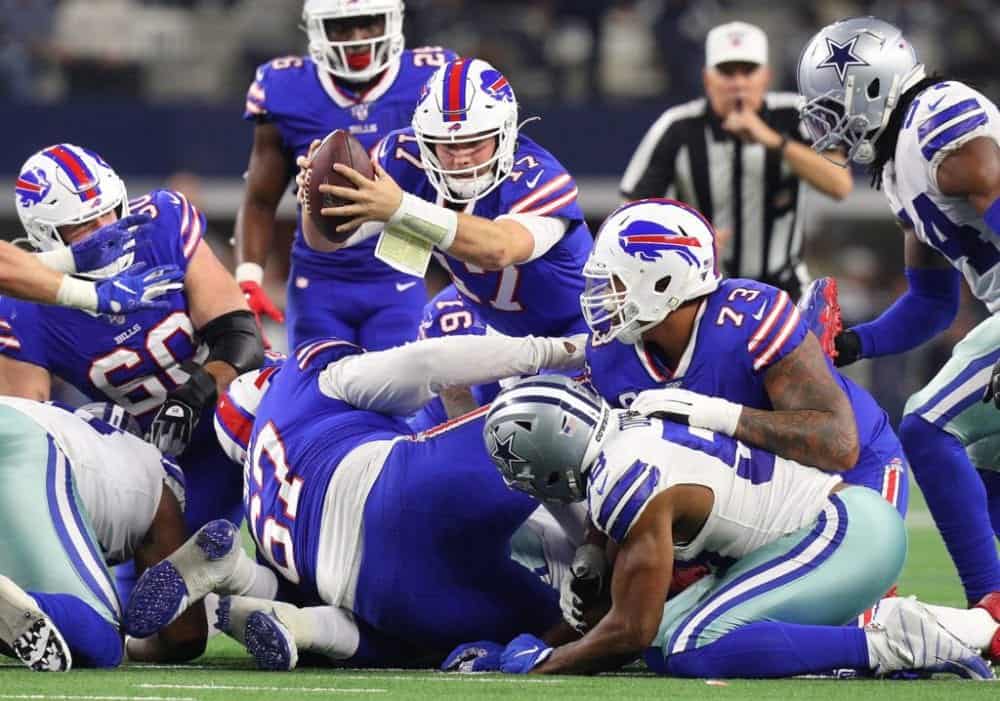 ARLINGTON, TEXAS - NOVEMBER 28: Josh Allen #17 of the Buffalo Bills lunges for 1 yard to get a first down against the Dallas Cowboys in the second quarter at AT&T Stadium on November 28, 2019 in Arlington, Texas. (Photo by Richard Rodriguez/Getty Images)
What's in this article? Click to show
Breaking tradition
Business is booming
A long December

It took a nationally televised beat down of America’s team for Josh Allen and the 2019 Buffalo Bills to (finally) receive some well-deserved credit this season. While their defense has been stout all year, according to Pro Football Network’s Offensive Share Metric (OSM), it’s the second-year quarterback who is propelling this team to new heights.

PFN OSM uses NFL’s Next Gen Stats and a series of algorithms to measure a player’s contribution to his team’s offensive production by looking at the factors only he could control. Allen’s numbers since Week 11 have progressively increased, putting him in the top third of the NFL for all qualifying passers during that span.

Does Western New York finally have a franchise quarterback? I tackle the tape from Thanksgiving Day to find out precisely that. Then we’ll discuss what December holds for a franchise looking to make the postseason for just the second time in 20 seasons.

Following their disappointing matchup in Foxborough, Dallas Cowboys owner Jerry Jones expected his lone star crew to right the ship, albeit on a short week. Then came 2019’s Thanksgiving game in Dallas, pinning a surging Bills squad against a reeling Cowboys organization.

Going in, the Bills hadn’t won a game in Dallas since 1993. That contest was the first and last victory against the Cowboys outside of Orchard Park. Hence Jones’ vote of confidence.

However, the 2019 Buffalo Bills, as well as Josh Allen, are much better this season than people believe. Sitting at 8-3 and having won five of their last seven, the Bills still found themselves as the underdog. All of America tuned in, but no one envisioned the result–except maybe Bills fans.

On that day, Allen recorded a personal high 31.09 OSM grade. He went 19 of 24 (79%) for 231 yards and a touchdown along with 43 yards on the ground with a second score. His outstanding afternoon ranked him 7th for the week among qualifying quarterbacks and marked the third consecutive game in which he’d rank top-10 at the position in PFN OSM.

Leading up to the 2019 NFL draft, Allen was criticized for vacating the pocket all too often. Instead of bailing, Allen hangs in the pocket until the last millisecond, albeit in his endzone. Either ignorance is bliss, or the Bills quarterback has established some poise.

Furthermore, Allen is an agile athlete playing quarterback. He consistently beats defenses with his legs. With that said, Allen provides proof that he’s developed his game since his time at Wyoming. Even earlier in the season, he would’ve taken off for a chunk gain after being hurried.

However, Allen remains focused on his receivers downfield. While standing in his endzone on a crucial third down, Allen lets it rip to Cole Beasley for a 29 yard gain, moving the chains in the process.

Coming out of college, scouts labeled quarterback Josh Allen as the biggest boom or bust prospect in the draft. But why?

Allen’s completion percentage throughout college was critically low for an NFL prospect. Even after more than a year in the league, Allen has struggled to complete more than 60% of his passes. You can see why that would be a real concern, especially with NFL rules in place to heighten the success of the passing offense.

It was Allen’s potential, however, that intrigued the Buffalo Bills and led to his selection. Not to mention, the kid has distinct qualities you cannot teach.

But here’s the good news, Allen has progressed every step of the way with his accuracy and timing of throws. Against Dallas, Allen completed 11 consecutive passes for 131 yards, four of which were on third down.

With his continued development, Buffalo Bills quarterback Josh Allen has now completed 60% or more passes in 75% of games played in 2019. Compare that to only two times his entire rookie season.

Another note of caution before drafting Allen was his pre-snap processing and ability to read the field after the play begins.

There were numerous occasions where Allen was asked to progress through reads without the aid of play-action or added protection during the Dallas game. Seemingly, head coach Sean McDermott had zero qualms with allowing Brian Daboll and the offense to elicit such confidence in their second-year signal-caller.

This year will undoubtedly be better than the last, but will 2019 top 2017’s Buffalo Bills team? To do that, the Bills will need to get into the postseason and win a playoff game. Having won nine games already, the Bills should have no problem locking up a seed for January.

Buffalo’s next three opponents are a combined 27-9 (.750), which will be a gigantic shift from the teams they’ve played previously.

Before Sunday, Bills’ opponents are a combined 53-91 (0.368), and that includes a 10-2 Patriots team. During those 12 weeks, the Bills have only faced two teams with a winning record, and they’ve played five games against teams who have won three or fewer games to date.

While Thanksgiving Day’s beatdown of America’s beloved Cowboys has put the team on the map per se, the Bills will still have to prove themselves in the coming weeks. I don’t expect them to be favored in two of their final four matchups to finish the year.

Flying under the radar has been the Bills’ specialty in 2019, and I don’t expect that to change, nor would they want it to change.

In this article:Buffalo Bills, Josh Allen