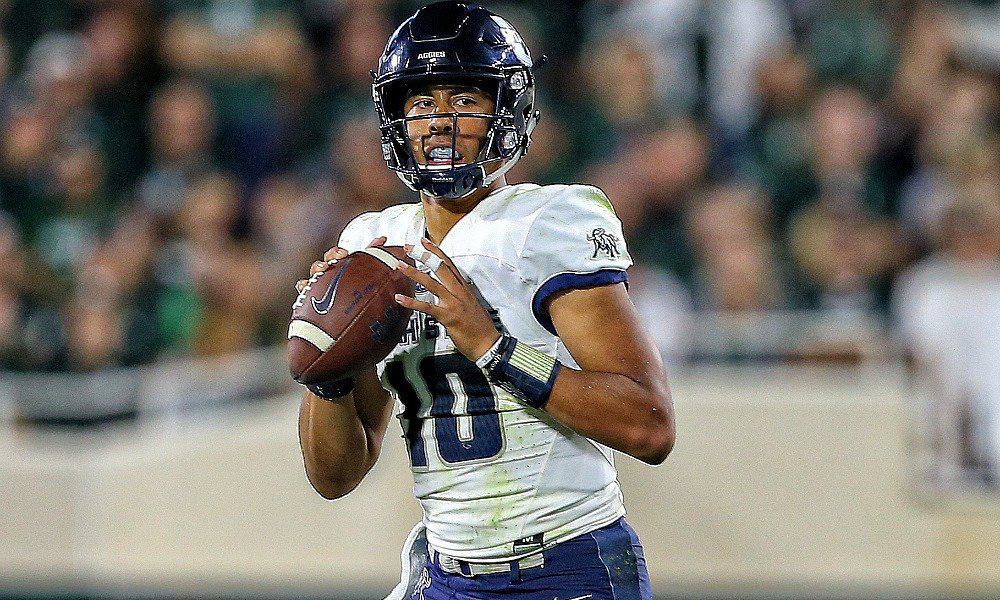 One year ago, Utah State quarterback Jordan Love was the next franchise quarterback no one was talking about. Everyone’s talking about him now, but not with exclamation points, as he might have hoped. Instead, Love’s future is punctuated with a question mark. After a down year in 2019, Jordan Love was reportedly contemplating declaring for the 2020 NFL Draft or becoming a graduate transfer. After being given some time to think, Love has officially declared for the 2020 NFL Draft. He’ll play Kent State in the Frisco Bowl, and then start the pre-draft process.

Love will join a quarterback crop that’s guaranteed to include seniors Joe Burrow, Justin Herbert, and Jalen Hurts, and that may include fellow underclassmen such as Tua Tagovailoa, Jacob Eason, and Jake Fromm. Did Jordan Love make the right decision by forgoing his final year of college football eligibility and declaring for the 2020 NFL Draft, or would he have been better off transferring and boosting his draft stock elsewhere? Let’s discuss!

Was Jordan Love right to declare for the 2020 NFL Draft?

Jordan Love still has the traits that led so many to be enamored with him after his 2018 season. The arm talent didn’t go away. The athleticism didn’t go away. From a physical traits perspective, Love is a QB with all of the tools necessary to succeed, and he has just as much upside as the rest of the 2020 class.

There are areas in which Love can improve; his upper body mechanics could use more consistency, and his decision making was particularly inconsistent over the course of the 2019 season, especially against a strong pass rush. But those are both teachable traits, and as we’ll get into in a minute, Love has the unteachable traits to buoy his stock.

There are also external factors to consider. As Tony Pauline mentioned in the article linked earlier, some prospects on the fence, as Love was before his declaration, are taking Tua Tagovailoa’s hip injury into account. Tagovailoa’s injury could cause him to slip down the draft board, and in conjunction, it could allow a high-upside, readily-available prospect like Love to command more interest.

Historical context is also important, and it could change the way teams view a prospect like Love. Love, who threw 3,567 yards and 32 touchdowns in 2018 only to regress to a near 1:1 touchdown-to-interception ratio in 2019, isn’t entering the draft as an ascending prospect. But he might not need to.

As Pauline mentioned in the article linked above, the Buffalo Bills took a similar gamble when they picked Josh Allen No. 7 overall in the 2018 NFL Draft. Allen, coincidentally from the same conference, wasn’t an ascending prospect heading into the draft, and he was a very raw prospect with only the fundamental tools to build around. Now, in his second year, with a solid support system that magnifies his best traits, he has the Bills at 9-4 well on their way to a playoff berth.

The Bills’ message when they took Allen was simple: They wanted a QB with potential and unteachable traits, and they wanted to maximize that potential. While Love doesn’t necessarily have the otherworldly arm strength that Allen has, he possesses one of the best blends of arm talent and athleticism in college football; one that guarantees a minimum draft stock, and could convince a team to bet on him earlier than most expect.

There are many NFL teams with immediate or pending quarterback vacancies, and even for a more polarizing prospect like Love, teams that recognize his traits and potential are bound to give him an opportunity. Landing with a team like the Indianapolis Colts would be very beneficial for Love, essentially bypassing the injury risk of an extra collegiate season, while receiving excellent developmental care. Entering the NFL Draft is ultimately a gamble for the Utah State QB. But it’s a good one.