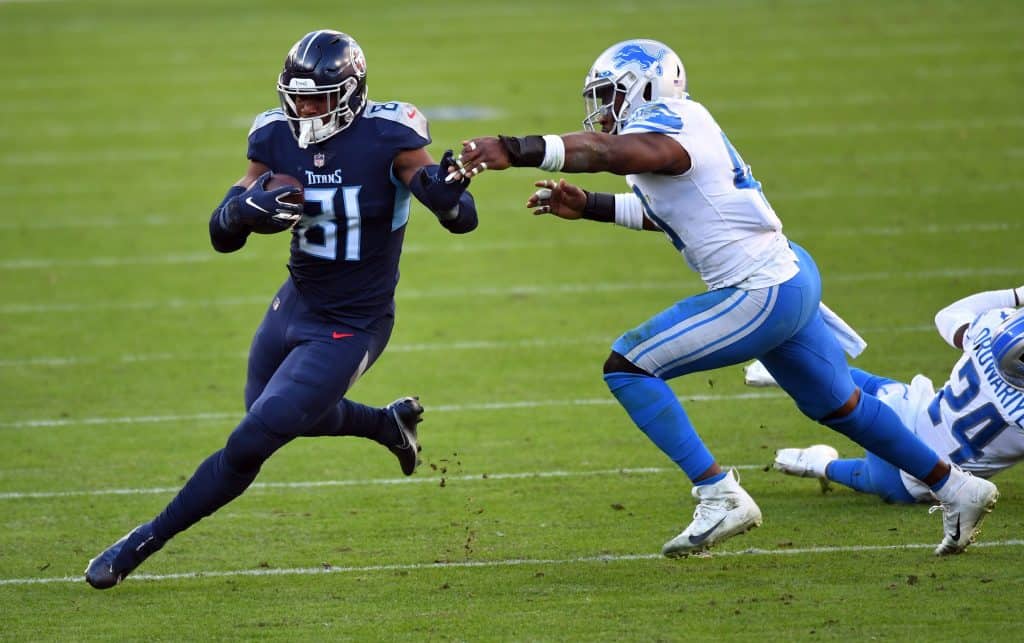 Dec 20, 2020; Nashville, Tennessee, USA; Tennessee Titans tight end Jonnu Smith (81) runs for a first down during the second half against the Detroit Lions at Nissan Stadium. Mandatory Credit: Christopher Hanewinckel-USA TODAY Sports
What's in this article? Click to show
Jonnu Smith’s contract details, bonuses, and salary
How has Jonnu Smith performed in his career?
What was Smith’s previous deal?
Want more NFL news and analysis?

After a career year in the 2020 NFL season, Jonnu Smith signed a four-year contract with the New England Patriots as a free agent. Let’s take a look at Jonnu Smith’s contract, salary cap numbers, performances so far in his career, and previous contracts.

The New England Patriots and Jonnu Smith have agreed to a four-year, $50 million contract. The deal contains $31.25 million fully guaranteed. Therefore, Jonnu Smith jumps in as the third-highest-paid tight end in the NFL heading into 2021.

Spotrac had Jonnu Smith projected for a five-year, $40.4 million deal. Hence, they have Smith set to earn $8 million per year. The Patriots have conquered that projection at $12.5 million per year.

How has Jonnu Smith performed in his career?

As with most tight ends who enter the NFL, they get off to a slow start. Most of the time, we barely see production from them in their first few seasons. However, this was also the case for Jonnu Smith as he was behind Delanie Walker in Tennessee. In his first two seasons, Smith played in 29 games, catching 38 of 60 targets for 415 yards and 5 touchdowns.

The 2019 season saw a glimpse of his talent while he filled in for Walker. In 2019, Smith set career-highs in his third season, catching 35 of 44 targets for 439 yards and 3 touchdowns. This led many, like myself, to name him the breakout TE of 2020.

In the first five weeks of 2020, Smith was tied for the league lead in touchdowns (5). He was ninth in receptions with 18 on 27 targets; his 221 yards were eighth for the position. Averaging 12.28 yards per reception, Jonnu Smith was well on his way to a monster season in 2020.

However, his role in the offense was short-lived. In Week 6, LT Taylor Lewan tore his ACL, forcing Mike Vabrel to keep Smith inline as a blocker.

Smith finished the 2020 season with 41 receptions, 65 targets, 448 receiving yards, and 8 touchdowns. Over the course of his career, Smith had 114 receptions on 169 targets, with 1,302 yards and 16 touchdowns. These numbers are somewhat underwhelming for Jonnu Smith, given that he just signed a contract to make him the third-highest-paid tight end in the NFL. The Patriots are definitely taking a shot on the upside that we saw from Smith at the start of the season in 2020.

What was Smith’s previous deal?

After being drafted in the third round of the 2017 NFL Draft, Jonnu Smith signed a four-year deal worth $3.1 million. As part of the deal, Smith received a $706,288 signing bonus, which was all the guaranteed money on the deal. In 2020, Jonnu Smith earned $2.1 million in base salary, with a cap number of $2.3 million.