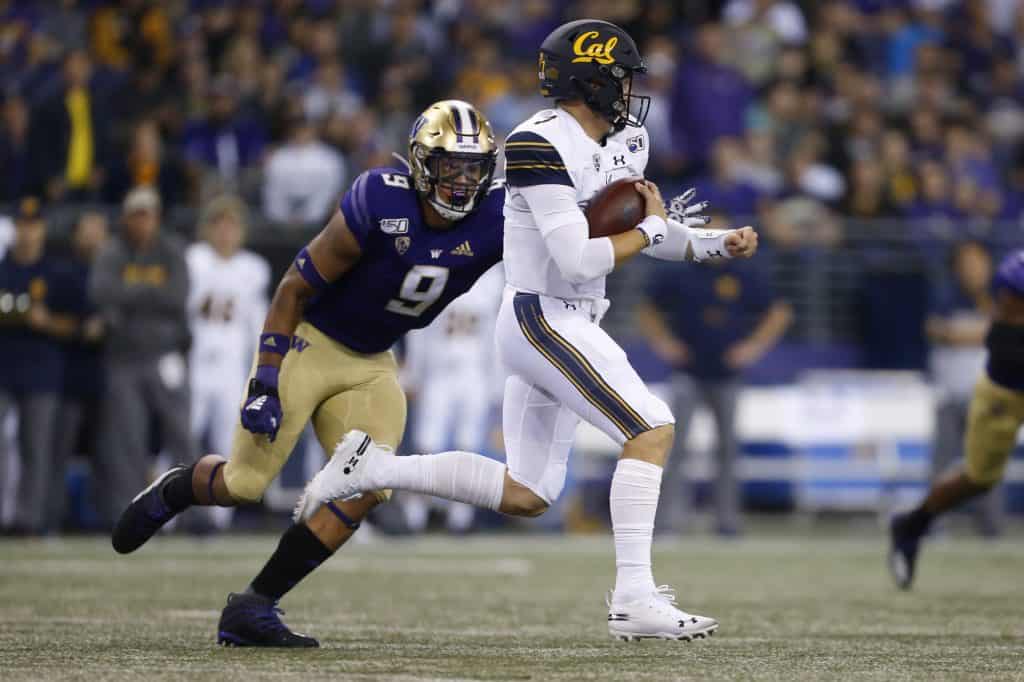 The University of Washington has become somewhat of a west coast defensive powerhouse in recent times. This year they have three notable prospects who are set to hear their name called early in the 2021 NFL Draft, including Washington edge rusher Joe Tryon.

Positives: Full-time starter as a sophomore in 2019 before opting out last season. Potentially, an explosive pass rusher with a large upside. Quick off the snap, plays with proper pad level, and gets leverage on opponents. Occasionally stands over tackle and breaks down well. Rarely off his feet, easily changes direction, and plays with balance. Quick and fluid if asked to twist or stunt. Moves well about the field, effectively uses his hands, and bends off the edge rushing the passer.

Negatives: Not quick-twitch for a stand-up linebacker and small for a defensive end. Had one year of big-time production at the college level.

Analysis: Tryon displayed flashes of brilliance in 2019 before deciding to sit out last season. He offers a good amount of upside potential, but must physically mature and add bulk to his frame before he’ll be NFL-ready. I believe Tryon would be best growing into a defensive end and lining up in a four-man line.

Washington edge rusher Joe Tryon heads to the 2021 NFL Draft as the true epitome of the Washington pipeline. Born and raised in Renton, Washington, he was a standout high school prospect at Hazen High School. A natural athlete, he turned his hand to basketball and baseball but really excelled on the football field.

In an additional testament to his athletic ability, he lined up at both defensive end and tight end. A three-star recruit and the 10th ranked player in Washington, he impressed at the 2016 Northwest Elite Summer Camp prior to his senior season. Attracting the attention of all the local programs — plus others nationally — he originally committed to Washington State.

After a senior season that saw him accumulate multiple honors including USA Today All-State and NPSL Defensive Lineman of the Year, Washington came in late in the process with an offer. In a controversial move, he flipped his commitment across the Apple Cup rivalry. It would be a move that would come back to haunt Washington State multiple times.

The Washington edge rusher has had a short but sweet career with the Huskies. As he prepares for the 2021 NFL Draft, Joe Tryon has just two years of playing experience for a multitude of reasons. It started in 2017 with a redshirt year as a freshman. At just 230 pounds out of Renton, he would spend the year gaining muscle weight to ready himself for the 2018 season.

He made his Washington debut against North Dakota, logging his first career tackle. After several single tackle games, he slowly became more involved in the defense. Then came his breakout game late in the season.

Facing his original choice of college football home, he excelled racking up his first tackle for loss and first career sack. While Washington State was left to rue what they could have had, the game served only as an appetizer for Tryon’s impact for the Huskies.

2019 was a breakout year for Washington edge rusher Joe Tryon

He started 12 games, terrorizing opposing offenses with multiple career-high 7 tackle games. In the space of two weekends, he racked up 7.5 tackles for loss and 4 sacks. Within that span, he earned Pac-12 Defensive Lineman of the Week honors against Oregon State.

He would also receive the same accolade in the regular season finale. In what would transpire to be his final Apple Cup appearance, he hit the Cougars for 2.5 tackles for loss and 2 sacks. As a result of his breakout season — 41 tackles, 12.5 for loss, 8 sacks — he earned Second Team All-Pac-12 honors.

Prior to the 2020 college football season, he appeared on multiple watch lists. Those included the Phil Steele All-American First Team, Butkus Award, and Bronko Nagurski Award. However, with the uncertainty of the Pac-12 season, Washington edge Joe Tryon opted out of the season and declared for the 2021 NFL Draft.

An explosive pass rusher with some coverage upside, Washington edge Joe Tryon is a versatile and therefore valuable prospect in the 2021 NFL Draft. Currently, he best projects to playing as an outside linebacker in a 3-4 scheme.

Due to his coverage ability, he can be considered a three-down linebacker which once again increases his value. Furthermore, there is every reason that his 6’5″ frame could take more weight, and he could transition to a true defensive end.

If we consider his natural position to be outside linebacker then where might he best fit? Some teams with needs and scheme fit include the Baltimore Ravens, Denver Broncos, Los Angeles Chargers, and the New York Giants. However, that versatility could also benefit a team that is proficient in disguising its defense. As a result, the New England Patriots would also be a good fit.