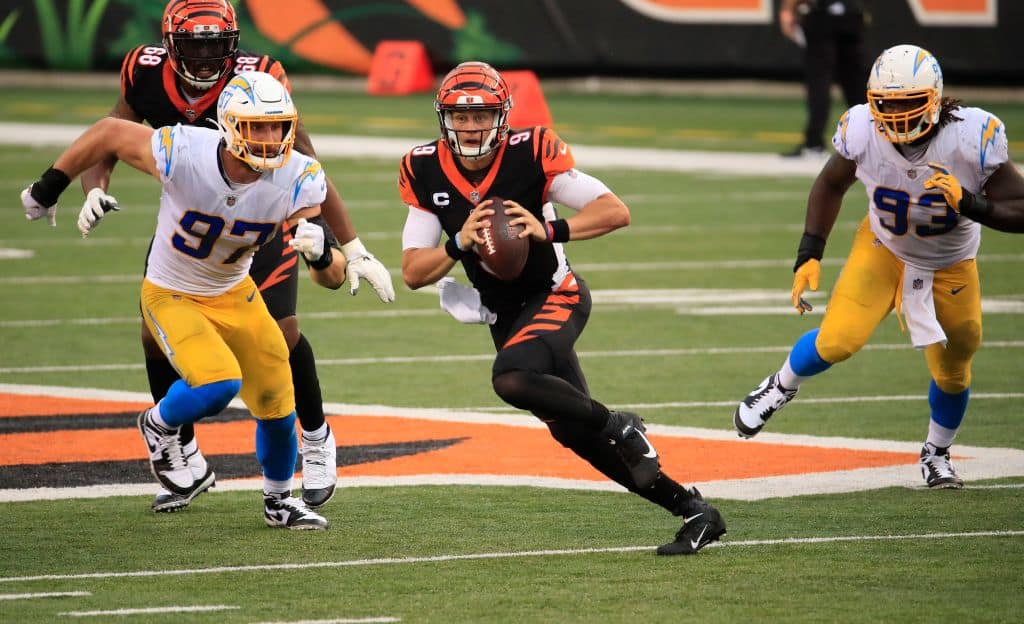 CINCINNATI, OHIO - SEPTEMBER 13: Joe Burrow #9 of the Cincinnati Bengals looks to pass the ball against the Los Angeles Chargers during the game at Paul Brown Stadium on September 13, 2020 in Cincinnati, Ohio. (Photo by Andy Lyons/Getty Images)
What's in this article? Click to show
Joe Burrow’s fantasy drumbeat this offseason
Burrow underperforms in Week 1
Joe Burrow’s fantasy value next week against the Browns

The number one overall pick in the 2020 NFL Draft went to the lowly Cincinnati Bengals, who selected Heisman Trophy winner, LSU QB Joe Burrow, to lead their franchise into the future. Shortly thereafter, the team cut ties with veteran QB Andy Dalton, solidifying Burrow’s place at the top of the depth chart, potentially for the next five years. But his legacy with the team started in Week 1 and the Los Angeles Chargers. With all the real-life hype around him, could Joe Burrow’s fantasy value be as impressive, or would he struggle coming out of the gate?

Leading up to Week 1, Burrow was seen as a high upside QB2 in most fantasy leagues. He’s definitely a prime candidate for Superflex roster spots based on his talent and the weapons around him. In Superflex dynasty leagues, Burrow was the clear cut 1.01 pick in rookie drafts in the spring and summer. Everyone knew that he was destined for greatness, we just weren’t sure if we’d see it immediately or not.

As the season approached, the stars were aligning for Bengals fans. The team’s WR1, A.J. Green, was healthy and ready to play on his franchise tag for 2020. Stud RB Joe Mixon signed a huge extension for four years and $48 million overall, essentially locking him to Burrow for his first four years with the team.

On top of that, rookie WR Tee Higgins seems to be learning the system well and won’t be relied on too heavily to start, letting him get even more up to speed by the time the team needs him. Everything was looking sharp off the field, now the team just needed to produce on the field.

In Week 1 against the Chargers, Bengals fans were curious how Burrow would perform under pressure from a real opponent. Without any preseason games at all to use as a buffer, this was essentially Burrow’s first glimpse at the real speed of the NFL. Unfortunately, Burrow’s former teammate at OSU, DE Joey Bosa, is one of the fastest in the league at pressuring the QB, so this introduction was a fast one.

In Cole Thompson’s recap of the game, he noticed that “[a]fter 30 minutes in his first NFL game, Burrow had already been sacked three times. Throw in six quarterback hits, and one can already see that the No.1 pick will be in for a long season under center.”

Once again, the issue is not necessarily with the skill position players, but with the offensive line. RT Bobby Hart struggled mightily to contain Bosa, giving Burrow tighter windows to throw through and additional stress in the backfield.

That being said, Burrow handled it well for a rookie, eventually leading the Bengals on what could have been the game-winning drive had the refs not decided to get picky with a pass interference call against Green in the end zone. PFN’s Mike Tanier felt that “Burrow was poised, decisive, and accurate. Not surprisingly for a Heisman Trophy winner who won a national championship, the ‘moment’ of facing a weak opponent in an empty stadium wasn’t too big for him.”

Burrow finished the day with 16.32 fantasy points, completing 23 of 36 passes for 193 yards, no passing touchdowns, and one interception which resembled more of an awkward fumble than a pass. He also added eight rushes for 46 yards and one rushing touchdown, which was easily the highlight of the game for the Bengals.

Overall, Burrow finished with an Offensive Share Metric (OSM) of 27.2, meaning he was largely responsible for the statistical production he showed on the stat line, a good metric to illustrate total skill on the field. Lastly, this was the first time that Burrow had lost a game in 659 days when he lost 74-72 in seven overtimes to Texas A&M on November 24, 2018. He’s clearly used to winning, and hopefully, he can bring that attitude to the Bengals franchise as well.

As we saw throughout the league this week, the lack of a full offseason program affected players who had rust to knock off or things to adjust to. Personally, I think Burrow played well for someone with all of the pressure he was under, both by the fans watching at home and by the defense on the field. If Bengals’ history is any indication, he should have a long career of playing tough, close games, where the defense is surrounding him. If we learned anything from Week 1, it looked like he will be able to handle that just fine.

Joe Burrow’s fantasy value next week against the Browns

Next up for Burrow and the Bengals is a divisonal matchup against in-state rivals, the Cleveland Browns, on Thursday night. The Browns are coming off an embarrassing 38-6 loss to the AFC North favorite Baltimore Ravens. Odds are the Browns will be coming out angry, especially at home. Historically speaking, the Bengals haven’t done well in prime time, but that was with Dalton under center. I’m willing to let Burrow create his own narrative in prime time starting this week and show how well he can perform under the lights.

For the next few weeks, expect Burrow’s fantasy output to be about what it was this week, making him a solid QB2 option in most leagues. The Browns defense is tough, and if Hart plays as he did against the Chargers, Burrow could be in for a long day. If they can help him out with double teams at the line or add shorter-developing pass route combinations for his receivers, Burrow should be able to do better as a passer. Overall, Burrow’s fantasy stock is definitely on the rise as he still has a lot of ways to shine with the weapons around him. Hey, it can’t get much worse, right?