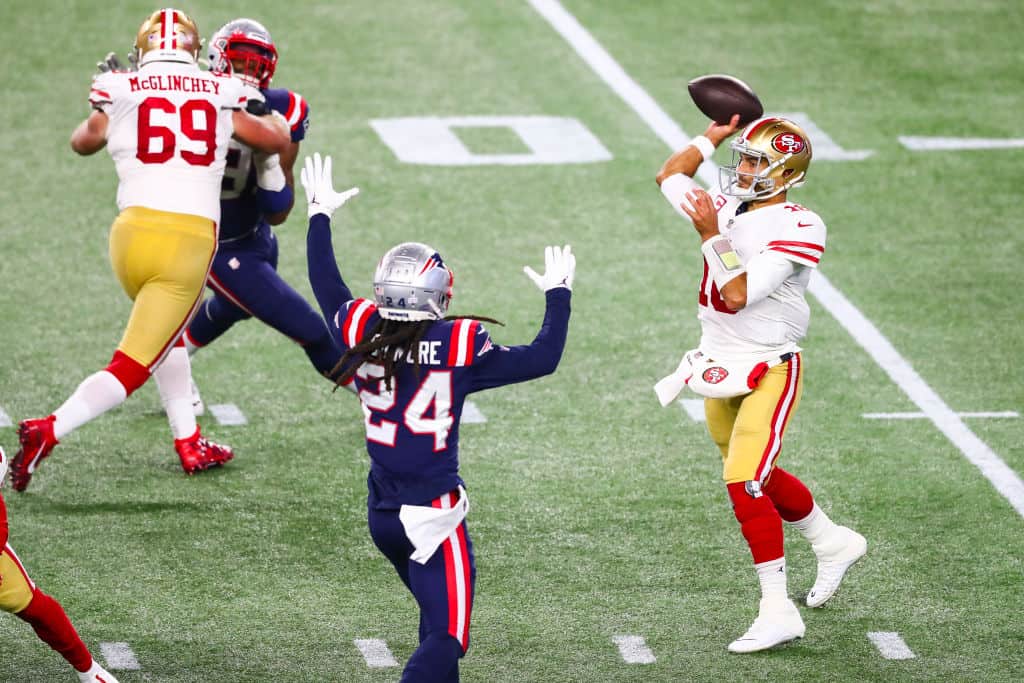 FOXBOROUGH, MASSACHUSETTS - OCTOBER 25: Jimmy Garoppolo #10 of the San Francisco 49ers throws the ball during the fourth quarter of a game against the New England Patriots on October 25, 2020 in Foxborough, Massachusetts. (Photo by Adam Glanzman/Getty Images)
What's in this article? Click to show
It seems likely Jimmy Garoppolo finds a new landing spot in 2021
Garoppolo didn’t play well in the limited work he saw in 2020 as the 49ers’ QB
Potential landing spots for Jimmy Garoppolo in 2021
Want more NFL news and analysis?

The writing is on the walls for San Francisco 49ers QB Jimmy Garoppolo. Having likely played his last NFL snap as 49ers’ QB, what are some potential landing spots for Jimmy Garoppolo in 2021?

You know that feeling when a relationship is over, but it’s just dragging on? Sure, you could try to fix things, but you already know it’s going downhill, and they pretty much have already told you how they feel?

That’s how I would describe the relationship between 49ers QB Jimmy Garoppolo and head coach Kyle Shanahan. I don’t know if he has done the whole “it’s not you, it’s me” line or not, but his Hinge profile has been updated.

Whether or not it’s been said directly, Garoppolo and his camp know it. The team has been tied to enough potential QBs and trades that we have more smoke than a California dispensary at 4:20.

If Shanahan wanted a QB with limited upside and an inability to push the ball with moderate accuracy, he could just save the $26.4 million cap hit and play Nick Mullens.

The question is if Jimmy Garoppolo already hit his ceiling? The drop from his 2019 season to last year would say yes. Another issue is his inability to stay healthy.

What seems to get glanced over in this hoopla is that Garoppolo will have the last word in this breakup. He has a no-trade clause in his contract until it expires in 2022. He will have to waive it for the 49ers to move on with another QB. Now, I would believe he would do that, as not to prolong this divorce like a horrible episode of 2:00 AM Divorce Court TV.

If the 49ers don’t find a trade partner, they could cut Garoppolo and only be out $2.8 million in dead cap. Yet, unless they have the heir to the proverbial throne, would that be worth it, given this team was just in the Super Bowl two years ago?

When looking for landing spots for the 49ers’ QB, we need to look for two things. Either draft picks or a movable QB that San Francisco can get in return.

Could the 49ers pull off the mega-trade for Deshaun Watson?

Let’s just start with the big one off the bat. Somehow GM John Lynch pulls off the blockbuster and gets the only star still left in the city of Houston, Deshaun Watson.

Knowing what teams have given up for players like Jamal Adams and now Matthew Stafford, Watson will take a fortune. But it could be done.

If Garoppolo finds a new home with the Texans, he would be the centerpiece of a team in the middle of a rebuild. Just to be clear, I do not see this coming. As much as I want to see Watson traded for the drama, I doubt the 49ers would have enough to pull it off.

Would the Atlanta Falcons be a landing spot for Jimmy Garoppolo?

How win-now are the 49ers? Matt Ryan is 35, a former MVP, and on a team looking to turn the page on their franchise. In 2020, Ryan completed 65% of his passes for 4,581 yards and threw 26 touchdowns to 11 interceptions. Ryan as the 49ers’ QB could be a fascinating combination given their talented pass-catching options.

Jimmy Garoppolo would be the bridge for the QB of the future. Given the team’s needs, they could use their fourth overall pick in the 2021 NFL Draft in several ways. Take someone like Zach Wilson or Trey Lance and have them sit a year behind Garoppolo. They could trade back and acquire more picks even. While the landing spot for Jimmy Garoppolo might not be long-term, it could allow him to show other teams he has what it takes to be a starter in the NFL.

Could a reunion be in the cards as a potential Jimmy Garoppolo landing spot?

Let’s say no one bites, and the 49ers cut bait on Jimmy Garoppolo. They take the $2.8 million on the chin and let him find his own home in free agency. Why not go back to the team who drafted him out of Eastern Illinois in 2014?

The Cam Newton experiment failed in New England, and Bill Belichick and the New England Patriots were left out in the cold while Tom Brady and Gronk partied a bit too hard on the “avoCado tequila.”

If it weren’t for Brady, Garoppolo would still be with the Patriots today. He already knows the offense. Belichick and Josh McDaniels both have experience in coaching Garoppolo. It would also eliminate the process of teaching and learning a new offensive playbook for both the Patriots and Garoppolo.