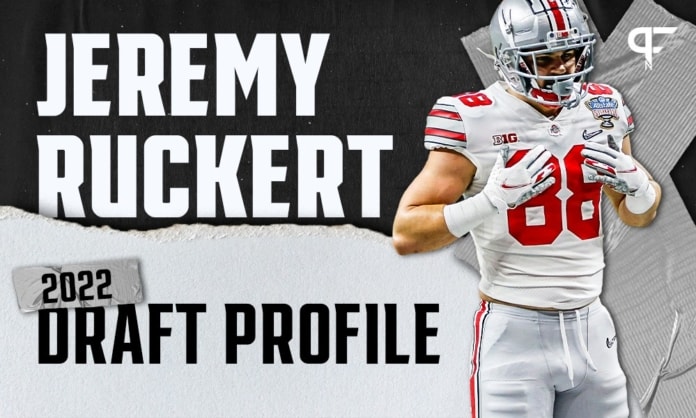 Jeremy Ruckert scouting report -- can the Ohio State Buckeyes tight end overcome preconception to be selected in the 2022 NFL Draft?

The Ohio State Buckeyes don’t have a reputation for producing NFL-caliber tight end talent. Thankfully for Jeremy Ruckert, the 2022 NFL Draft tight end prospect is used to overcoming the odds to make a name for himself. While his scouting report contains the limited sample size you’d expect from an Ohio State tight end, there are exciting glimpses that suggest Ruckert can continue to exceed expectations and smash preconceptions.

Being a tight end prospect in the 2022 NFL Draft class is a thankless task. Last year, Kyle Pitts redefined the standard at the position. Anyone who comes afterward will be held up and scrutinized against that standard, which is wholeheartedly unfair. Pitts is a unicorn and a rare breed — let’s not evaluate anyone against him.

Instead, let’s evaluate Ruckert’s draft credentials against what the NFL requires out of the tight end position. They’re so much more than the QB comfort blanket that they once were. They need to be a downfield threat and have the blocking ability that separates excellent tight ends from big-bodied receivers.

Ruckert is certainly a threat in the passing game. Although we’re dealing with a limited sample size — 34 receptions across his four seasons — the Buckeye has excellent film in this regard. During the games studied, there were zero examples of drops. Ruckert catches everything.

Ruckert combines excellent catch radius with strong hands and excellent catching technique. He’s a dangerous touchdown threat, evidenced by over a quarter of his receptions resulting in a house call. The Ohio State tight end has enough route-running savvy to be dangerous down the seam, ghost into space in the intermediate area, and break fluidly on shallow crossing routes.

He’s not an athletic freak like Pitts (wait, we’re comparing prospects to Pitts again!), but Ruckert does have some deceptive athleticism for his size. There is an explosive nature to his game. Ruckert also has a little wiggle to his movement, which helps him sell route fakes when vertically stretching the field. Furthermore, there are some examples of him creating separation with sharp cuts and a good change-of-direction ability.

As a blocker, Ruckert is entertaining as hell. He puts everything he’s got into every blocking rep, whether that’s as an inline tight end, a lead blocker, or blocking downfield to extend running plays. There are plenty of examples of him throwing a guy out of the club or putting him in the dirt. Additionally, Ruckert displays football intelligence to pick up uncovered players.

While Ruckert has some intriguing upside as an NFL Draft prospect, his scouting report doesn’t come without areas for improvement and potential pitfalls.

His limited sample size as a pass catcher will inevitably be held against him. NFL teams will want to see more evidence of Ruckert’s ability in this regard throughout this season. To be a successful tight end in the NFL, he will have to demonstrate a more complete route tree than he’s previously shown.

Ruckert’s most significant area for improvement will be from a blocking perspective. There’s no doubting his willingness as a blocker. Furthermore, he has demonstrated an understanding of utilizing angles to help open running lanes at different field levels.

Despite this, his timing and technique are very much a work in progress. There are too many examples of the Ohio State tight end flying past his man, barely getting a hand on him as he mistimes contact. This often has the result of him finishing the play on the turf.

Furthermore, while Ruckert has NFL size at 6’5″ and 250 pounds, he could use another few pounds of muscle strength to ensure he holds up against more physical defensive ends at the NFL level.

Based on the south shore of Long Island, Lindenhurst is a small village in Suffolk County. Home to less than 30,000 people with a high school of fewer than 2,000 students, it’s as far removed from a hotbed of football talent as you could imagine.

And yet, they have their very own NFL Draft prospect in Ruckert. As he attempts to turn collegiate success into NFL aspirations, the Ohio State tight end has already left an indelible mark on Lindenhurst High School. A three-time first-team Long Island selection, a first-team All-USA Today selection, and the New York State Gatorade Player of the Year, Ruckert had a laundry list of personal honors.

However, leading Lindenhurst to their first-ever Long Island Class I title will leave a legacy greater than his 3,133 receiving yards and 37 touchdowns for the Bulldogs.

While Lindenhurst can rightly be proud of Ruckert, the tight end has remembered his roots along the way. This was no better demonstrated than during his recruiting process. A four-star talent who was a top-50 player nationally, Ruckert received offers from across the country. Persuaded by post-football opportunity and the personal approach of coach Urban Meyer, Ruckert committed to Ohio State early in the process and never wavered.

Committing to Ohio State was a bold move for the young tight end. The Buckeyes’ offense famously offers limited opportunity for receptions and even fewer pathways to a professional career at the position.

That became apparent in a hurry for Ruckert. Although he appeared in 12 of 14 games in 2018, he barely troubled the box score. His 13-yard catch in the season opener against Oregon State was the only catch during his first year in college football.

Almost a full calendar year later, the Ohio State tight end made his second career catch. Then came his third, fourth, and fifth in a productive flurry against Florida Atlantic. Within the space of one game, Ruckert tallied 2 touchdowns, 38 yards, and 4 catches.

Seizing his opportunity and making a senior season return

Football is frequently about maximizing your opportunity, and Ruckert seized every chance he got as a pass catcher. While he snagged a third career touchdown against Northwestern, he also flashed a penchant for the big game with a 16-yard score against Wisconsin in the Big Ten Championship Game.

Ruckert cemented his reputation for performing under the bright lights during his junior season. In a pivotal early-season clash with Penn State, he added another 2 touchdowns to his résumé. Against Clemson in the College Football Playoffs semifinal, Ruckert secured 2 more TDs as the Buckeyes trampled the Tigers in a shocking result. Although Ohio State lost to Alabama in the National Championship, Ruckert contributed a 36-yard catch on college football’s biggest stage.

Ruckert’s sensational late-season performances promoted him to potential NFL Draft prospect last year. However, the Ohio State tight end opted to return for his senior season. He started this year on the Mackey Award watch list, and despite not scoring a touchdown through three games, he already has 6 catches for 81 yards. Furthermore, Ruckert is averaging a career-high 13.5 yards per catch.