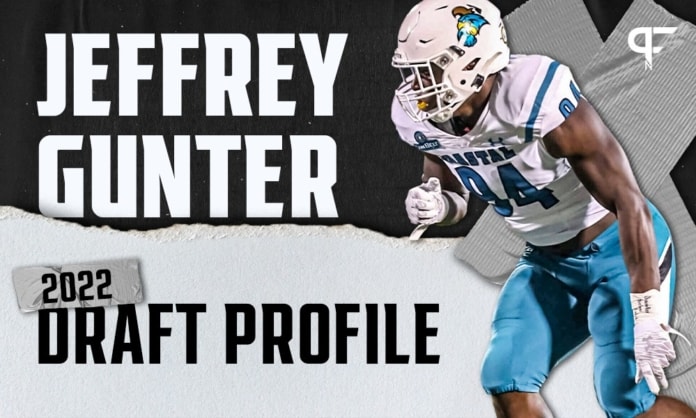 Coastal Carolina defensive draft prospects are like buses. Having waited nearly 10 years for one, two come at once. Last year, Tarron Jackson became the first Chanticleers defensive player to be drafted since 2012, and now Jeffrey Gunter has the potential to follow him in the 2022 NFL Draft. The Coastal Carolina LB/DE could be drafted even higher than Jackson’s sixth-round selection by the Philadelphia Eagles, and his scouting report reveals why.

Jackson may have been the first Coastal Carolina defensive player to be drafted since 2012, but Gunter’s scouting report shows that he has the skill set to be selected even higher than his former teammate in the 2022 NFL Draft.

The Coastal Carolina LB/DE is exceptionally versatile. That was evident during his high school career, and it’s translated to his college career. As a Chanticleer, Gunter has lined up at defensive end and linebacker. He has the potential to play 4-3 DE, 3-4 OLB, and has aligned at the wide-9 position. Stood up or with his hand in the dirt, Gunter can do it all.

How can he be so versatile?

Gunter has an intriguing athletic mix of size, length, and strength. He arrived at Coastal Carolina at 225 pounds but has bulked up to 260. While he may need to add further muscle to succeed at defensive end in the NFL, Gunter’s strength is evident at his current weight.

He can bull rush with the best of them. There are endless examples of Gunter forcing his man back into the quarterback, collapsing the pocket. His length allows him to move men with just one arm at times, again demonstrating incredible strength.

Although he doesn’t have elite speed — we’ll get there shortly — Gunter is explosive. He often wins at the line of scrimmage by exploding past his man, arriving in the backfield before the offensive lineman is out of his stance. He’s also blessed with impressive lateral agility, allowing him to rush inside or scrape across the line of scrimmage in run support.

While Gunter could be an early Day 3 selection in the 2022 NFL Draft, there are some areas for improvement in his scouting report. Furthermore, some athletic limitations could halt the Coastal Carolina LB/DE’s ascent in the class.

Gunter doesn’t possess elite speed or even good play speed. Although he plays faster than his high school testing time, he’s far from being considered a speed rusher. Gunter has a hot running motor in pursuit, but his top-end speed may present issues at the NFL level.

While he demonstrates athletic ability and lateral agility, Gunter is not bendy as an edge rusher. The NFL has an ongoing and increasing infatuation with bendy edge rushers, which may limit interest in the Coastal Carolina LB/DE.

Currently, Gunter relies on power and a small array of pass-rush moves to win. For him to consistently win at the NFL level, he will need to concoct a better pass-rush plan. If Gunter is unsuccessful at the first attempt, he needs to combine moves, something lacking from his game right now.

Riverside High School in Durham, North Carolina, is not known for producing NFL-caliber talent. This isn’t a disparaging hot take against the Pirates football program — it’s a statement of fact. Just two Pirates players have made it to the peak of professional football, and there are no active players on rosters to start the 2021 NFL season.

That should change next season, with Gunter a highly anticipated NFL Draft prospect. However, the lack of a pipeline to the pros from Riverside demonstrates the battle the Coastal Carolina defensive end has endured to get to the precipice of the NFL.

Despite logging 83 tackles, 18 tackles for loss, and 8.5 sacks across his final two high school seasons, Gunter was overlooked as a recruit. A two-star prospect according to 247 Sports, he was the 178th strongside defensive end in the 2017 class. Furthermore, Gunter wasn’t even viewed as a top-100 player in North Carolina.

As a result of his low recruiting profile and some below-average testing times — ESPN lists Gunter’s high school 40-yard dash at 5.10 seconds — he only held one FBS offer. At the end of his senior season, Gunter committed to making the 200-mile journey down the I-95 to Myrtle Beach.

Although he came in underweight by college football standards at 225 pounds, Gunter was able to make an immediate impact for the Chanticleers. Like all true freshmen, he excelled on special teams. Unlike most players in their first year, his influence extended far beyond making plays on the field.

While he played in all 12 games and made his first start against Arkansas, Gunter’s leadership qualities led to him being named a team captain for the game against Troy. The Coastal Carolina freshman led by example with a tackle for loss, one of 3.5 tackles for loss in his first season.

Gunter continued to lead in his sophomore season. Starting all 12 games at defensive end for the Chanticleers, he racked up a team-high 14 tackles for loss, including a career-high 3 tackles for loss in a single game against Campbell. A disruptive force from the defensive end position, Gunter dominated to the tune of 49 tackles, 5 sacks, 2 pass breakups, and 1 forced fumble.

The Chanticleers Defensive Player of the Year enters the transfer portal

There were just three games in the 2018 season where Gunter didn’t register a tackle for loss. Unsurprisingly, he was named to the All-Sun Belt Conference first-team. Furthermore, the ascending defensive end was named the Coastal Carolina Defensive Player of the Year.

After his standout season, Gunter shocked the Chanticleers nation by announcing he was entering the transfer portal. The assumption was that Gunter would chase Power Five football to enhance his NFL Draft stock. That appeared to be confirmed when he transferred to NC State. However, there were factors greater than football that influenced his decision.

The move to Raleigh allowed Gunter to be closer to home. A family man through and through, his transfer to the Wolfpack allowed him to help his mom through some difficult times. Meanwhile, he faced some difficulty of his own on the football field. Due to NCAA regulations, Gunter was forced to remain on the sidelines for the 2019 season.

With the personal issues resolved, Gunter longed to return to his football family. Anyone who has watched Coastal Carolina knows that there’s something special going down in Myrtle Beach. Their former defensive end wanted to be back, as he told The Sun News:

“I just missed everyone. I could have gone Power [Five] but there’s nothing like playing with Tarron Jackson, C.J. Brewer, Jerrod Clark, Silas Kelly, Teddy Gallagher. All those boys. Those are really my family, and I just missed them so much I had to come back.”

Gunter came back and played better than ever before. Playing the bandit position (a mix of LB and DE for Coastal Carolina), he led the nation with 6 forced fumbles. Meanwhile, he racked up 58 tackles, 12.5 tackles for loss, and 6.5 sacks. Additionally, he flashed his coverage ability with an interception and a pass breakup.

For the second time in his career, Gunter earned first-team All-Sun Belt honors. Although he could have declared for the NFL Draft last season, he opted to return to Myrtle Beach for his redshirt sernior season. In doing so, Gunter has the opportunity to elevate his stock. If he continues his defensive domination, an early Day 3 selection or higher isn’t out of the question.