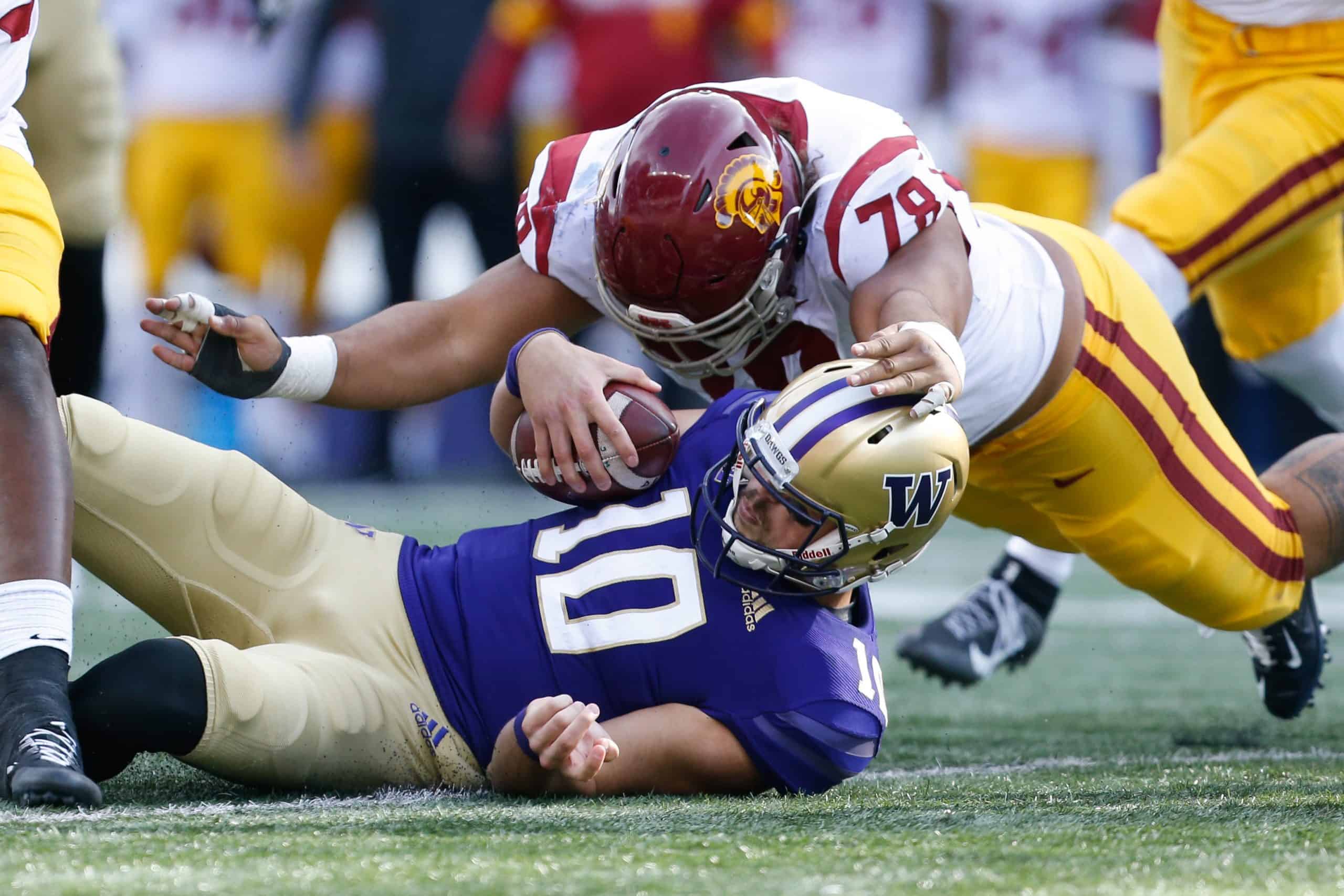 There is nothing more entertaining than watching a west coast defensive tackle prospect. Whether they be oversized, undersized, or anywhere in between, the Pac-12 interior defender is the best it gets in draft scouting. After his recent declaration, USC’s Jay Tufele is an NFL draft prospect up there with one of the most entertaining of the group.

He isn’t the physical specimen that Vita Vea was moving offensive linemen like they were a significantly younger brother. He also isn’t a super undersized scrapper as Hercules Mata’afa was. But even with his more traditional size, he still has a uniqueness about him that makes him an incredibly intriguing as a draft prospect.

Pros: Balance and change of direction

This is an exciting combination to put together, but it works uniquely in Tufele’s favor. The term “dancing bear” is thrown around often, but it works for this young man. He’s able to almost glide through the air off contact into a plant and hard direction change. Tufele is about as fluid of a 315-pound player as you’ll find.

Part of his fluidity has to come from his background in Rugby. His fluidity is most evident in his ability to keep his head up and mirror runners when he finds himself 1-on-1 against a ball carrier. The change of direction also helps him as a pass rusher. He’s able to get wide from shoulder to shoulder and put pressure on interior blockers laterally.

But even when Tufele gets popped by a blocker or a double team, his flexibility is plain to see, and he’s able to keep his feet and reestablish his base.

When he’s able to put his fluidity together with accurate hands on a pass rush, his ability to collapse the pocket through the shoulder of blockers is fun to watch. Tufele possesses a nice club and rip move that displaces and disorients blockers momentarily. This displacement is just enough for him to beat the block.

He’s shown the ability to locate opposing strikes and control the hands or wrists of blockers as he sheds and pursues. He’s also deployed a pretty devastating hump move from time to time, and if the blockers base is not completely set, they will become airborne.

At 315, one could surmise that he’d be more of a two-gapping, run-stuffing three-technique or a decent pass-rushing one technique. Tufele, however, consistently shoots across the face of blockers trying to reach him off the snap. When he’s able to pin his ears back and rush the passer, he consistently puts pressure on blockers to get out of their stance quickly if they want to keep him in front.

This is his best trait. When it comes to reading the guard in front of him, Tufele shows a reactionary twitch that might be unrivaled by anybody I’ve scouted. He moves with pulling guards as if they’re looking in the mirror. He beats blockers on stretch plays because he’s quicker than them and has an elite processor. He’s able to react to all different types of strikes from blockers. It’s fun watching him see the game in front of him.

Where Tufele needs to improve

The wingspan is less than desirable, and when he does miss on his initial hand counter, he can give up his chest and get locked up. It can hurt him when rushing the passer as well. His counters aren’t consistent as a rusher because he’s not truly able to use speed-to-power rushes that force blockers to really hunker down and build a base. All things considered, he could develop his hands more, as Kenny Clark has, to help hide his length disadvantage.

He’s consistently inconsistent. There are times, even when he’s fresh, that Tufele will pop up out of his stance instead of keeping his knees bent in a nice athletic stance. Those end up in pass rush attempts that stay static. It also tends to hurt him against double teams, an area he’ll really need to improve upon if he wants to be a true three-down defensive tackle. There are too many instances where he gets spun around and blown off the ball against combination blocks.

Tufele is one of the top interior defenders in a pretty diverse class. Florida State’s Marvin Wilson should be the consensus top interior defender, but there is a conversation to be had about Tufele being right behind him. It’ll be difficult without seeing an improvement in pad level and hand technique to value him on day one, but this is a darn good football player that could easily hear his name called in the top-50.

The Minnesota Vikings should be doing whatever necessary to get their hands on a few of these top interior defenders come April of 2021. Might as well get acquainted with this young man.