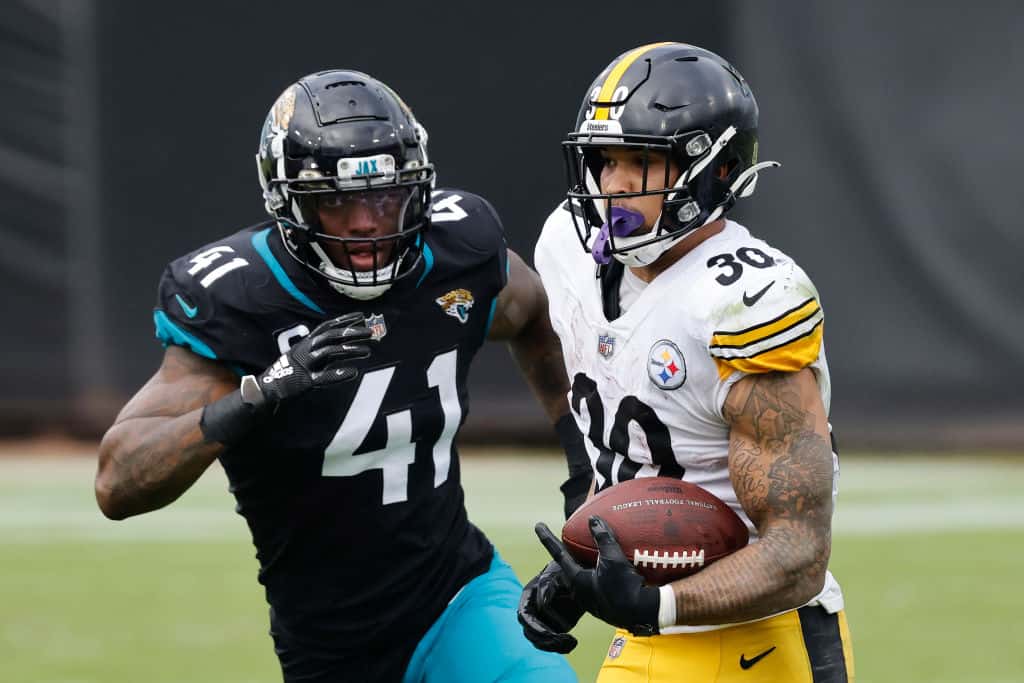 JACKSONVILLE, FLORIDA - NOVEMBER 22: James Conner #30 of the Pittsburgh Steelers runs with the ball past the tackle of Josh Allen #41 of the Jacksonville Jaguars at TIAA Bank Field on November 22, 2020 in Jacksonville, Florida. (Photo by Michael Reaves/Getty Images)
What's in this article? Click to show
After a strong first half, James Conner’s season has fallen away drastically
The Steelers offense has been strange this season
Should you start or sit James Conner in your fantasy playoffs in Week 16?
Want more fantasy football analysis and news?

After being cleared to return from a quad injury, can James Conner provide value for fantasy football managers in Week 16? Let’s take a look at Conner’s season so far, the situation in Pittsburgh, their Week 16 matchup.

After a strong first half, James Conner’s season has fallen away drastically

On the season, James Conner is averaging 12.3 fantasy points per game. Of his three seasons as a starter, that is his worst return on a per-game basis. However, even then, the average does not tell the story of a season that has very much been made up of two halves.

By the numbers, from the first half to the second half of the season

After a terrible start in Week 1, where Conner scored 3.7 fantasy points in PPR formats, he went on a superb run for fantasy managers. Between Weeks 2 and 8, Conner averaged 17.8 points per game. He scored five touchdowns and managed double-digit fantasy points in all six weeks.

However, things took a turn for the worse in Week 9, when Conner managed just four fantasy points. Since Week 9, Conner has played in just four of the Steelers’ six games, generally struggling when he has played. In those four games, Conner has only scored double-digits against the Jacksonville Jaguars. In total, in that period, he has averaged just 6.4 fantasy points per game.

After finding the end zone in five of the Steelers’ first seven games, James Conner has not scored since. Just twice this season has he scored double-digit fantasy points in PPR formats when not scoring a touchdown. Conner rushed for over 80 yards in those two games, adding three receptions to boost his PPR scoring over 10.

However, Conner has not rushed for over 100 yards since Week 6 and has not had 100 combined yards since Week 7. All of this has led to Conner ranking 29th at the position in Pro Football Network’s Consistency Score.

The Steelers offense has been strange this season

The games against the Dallas Cowboys and Buffalo Bills make sense, as the Steelers were trailing for large parts of the game. However, in the matchup against the Cincinnati Bengals and Jacksonville Jaguars, Conner had just 26 combined carries in games the Steelers won by an average of 25 points.

The Steelers have been extremely pass-heavy this season

Despite being 11-3, the Steelers have thrown the ball 62% of the time this season, with Ben Roethlisberger leading the league in passing attempts at 559. Of the 10 teams to throw the ball at least 60% of the time, only three have a winning record.

However, when you look at their efficiency running the ball, it is no real surprise the Steelers pass a lot. At 3.7 yards per carry, they are tied for the worst number in the league. At 72 first downs gained running the ball, only the Houston Texans have fewer. It has not been good for the Steelers, regardless of who is in the backfield.

In the Week 15 loss to the Bengals, Benny Snell Jr. found some success with Conner absent with a quad injury. Snell carried the ball 18 times for 84 yards, averaging 4.7 yards per carry. However, when Snell was the lead back in Week 12 against Baltimore, he managed just 3.8 yards per carry. At 4.3 yards per attempt, Conner leads both Snell and Anthony McFarland in yards per attempt.

Should you start or sit James Conner in your fantasy playoffs in Week 16?

While James Conner has been the lead running back for the Steelers this season, can fantasy managers trust him when it matters most in Week 16?

The Colts rank as the 12th-toughest run defense in terms of fantasy points allowed in standard formats, 14th in PPR. However, when we look at Pro Football Network’s Defensive Points Allowed Consistency Score (D-PAC), the picture becomes less clear.

The Colts rank as the 10th-most favorable matchup for running backs in standard and fifth in PPR. That means that while they do not give up a huge amount of points on average, they give up a consistent amount each week. However, there is plenty to be concerned about.

The Colts defense allows just 75 rushing yards per game to opposing backs and have given up just nine touchdowns. They have allowed 100-yard rushing games just twice, both times to Derrick Henry.

Additionally, they allow just 30.2 receiving yards per game to opposing backs. In PPR formats, there is some reason for optimism, as they allow 4.8 receptions per game. As a bonus, they have also allowed four receiving touchdowns to running backs this season.

Conner leads the Steelers’ backs in targets with 30, so there is reason to believe he could have a solid floor this week. However, he, and the entire Steelers RB group, has yet to score a receiving touchdown.

Anytime a player comes into a game off an injury, there is a reason for concern, especially on a team that has already secured its place in the playoffs. One slight tweak and the team may decide he is done for the day.

That is the dilemma facing James Conner’s fantasy managers in Week 16. Do you risk a player who has been up and down this season, or do you play it safe and look elsewhere? Entering Week 16, I have Conner as an RB3/FLEX in PPR and a low-end FLEX play in standard formats.

In this article:benny snell, James Conner