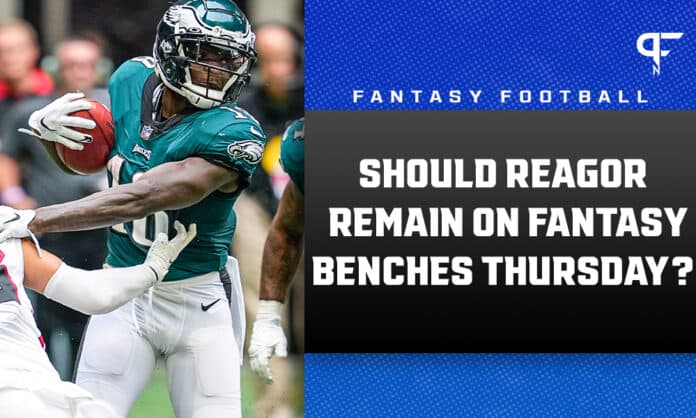 Jalen Reagor will be starting on some fantasy teams in Week 6. Before he starts on yours, understand the risks heading into Thursday night.

By BJ Rudell
October 14, 2021
What's in this article? Click to show
Jalen Reagor, the promising prospect
Increased target competition in Philadelphia
Should you start Reagor in Week 6?

This summer, Philadelphia Eagles wide receiver Jalen Reagor was viewed by some as a breakout candidate in fantasy football. But is he still relevant, and could he be a deep-league streamer in a Thursday Night Football matchup against the Buccaneers?

A first-round pick in 2020, Reagor’s rookie campaign was marred by injuries and erratic quarterback play. He mustered a 31-396-1 receiving line while netting 26 yards on 4 carries across 11 games, placing him just inside the top-100 fantasy wideouts. He cracked double-digit fantasy points only once — a 13.2-point effort in Week 8, thanks to his only touchdown of the campaign. In other words, Reagor was virtually unstartable last year.

At first glance, his WR63 ADP this summer suggested some improvement over 2020’s production. But for context, last year’s 64th-best fantasy WR was David Moore, who averaged the same fantasy points per game (7.4) as Reagor did.

Interestingly enough, this year, Reagor is the 64th-best fantasy WR, averaging 7.6 points per contest. So why hasn’t he made a sophomore leap?

For starters, the arrival of highly touted first-rounder DeVonta Smith has cut into Reagor’s upside. Smith has quickly asserted himself as Jalen Hurts’ No. 1 receiver, amassing a 25-314-1 line —  nearly matching Reagor’s 2020 production in fewer than half the games.

Then there’s ascending 23-year-old Quez Watkins, who has seemingly leapfrogged Reagor to capture the No. 2 WR role. Additionally, a healthier Dallas Goedert and Zach Ertz (both missed five games last year) have helped stabilize an offense that in 2020 leaned too much on the likes of Greg Ward and Travis Fulgham.

Furthermore, among all Eagles wideouts who have caught at least 1 pass, Reagor is last with only 8.2 yards per reception.

Should you start Reagor in Week 6?

With Reagor, youth and talent are ever-present. He could carve out a solid NFL career, if not a very good one. The question is whether this is the right season, or the right team, for him to take another step forward. With six other pass catchers (including Miles Sanders and Kenneth Gainwell) vying for weekly touches, Reagor is the ultimate boom-bust starter. If you’re decimated by injuries and/or byes, go for it. Otherwise, there are probably a dozen or more safer options on waivers.