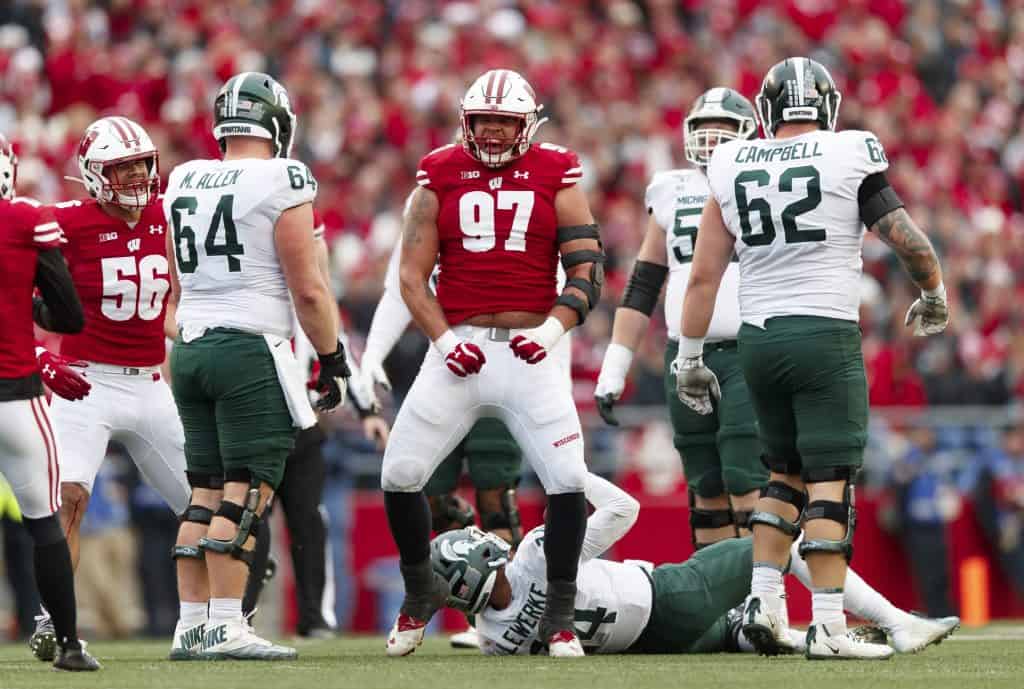 The Wisconsin Badgers have had an incredible recent history of success in the NFL, with multiple defensive stars hailing from Madison. Can Wisconsin defensive lineman Isaiahh Loudermilk add his name to that formidable list at the 2021 NFL Draft?

Positives: Aggressive two-gap defensive end with growth potential. Fires off the snap with an explosive first step, works his hands throughout the action, and redirects to ball handlers. Focused on by opponents, plays aggressive football, and works hard. Relentless and displays a good head for the ball.

Negatives: Does not consistently play with proper pad level and gets out-positioned from the action. Consistently tied up by a single opponent. Not much of a pass rusher.

Analysis: Loudermilk is a hard-working defender with size, growth potential, and a good degree of athleticism. He must improve his strength at the point but comes with an upside.

Loudermilk heads to the 2021 NFL Draft with an incredible athletic heritage. The Kansas native excelled in multiple sports at West Elk High School. He earned first-team All-State honors in basketball, while he won a conference title in the shot put. Additionally, Loudermilk was an accomplished baseball player, but it was on the football field where the man amongst boys truly excelled.

He was a three-time All-District and All-Area honoree. However, it was his senior season that really stood out. Loudermilk logged an impressive 97 tackles, 2 sacks, and 2 interceptions while also snagging 5 touchdowns. He earned first-team All-State honors while West Elk went 10-1 and earned their first-ever playoff win.

Even before his standout senior season, the gargantuan athlete was garnering attention. A three-star recruit as per 247 Sports, he had received offers from Vanderbilt, Minnesota, Texas Tech, Oregon, and Wisconsin prior to the season. Midway through the year, he paid a visit to Madison. And despite making multiple visits elsewhere, in early January, he committed to play for Wisconsin.

Arriving in Madison at nearly 6’7″ and only 270 pounds, Loudermilk needed some seasoning before suiting up as a Wisconsin defensive lineman. He redshirted in 2016 before making his debut against Utah State in 2017. Although he contributed 11 tackles, 1.5 tackles for loss, and 1 sack for the second-best defense in the nation, his game time was limited to action in 11 games.

Having lost time to injury in 2017, Loudermilk lost another four games with knee and ankle issues in 2018. Despite those injuries, however, he made his first of six starts against BYU.

With the gradual increase in playing time came an uptick in production. Loudermilk registered a then-career-high 4 tackles — including 1 tackle for loss and a sack — against Purdue. He also put his incredible size to use batting down 3 passes at the line of scrimmage.

Over the next two years, the Wisconsin defensive lineman became a full-time starter, logging 20 starts despite a shortened 2020 season. He registered almost 37 tackles, 7.5 tackles for loss, 5 sacks, 5 pass breakups, and 2 forced fumbles.

Demonstrating the ability to be disruptive on the biggest stage, he had a commanding performance in the 2019 Big Ten Championship Game against Ohio State. Albeit in a losing effort to the Buckeyes, Loudermilk had 5 tackles, 1 sack, and 1 forced fumble.

Loudermilk’s size and relative athleticism should see him receive late-round attention in the 2021 NFL Draft. The Wisconsin defensive lineman is listed as a defensive end by the program, but he has multiple potential alignments in the NFL. He can line up as a 3-4 defensive end or as a defensive tackle in a 4-3 scheme.

Because of his versatility, there are multiple potential landing spots for Loudermilk. Some teams that represent a good fit include the Chicago Bears, Tampa Bay Buccaneers, and the Green Bay Packers.